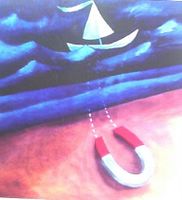 The power of curiosity and personal interest.

To follow up my previous entry it was interesting to come across the story of Bob Clifford in Michael Mants book Intelligent Leadership.

Bob Clifford , an Australian, is a boat builder extraordinaire who made his name designing the huge 'cat' boats to ferry cars in Tasmania when a major bridge collapsed. His 'cats' are now in operation worldwide.

But at school this entrepreneur felt inadequate failing the entry test into high school. He was sent to a private school and failed everything there – including woodwork, and failed his final exams. He didn’t even try to pass.

Significantly he began to read around 13 or 14 as a direct result of a new found passion , sailing. Interested in the technology and techniques of sailing he read every thing he could about the subject. He began to read when reading had a serious purpose; one that engaged his curiosity.

Mant reflects that what would have happened to Clifford if he hadn’t been exposed to sailing when he was at his private school? Sailing unlocked his intellect and was to later kick start his successful career.

Bob Clifford was a bright kid but not in the way that school teachers generally recognize.

People, like Bob Clifford, who fail school, need to feel capable about something. Too much continuous failure seems to be corrosive. Clifford was lucky. Others students who fail ‘school’ use their ‘intelligence’ in more destructive ways.

I guess we all know of people who failed school but have been successful in life - and vice versa. And we know of the number of adults in prison, in part, as a result of school failure.

The answer to this paradox is for schools to become aware of a full range of intelligences as defined by Howard Gardner. Michael Mant concludes his chapter on Clifford (in which he states he is now a real leader) by saying,’If I had anything to do with the education business I would want to understand how the possessor of a prodigious intelligence like Bob Clifford could have been regarded as a dunce at school. As Prime Minister, I would require my education ministers to get to the bottom of this conundrum – just to make sure that, in the future, not too much native Australian wit was junked for want of recognition.’

Creating schools as learning communities to develop the talents of all learners would be a start.
Posted by Bruce Hammonds at 10:43 am

Great! Sounds dead right to me!

It would be interesting to look at samples of those who passed and failed the old School Certificate exam to compare what they have achieved in 'life after school.'

Surely any education system to be successful must value the perspectives and interests of it's students.

It seems that most people learn what is important to them in spite of their education rather than because of it.

Does seem obvious to me.