A lost voice for creative education - time to call it a day? 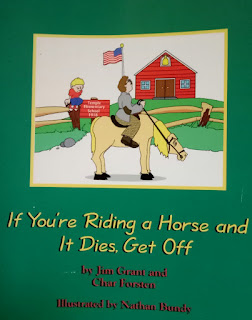 Time to call it a day?

Our Leading-Learning blog has a long history.

It began as Primary Arts Magazines set up by Wayne Morris and Bruce in 1980. Over 25 editions were printed. They were hand compiled and posted and when subscribers got over 500 it was all too much.

The premise of the magazine was to share the ideas of creative teachers – teachers who were developing student centred programmes with an emphasis on using the local environment, the importance of the creative arts and develop stimulating room environments featuring student work.

Wayne and Bruce then developed a website in the 90s with an associated e-zine which was sent out to 4000 members – this worked well until, with a change of web master the e-zines were rejected as spam by many schools.

At this stage Bruce established the Leading–Learning blog in 2004 and in later years Allan Alach joined him in this. 1569 blogs have been posted with a total of 2 million visits.

Tomorrows Schools have had a corrosive effect on school collaboration

Public schooling has been distorted by the competitive ethic of self centred Tomorrows Schools and, in particular the corrosive effect of National Standards.

We now feel that it’s time to call it a day as we no longer have any real contact with schools and we also feel that schools have been hi-jacked by standardised teaching, an over emphasis on literacy and numeracy (nine years of National Standards has all but killed real creativity in primary schools). We wrote about this sharing Professor Peter O‘Conner’s view in our last blog. 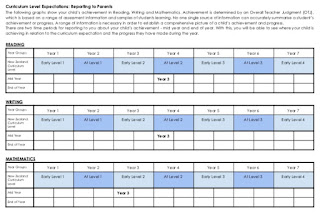 The last straw.Above a impersonal school report with a antiquated narrow focus from a large school. The sign of a system gone terribly wrong. What gifts and talents have been developed? What key competencies have been identified and amplified?

It is an interesting challenge to reflect on the influences that have contributed to your educational philosophy - this would make an interesting staff meeting topic? 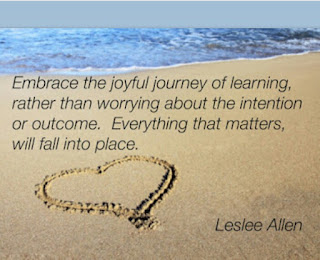 Bruce has had a long career as a school adviser beginning in the 60s – first in science then in art. Bruce and Allan Alach were both influenced by philosophy expressed in the inspirational book In the Early World written by Elwyn Richardson.  Thankfully the book has been recently reprinted by the NZCER and we recommend all schools buy a copy.

As an adviser, in the mid-sixties, Bruce was influenced by teachers, mainly in small rural schools, who were implementing similar ideas to those written about by Elwyn. Central to this creativity (it was the 60s!) was the influence of Dr Beeby who had introduced a developmental teaching philosophy post WW2.  Also behind such ideas was the philosophy of American educator JohnDewey.

TheArt Advisers, established by Dr Beeby, assumed an important role in spreading the ideas of creative teachers. The art advisers ran related arts programmesthroughout New Zealand, one of which Bruce attended. The arts are vital to ensure students a positive sense of self – through art, language, music and dance.

Teachers in rural schools introduced the first integrated programmes moving away from the heavily timetables programmes, with an emphasis on literacy and numeracy, of the day. Schools, under the pressure of National Standards, have move back to these programmes. 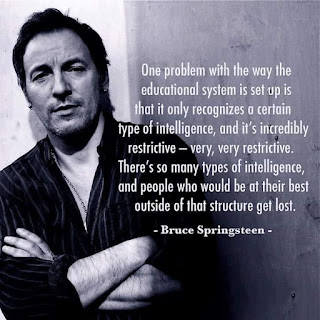 Firstly, the English child centred primary schools (sadly lost under the pressure of the National Curriculum, testing and league tables) that Bruce experienced while teaching in England in 1969. This experience taught Bruce about the importance of slowing the pace of student work to develop quality, teacher displays to attract student curiosity and of displaying students work.  Bruce worked with a group of Taranaki teachers in the 70sintroducing the open ended integratedinquiry programmes using the Nuffield Junior Science Project as a resource.

The second influence was the open education movement from the United States which had a similar student centred inquiry philosophy and led to the development of open plan schools. John Holt’s books HowChildren Learn and How Children Fail were key books and more relevant than ever. 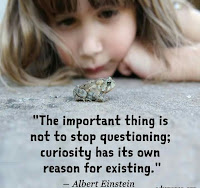 The third influence came from the lateKelvin Smythe and his holistic developmental approach. Kelvin believed strongly in the importance of the affective in education and deplored the current fetish of objectivity.

The final influence was Bruce’s involvement with the University of Waikato School of Education Learning in Science Project – essentially an inquiry model that valued students’ prior ideas and set out to challenge them.

It was an amalgam of the above ideas that Bruce developed as a classroom teacher, school principal and later working as a school adviser for Massey University School of Education and then independently throughout NZ and internationally. At this point Bruce met up with Allan Alach, then a school principal, who shared similar ideas. 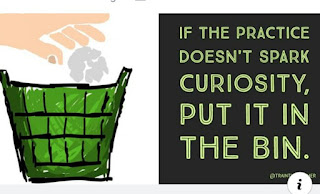 The centrality of the creative classroom teacher.

Central to this philosophy is the centrality of the creative classroom teacher to any real lasting innovation - a position that has become almost untenable under the last decades of compliance and standardisation. Time to call it a day?

In the late 70s one of our open education ‘gurus’John Holt, (author of How Children Learn and How Children Fail), disappointed us by giving up on schools ever being transformed in his book ‘Instead of Schools’.

It didn’t deter us them but we have now almost reached the same conclusion. Almost, because we know there are still teachers out their battling on, and with the change ofgovernment, maybe the spirit of the 2007New Zealand Curriculum will be implemented. Maybe? We have done our best.

What has really changed the past three decades - not much in our opinion - that is if you ignore the false promise of modern technology which is no 'silver bullet' and more often a distraction an also the recycling of open plan schools of the 70s with modern learning environmnts.

The other day Bruce was asked what would he do
if he had a magic wand to transform schools? 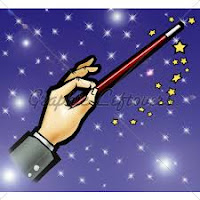 The first thing would be to ask the question of what’s the point of school? And what teaching beliefs would underpin such a school?

Bruce has always believed the challenge of schooling was to identify, develop, amplify and enhance to gifts and talents of all students.  The word education comes from ‘to bring the gifts out’. This view is reflected by Sir Ken Robinson’s quote ‘creativity is as important as literacy and numeracy’ and also Guy Claxton who has said ‘learnacy is as important as literacy and numeracy’.
Making certain students’ developed positive attitudes towards all areas of learning would need to be assured.

The role of school is to create those conditions that make students want to learn; not have to learn but want to learn more about self, others, and the world. The teacher’s role is to help the learner 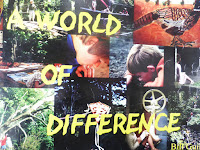 forge connections between what he or she wants to know and what a learner wants to learn.

What if we started with the premise that school could be the most interesting place in a young person’s life? The challenge is to create experiences and contexts in classrooms where students can discover things they don’t know they love by implementing project that spur creativity, ownership and relevance. 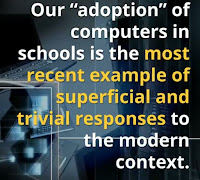 through the senses and that information technology can be integrated in such learning but that it is no ‘silver bullet’ in itself.

Projects would be based around students’ questions, value their current theories, and challenge them to consider new views. This does not leave studies to students to decide – the teacher’s role is best summed up by Jerome Bruner ‘teaching is the canny art of intellectual temptation’.

Literacy and numeracy would be learnt through real contexts and help given as an when necessary.The current emphasis has not improved our reading scores on international tests and maths still creates a feeling of maths anxiety. So much current teaching is based on the premise that without teachers students wouldn't learn - time to create the conditions and trust students do what they do naturally - learn!

Literacy and numeracy need to be re-imagined as foundation skills best learnt in real contexts .

The artistry of a creative teacher.

Bruce believes that the feeling from completing an excellent piece of learning - exceeding ones personal best - in any Learning Area is the most powerful motivation of all.  Helping students who exhibit lack of ability/interest achieve a sense of pride in any activity is the artistry of a creative teacher - a teachers who is able to slow the pace of work to allow positive interactions

Bruce also believed we do not have an ‘achievement gap’ but more an ‘opportunity gap’ – the school’s role is to create the conditions to give every learner the opportunity to learn through having positive experiences (this would mean the banning of ability grouping).

The teachers appointed would need to align all their interactions with their students behind such ideas. Teachers would be selected also for their diverse set of interests because Bruce believes that we learn from the company we keep areas of learning would need to be assured.

The total environment is the ultimate teacher.

Bruce sees the total culture developed as the best teacher. Establishing a ‘tempting’ environment to attract students’ curiosity is the challenge for teachers.  To achieve this the schools needs to be envisaged as an amalgam of an artist’s studio, a science/technology lab, a media centre, drama and music areas, and plentiful areas to exhibit and display student creativity – an educational Te Papa – where students and teachers work together in teams solving problems and displaying their results for all to see.

And as for assessment – just check out the portfolios of the students’ involved. The concept to be valued is for every student to better their own ‘personal best’. 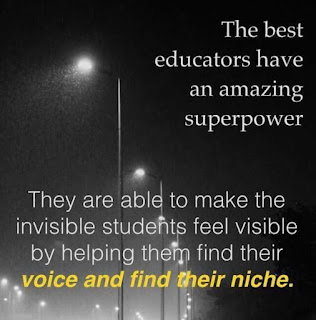 Imagine how schools would be transformed if such ideas were implemented?

Professor Peter O’Connor’s article about the killing of creativity.
http://bit.ly/2RKuJSc

The importance of the arts in the development of the self
http://bit.ly/2r1R539

Helping the students answer the question who am I?
http://bit.ly/2WtyYXi

How to organize the school day in a 21st Context
Link to reading. 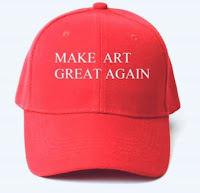 The need to slow the pace of work the key to quality
http://bit.ly/2KTX0VF

In which Pooh looks for a 21st Century Education Part 3

Another instalment from Kelvin Smythe’s ATTACK series that he completed just before he died:
‘The pure, uncomplicated expression of education values that follows has its origin deep in our

culture. But, particularly from the mid-thirties, there was a coming together of events, ideas and people including the depression, the election of a Labour government, the political education leadership of Peter Fraser, the ideas of John Dewey, progressive education thinkers from England, the influence of New Zealand educationists like Clarence Beeby and, tellingly for what follows, Gwen Somerset, a New Zealand-born primary teacher and infant mistress.’
http://bit.ly/2XEC2QF 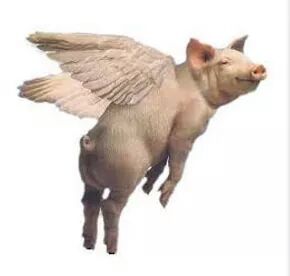 Maybe, one day,  all schools will truly be student centred and creative - developing the gifts and talents of all students.

Posted by Bruce Hammonds at 3:02 pm No comments: