Reclaiming the joy of learning 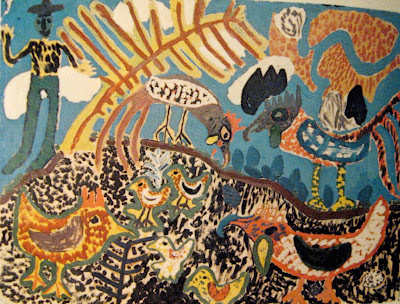 Painting from the cover of Elwyn Richardson's book 'In The Early World' re-published by the NZCER.
The ideas of Elwyn have been a strong influence in my own thinking particularly in trying to place curiosity, creativity, environmental awareness and imagination at the centre of learning. Once someone said I was ,'locked into the 60s' ( when this book was published). At the time I reacted against this but now I no longer mind. Ever since the 'experts' have imposed national curriculums on schools creativity has been at risk. Recently someone said ( but not to me) that my recent book was old fashioned . No apologies from me. The best of education is as much back to the future as it is reaching forwards. Only the status quo is unacceptable - and the imposition of National standards. We need to do the 60's again but this time properly!
It seems proper when thinking of creativity our classrooms to reflect on the writings of 1950s pioneer creative teacher Elwyn Richardson. His ideas are to be found in his inspirational book ‘In the Early World’ first published by the NZCER in 1964 (reprinted 1994).

In the forward to Elwyn’s publication John Melser writes that the book, ‘gives a vivid picture of a school full of vitality in the pursuit of values deeply rooted in the children’s lives and capable of serving them lifelong’. ‘Oruaiti School’, Melser continues, ‘functioned as a community of artists and scientists who turned a frank and searching gaze on all that came within their gambit. Curiosity and emotional force led them to explore the natural world and the world of their feelings…..Studies and activities grew out of what preceded them. New techniques were discovered and skills practiced as each achievement set new standards.’

From such environmental inquiries Elwyn’s students learnt answers, Melser writes, to the question ‘who am I? They gained respect for their and others achievements, taking great pride in their craftsmanship or artistry.’ It was a form of disciplined personalized learning set in a ‘community of artists and scientists.’ Elwyn’s work was based on an awareness of the natural world involving careful scientific observation and a demand for personal and excellence of their ideas in whatever medium used.

Elwyn’s role in achieving personal and artistic excellence was a delicate and encouraging one, always humbly ready to learn from the children. Elwyn has written elsewhere that ‘the children were his teachers as much as he was theirs’. The results were certainly not the standardization of product that one sees today; the result of over teaching. Believing in high standards to Elwyn each new creative product mattered as much as the process.

Elwyn, along with all the other creative teachers I have had the privilege of working with, responded to all children’s efforts and achievements with sincere interest and pride. His book is a testament to his love of children’s ideas and imagery and, the respect he gave their work, respect that was returned in kind to Elwyn. Elwyn gave his students Melser writes, ‘an opportunity to reach their full heights as artists, as craftsmen, as scientists, and as students’ in a ‘community of mutual respect’.

Creative teaching is not new it has just been sidetracked.

It is this vision of creative teaching that has inspired me and one reinforced by the all the creative teachers I have seen over the years. Creative teaching ideas though have a long history leading back to such writers as John Dewey who wrote about similar ideas in early years of the 20th C in such books as ‘Education Through the Arts’ and ‘Education through Experience.’ In the United Kingdom, after the dark days of World War 2, innovative teachers made a break from the arid formalism of pre-war days, and developed child centred programmes leading to official approval expressed in the 1967 Plowden Report. In the US an ‘open education’ movement added to the impetus. Ironically official approval was a kiss of death as teachers scrambled to get on to the bandwagon. Creativity it seems works best when working for a change. In New Zealand, under the leadership of the then Director-General of Education Dr Beeby, similar ideas were being encouraged – ideas that were also soon under attack from conservatives but not before creative teaching was at least established. Richardson was working in these times. Creative ideas were spread throughout New Zealand by means of art advisers led by their charismatic National Director Gordon Tovey. The art advisers ran Related Arts courses, spreading the idea of integrated learning. I was lucky enough to become involved in the mid 60s and during this time assisted a local teacher to develop the first six week integrated unit in our province based around exploring the life in a local stream.
And today our reactionary Education Minister is dismantling the last of the Art advisers to focus on literacy and numeracy not realizing the problem is engaging learners not measuring them! 'Learnacy', to quote Guy Claxton, 'is more important than literacy'. And Sir Ken Robinson who says, 'creativity is as important as literacy or numeracy. What is really required is to return to the approach of Elwyn Richardson and to integrate it with the power of ICT.
The Taranaki approach to creativity.

In the 70.80s group of Taranaki teachers became well known for what was called ‘environmental’ or ‘quality’ education. Encompassing many of the above ideas the teachers involved believed strongly in making use of the immediate environment, and the need to value effort and perseverance so as to achieve quality work. A particular feature was the stimulating room environments featuring displays of student’s research, language, observational and creative art. Key phrases used by such teachers were the ‘need to do fewer things well’ and to ‘slow the pace of students work’ so as to allow time teachers to come ‘alongside the learner’ to provide assistance. Aspects of this quality learning are still to be seen in local schools today but now as whole school approach. One important idea creative teacher’s hold is that process of achieving success is itself a powerful transformational experience – providing such experiences is the challenge for teachers.

From my experience, then and now, I believe that all real lasting educational change will only come from such creative classroom teachers particularly if it is a whole school ‘learning community’ approach. Unfortunately, since the late eighties, the climate has changed against such creativity as we entered recent decades of standardized curriculums and imposed compliance requirements. It is reassuring to still find creative teachers working away ‘under cover’ throughout New Zealand and it is to them that we must look for a creative revival.
Posted by Bruce Hammonds at 4:59 pm

I think you are right Bruce.When those who appreciate the full power of ICT link up with those who believe in the power of first hand investigations and creative expression we will see a true creative revolution. Not much so far is there?

Bruce you are old fashioned!!!
The ideas in your new book are certainly not and I trust lots of people read it and take on board the many ideas and messages about creative classrooms.
Then they need to look further at how this creativity can incorporate 21st century resources for 21st century kids.
If this doesn't happen soon I believe schools will become redundant for those who value education.

Not sure that I am that old fashioned ( just old) but I do believe that in the rush to impose all those strange curriculums on schools in the 80/90s we lost sight of the creative work of earlier decades. Actually a lot of the ideas in my book are not new it is just that may have been overlooked.If teachers can itegrate ICT into such ideas then we would be moving into the 21stC. Currently our populist government is taking us back to a Victorian 3Rs curriculum with their reactionary national standards. I never fully trust populist politicians.