John Dewey an educator for the 21stC 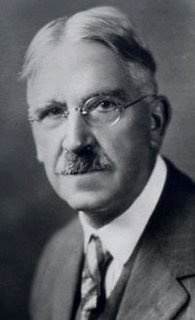 I am a John Dewey fan from way back although I have only read one of his books thoroughly, ‘Experience and Education’. Published in 1936, essentially written in light of criticisms and misconceptions his ideas had received.

Progressive ideas were under attack by traditional critics. Dewey felt the need to clarify his position, writing that he believed there needed to be a movement to build on the best of the ‘old’( traditional ) and the ‘new’ ( progressive). The same division remains with us today – between those who see education as a means of transmitting ‘agreed wisdom’ on one side, and those who place an emphasis on a process of ‘learning how to learn on the other.

Dewey, credited with being a key figure in the Progressive Movement, was concerned that his ideas had been misunderstood.

Dewey placed a premium on student meaningful activity in learning and participation in classroom democracy. His belief that students must be ‘invested’ in what they are learning echoing calls today for school to present ‘rich, real and relevant learning’ to combat growing student disengagement.

As for democracy few school, to this day, have begun to implement his ideas but there is a growing demand to return schools to their communities as people lose faith in distant 'experts' to solve their problems. Secondary schools, in particular, remain impervious to democratic ideals to this day. Dewey did not see education as a rehearsal for life writing that, ‘How a child lives today so will he live tomorrow’. Today we would say that ‘culture counts’; we are all shaped by the not so ‘hidden curriculum’ of schooling.

Schools, according to Dewey, ought to be seen as an, ‘Embryonic community, active with types of occupations that reflect the life of the larger society and permeated throughout with the spirit of art, history and science. When the school introduces and trains each child of society into membership within such a community saturating him with the spirit of service, and planning him with instruments of effective self direction, we shall have the best guarantee of a larger society that is worthy and harmonious.’

This would make a worthy introduction to a new national curriculum or school vision. For Dewey education and democracy are intimately intertwined and he would be appalled to see education distorted to the service of economic needs.

The clash between traditional and progressive is alive and well today – on the one hand, relatively structured, disciplined, ordered didactic traditional schooling v relatively unstructured, free student directed progressive approaches; or primary v secondary with middle schools being ‘muddle in the middle.’ It is as ‘inconvenient truth’ that few seem concerned that the primary and secondary school are worlds apart and as a result too many students either ‘fall between the cracks’ or enter secondary schools to experience it as a ‘different country speaking a different language’.

Dewey wanted to move beyond the either/ or mentality (or, as referred today, ‘mindsets’) and believed in learning through experience; experience that was to be judged by the effect it has on the learner. Dewey criticized traditional education for lacking a holistic understanding of students’ lived experience, focusing on content rather than content and process. On the other hand, he argued, progressive education takes a too free approach without involving students in in-depth learning.

Dewey wanted to move away from this ‘ether/or’ mentality. This dichotomy remains the challenge to this day and is felt most strongly in the few schools that include the full range of age groups.

Dewey believed in learning through quality experiences that had the power to develop a new consciousness in student's minds . Any experience would not do – some he believed were counter productive. Experiences must be judged by the effect it had on the learner. He did not believe in students following up any old interest (leading to a form of mindless ‘trivial pursuits’). Education, he believed, needed to take into account students previous experiences and then provide them with further experiences to help them deepen their understanding. The teacher’s role was vital to design challenging learning experiences, to interact with the learners, and to provide a series of liberating experiences; all to ensure quality learning emerged. Those who follow a ‘co-constructivist’ approach today will recognized the challenge Dewey was suggesting. This was a long way from the ‘free play’ of the critics.

Dewey’s’ idea excite to this day. His challenge to transform education to develop both democratic ideals and powerful learners remain with us and are even more important as we enter, what some call, ‘the age of idea and creativity’.

For too long an industrial age model of mass education has constrained the creativity of both students and learners. It time for the followers of Henry Ford (‘you can have any colour want you like as long as it is black’) to remove their legacy of, timetables, bells, disconnected learning, and production line mentality.


John Dewey would recognize those who are calling for an educational transformation to 'personalize' learning so as to realize the talents and creativity of all students.

He was once asked for the easiest way to transform schools. He replied it would take ten thousand angels from heaven to change schools, but the miracle, he continued, would be for teachers to do it for themselves.

Nothing has changed but the new draft is a begining, Dewey would be in full agreement with the statement that all, students should be, ‘active seekers, users and creators of knowledge.’
Posted by Bruce Hammonds at 12:59 pm

One writer calls it 'the half finished revolution' with reference to the idea that progressive ideas have not 'crossed' into the secondary system. The only secondary schools that have allowed the 'light' in are new schools, or schools with nothing to lose. In the meantime kids vote with their feet and learning is available anytime , anyplace, anywhere, as and when needed, on the world wide web!

Dewey makes real sense - who are his modern equals? No matter, his ideas still, as you say, excite.

How come traditional Headmasters of 'posh' state schools seem to hold all the 'newspaper power' - they are aways asked for their views about innovative ideas - a bit like asking the Queen how she feels about abolishing the monarchy! No wonder John Dewey's ideas did make it to the Secondary level!