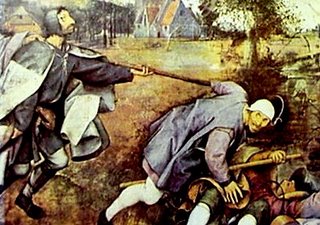 No point in the blind following the blind!

I found an article I cut out of the paper last year about leadership and its ideas are worth sharing.

Leadership, it says, is as much an overused term as it is vague.

What is more interesting the writings on leadership has changed over the decades.

Thirty years ago the thinkers were talking mainly about outcomes and management by objectives. This will still sound familiar in education today. Fifteen years there was a heavy emphasis ago on processes such as Total Quality Management (TQM) and such thing as re-engineering. Quality management collapsed into measuring everything and nothing. Again another familiar idea to schools with the current emphasis on 'targets' and 'evidence based teaching'.

Today the references are towards ‘imaginative capital’, 'dialogue', ‘realizing not yet enacted realities’ , ‘co-creation’ and ‘distributed, shared, or inverted leadership’.

The emphasis now is not doing what you do well (and spending endless time and energy proving it) but now leaders have to think forward rather than project the past. ‘The new requirement', the article states, 'is to be creative – in the sense of creating something not seen before’.

This leaves leaders with two problems. One is how to come up with ways of developing new ways of doing things and the other is to do this while still keeping the organization well managed and on course. Teachers in creative classrooms will know the feeling.

Leadership must now be ‘entrepreneurial’ and this may mean getting younger members to lead teams ('inverted' leadership) or projects because the more established managers are past it. Just think of who has the ICT knowledge in our schools.

Even though creativity and innovation are felt important few leaders have any idea of what it means in reality, or how to go about doing it. All too often incremental improvement is the result.

How to create the conditions to release creativity is the challenge; any organization that is heavy on checking up, or evaluation, will find it impossible. Creativity requires an environment that encourages 'risk taking and mistake making' and this requires considerable leadership courage.

It is far easier to fallback on ensuring efficiency; proving what you are doing is done well. This will really feel familiar to principals’ particularity with the possibility of an Education Review Visit on the horizon. This leads into a timid, 'blind following the blind', mentality.

Future leaders will have to become more skilled at developing creativity and living with the complexity and uncertainty that goes with it. Leadership will have to be a more exploratory than analytical process.

Final advice offered in the article:

Value creativity and trusting those with expertise but don’t throw away established structure until new ideas are worth the risk.

When new idea throw up complexity or confusion (which they will) keep an open mind and pursue operational simplicity. Don’t let things get to complex. Judge things on their potential to be of real advantage to future succes.

It would seem to me that future leaders will have to trust their intuition (something not valued in out technocratic era). If everyone in the organization has a stake in the success of the organization they will make the best decisions they can to ensure its success. This will require a strong culture of experimentation and trust, and an ability to learn from mistakes. People, one writer says,will make the right decision if the 'shadow of the future is strong enough'!

Advice given to me many years ago, by a friend of mine, was to remember the motto of the wing walkers (who rode the wings of bi planes after World War One), ‘Don’t let go of something until you have a firm grip of something else.’

Good advice when you are taking risks?
Posted by Bruce Hammonds at 12:24 pm

The Ministry and principals are locked into a leadership model that is well past its 'use by date' - but no one seems to know.

'Creative' - that's one word I wouldn't associate with the Ministry or principals! Nor intellectual courage or integrity - it is a case of the blind leading the blind!

Principals seem to accept anything the Ministry throw at them ( like 'key competencies') - Primary principals that is; secondary ones just ignore them!

We forever fall over ourselves to follow ideas that eventually fail in the countries they are pinched from, ignoring the creative talent we have in our own country in the process. Who are these people who work for the Ministry? Time for a clean out I think!

Like for example 'key competencies, a highly un-original idea ( but useful), that is being turned into a nightmare with attempts to assess it that they are currently trialing.

The key to our country is developing talented people - is that too hard for them to understand? Considering talent is not a word I would use for the Ministry employees it is!

Creative leadership requires going beyond seeking official acceptance through the usual channels such as ERO reports. How many principals think they have some how made it when ERO gives them the big tick? The reality is always significantly different to the official view and the more essential concerns of real learning for the sake of learners can easily be overlooked.

All ERO is is a glorified warrent of fitness (WOF) - as long as you comply you pass. It does not make the school a creative school. Possibly quite the opposite as schools clamber to show that they are achieving their 'targets', none of which would ever refer to creativity!

Coudn't agree more.Having visited schools that have received excellent reports I sometimes wonder if we come from the same planet.Mind you, reviewers carry the same faulty thinking as those they assess, coming from, as they do,the same limited gene pool - a case of the blind informing the blind.

A problem with this is that so much is 'being held onto with such firm grips' that those at the chalkface who would be creative given the space and encouragement have not the bravery, or energy, to be so.

I fear, for most teachers and principals, you are right - they just want to do what is expected of them and get on with their life. For advances, in any area, we depend on those not frightened to let go; who enjoy the risk of challenging current 'wisdom'; who make tracks rather than follow them.