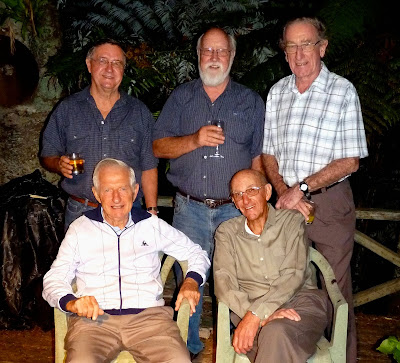 Last week all the key figures involved in what came to be known as the Taranaki Environmental Approach were in town. It was too good a chance to let go by so a party we had. Also invited were others who became involved, or who were involved in creative learner centred education. May be there were similar groups elsewhere in New Zealand but ours was a special group whose influence is still to be seen, if not recognised, today.

In front Howard Wilson and next to him Bill Guild. At rear Robin Clegg, Bruce Hammonds and John Cunningham. The term environmental was used in the sense teachers created student centred learning environments and many of their studies utilised the natural, historical and man made local environment.

Such groups do not emerge without precursors.

After World War two there was a feeling that traditional schooling ought to become more democratic. Even earlier, the first Labour Government under the leadership of Education Minister Peter Fraser had began this change . An important figure at this time was Dr. Clarence Beeby the Director of Education. All sorts of other influences could be sited, non the least, educational philosopher John Dewey who wrote widely in the early 1900s about the need to transform education to be more learner centred. Just before WW2 there was a New Education Conference held in New Zealand where a number of respected world educational thinkers visited and toured New Zealand. One visitor was English Educator Susan Issacs, one of the first people to focus on how young children learn. Also included there were a number of highly respected art educators. According to an educational commentator Jack Shallcrass people lined up in their hundreds to hear these new ideas.

During the 60s new liberal curriculum's were introduced and Dr Beeby established specialist teachers in art , nature study and Physical Education to assist teachers develop new ideas. The art advisers in particular, led by the redoubtable National Art Adviser Gordon Tovey, were seminal in spreading ideas about creative education and in the process building teacher confidence.

In the photo above two members were involved in this first stage were Howard Wilson and Bill Guild. In the sixties the art advisers arranged course in integrated programmes that they both attended along with myself. I was then a nature study specialist ( later to be transformed into a science adviser). Both Howard and Bill agree that it was during this time that the most dramatic changes occurred in education as they pioneered integrated studies. Up until then the day was tightly timetabled and teacher directed. Children were age grouped into standards and many were held back if they were not able to reach the standard. In the UK, in earlier times, teachers pay was linked to the number of students achieving the standard ( 'payment by results').

The need for a wide range of advisory teachers to be appointed to assist teachers ( as against the current governments move to only appoint literacy and numeracy advisers).

The need to value the expertise of creative teachers and schools and, along with this, the need to find ways to share their ideas ( the power of networks using the Internet seems obvious)

The real innovations of the group above were developed in the early 1970s.

Missing from the above photograph are two English teachers Chris and Marion Keeble. Both In the late 60s Taranaki teachers led by the science advisers ( Don Capon and myself) had introduced student centred science learning ideas from the Junior Nuffield Science Project. English Junior school were highly regarded as models of child centred learning and in 1969 I arranged to spend a year to learn more about the approaches being used.
recently visited New Zealand and Marion had taught in New Plymouth in 1970.

During this time I met and taught with both Chris and Marion. Both since became respected head teachers. Marion a gifted all round teacher and Chris with real expertise in mathematics. Their work transformed my thinking.

It was the ideas of such teachers that I helped introduce when I returned to New Zealand in 1970. Ideas we 'imported' were: making greater use of student's interests and the immediate environment, introducing studies through displays, slowing the pace of work to achieve quality work ( and to allow time to come alongside students to help them as required), rotational group throughout the day, and placing an emphasis on creating stimulating room environments with well displayed students art, language,
mathematical investigations, and study work.

Bill Guild , Robin Clegg, John Cunningham and later Bruce Hinton became integral to the approach and many other teachers joined in to varying degrees. One other important member (also present at the party)was Wayne Morris who, along with myself, developed a range of publications to share the ideas leading to the establishment of our website leading-learning. We also shared books on creative teaching from the UK and the US. As an adviser I was able to act as a liaison person Another important individual was Bill Clarkson.

The other inspirational influence to us all was the book 'In the Early Wold' written by pioneer teacher Elwyn Richardson based on his work in the 1950s. Our group made contact with Elwyn. We believe 'our' approach combined the powerful but individual art and environmental approach of Elwyns with the more craft, focused observational and school wide approach I had seen in England.

The ideas still live on today but they have had to accommodate, in recent years, imposed curriculum,assessment regimes and formulaic 'best practices' approaches to teaching which has resulted in less individual creativity for both students and teachers. A real advance has been a more whole school approach although this has also resulted in limiting the creativity of individual teachers. In the UK creative teaching ( which was patchy in many respects) was replaced by a National Curriculum with defined learning areas arranged in levels, learning objectives and national testing. This technocratic approach was imitated with a similar National Curriculum in New Zealand but without the testing regimes -so far.

In 2007 the 'revised' New Zealand Curriculum provided the inspiration for a new creative era with its vision of 'life long learners' and for students to become 'seekers, users and creators of their own knowledge'. Unfortunately this has now been subverted by the demands of the new conservative government who have looked back to the idea of standards in a narrow range of learning areas. Most schools, as mentioned, seem to have been captured by formulaic teaching and a narrowing of their curricula. Many schools seem oblivious to the dangers of this audit and surveillance ideology unaware there are creative alternatives past and present.

It is again time now for some new creative leadership this time by principals. Creative principals need create the conditions to release the creativity of their teachers and to network with other schools to share their more creative teachers' expertise.

I wait in anticipation.

Thankfully there are signs of networks of creative principals and teachers emerging.

We have all had our turn; but the creative cycle continues. As someone said we need to do the 60s again but this time properly!
Posted by Bruce Hammonds at 4:34 pm

What an interesting history you outline Bruce. I doubt if there are many teachers who can think back to those early days. And I agree with you about the importance of Elwyn Richardson's work -and the art and science advisers. You, and your colleagues, have made an important contribution to creative education in New Zealand. I also agree with you that it is dark times for creativity at the moment.

In our 'hey day' we had to fight for what we believed in but we didn't have the narrow minded, rear vision, technocratic managerial thinkers in the Ministry of Education to contend with.

For all that our power was our networking with each other. Networking is the only way to confront such managerial nonsense at both at the school level and Ministry compliance requirements.