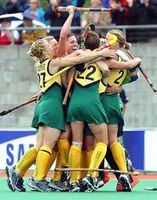 Everyone a leader. A model for schools?

The only team in the world without a captain is the side that doesn’t need one, the Australian woman hockey team, the Hockeyroos. After winning back to back Olympic Golds they have established themselves as the most successful sporting team in Australia.

Their Coach Ric Shuttleworth dispensed with the idea a few years ago. The innovative coach reckoned captaincy was an anachronism that belonged to a different age.

‘Ask yourself’, says Professor Frank Crowther recently in NZ to talk to beginning principals, ‘what the implications for a school might be’. Shuttleworth did away with the captaincy but to say his Hockeyroos were leaderless is far from the truth. They had leaders all over the field, they don’t have single captain but they might as well have eleven. Shuttleworth talks of having a ‘critical mass’ of six, seven or eight trailblazers.

The whole idea is to develop leadership qualities in every player. The very least that can be said is that the Hockeyroos were disciplined all over the field. They were also wholeheartedly committed, if there was any fighting it was over who should swoop on a loose ball.

Those who take orders are very good at giving them in a team of equals. It is all part of the Hockeyroo ethic, which encourages players to strive for greater goals commitment, thoroughness, team play, time management and personal development. Players must be able to fit two or three positions increasing their overall value to the squad and allowing scores of extra options.

Crowther had two of the girls as students at the University of Southern Queensland and he asked them about their preparation for the Olympics. The analogy of swooping on a loose ball is what educationalists have in mind when they talk about collective responsibity, or distributed leadership, in a professional community; everyone taking a collective responsibility for any issue that might come up, as opposed to it’s your responsibity because that kid is in your class. Swooping on loose balls does represent a different kind of paradigm, says Crowther.

If it works for the Hockeyroos why wouldn’t it work for schools, asks Crowther? It is Crowther's view that we have to look at a different concept when we look at school leadership. He calls this concept parallel leadership, introducing the importance of teacher leadership, which he says is of equal importance to principal leadership. You can’t compare them because they are two different things. When you get them both in place then you can sustain school improvement over a significant period of time.

I can only think of one school where this distributed leadership applied. And this school exhibited both alignment and consistency and individual creativity and innovation. I have however seen something similar in the relationship between teachers and their students in lots of creative classes. It all about trust and sharing power.
Posted by Bruce Hammonds at 8:40 pm

For over a decade teacher's 'voices' have not been listened to - Crowther's article signals a beginning of a new era for teachers; one that values their leadership contribution? Sounds good!

Teachers felt more like their own 'experts' before 'Tomorrows Schools' - but that is distant but not yet totally forgotten history.

What is required is professional trust once you show to your peers you can do the job! To much, 'have to record and prove it these days!'

As you say it is all about relationships between people who trust each other.It is about the power of a shared culture of teaching.

The culture is the 'big picture' we have lost sight of; we are all too busy fiddling around with the pieces to even think their might be a guiding pattern of relationships.