A process to develop a School Vision 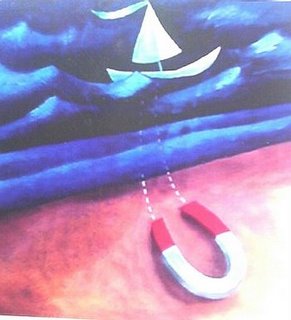 A vision is like a 'force field' of shared beliefs that 'atracts' people to work together particularly in times of crisis.

I was asked recently about some ideas about a process of helping schools develop a shared vision.

I think the important statement is helping the school to develop their own vision. It is all too easy to adapt one, or for the principal to impose one (after a shallow process of collaboration) but, unless all involved feel they have some stake in it, it will not really make much difference.

'Ownership' is the key thing in any learning.

The following is a simple but powerful process to 'tap the wisdom' of all involved but one that demands shared leadership, particularly by key people in the school – and of course total commitment by the principal. All involved must see the benefit of developing such a vision and be determined to see that it is reflected in the: values the school believes in (as seen by behaviors of students, teachers and parents); and the agreed teaching beliefs of the school.

The final shape of the vision, values and beliefs might not be finalized for a year or two and will only be seen to be imbedded through the actions of all concerned. As such it needs to be reviewed regularly and monitored to see how well it is being implemented.

If it is not seen as the most important aspect of the school by all it is not worth doing. Many visions, as impressive as they may look, count for little. The visions can only be seen in the actions of all involved. Developing this alignment is the role of leadership.

Vision provides direction
Values acts as a moral ‘compass’ to ensure behaviors are appropriate
Beliefs determine the action to realize the vision.

Before you start you might want to have a discussion in small groups about what future attributes will students need to thrive in an ever changing but potentially exciting future? Think back to what might have been expected when you, your parents, or your grandparents entered the workforce. After this discussion pass out the diagram on page 8 of the 2006 draft New Zealand Curriculum.

The question to ask in groups is: What ideal schools do you want to create? What is your dream school? The school you would want to teach in, attend or send your children to? Do not be limited by how schools look today. A vision should be challenging.

Appoint a group leader and a recorder and follow the process of brainstorming and 10:4 voting outlined below. This process ensures all individual have a say ( not just the outspoken ones) and that ideas are judged by their merit.

Go around the group, each person in turn to offer a statement or to say 'pass'. No discussion is to be allowed and all thoughts are written on a whiteboard. When ideas are exhausted similar thoughts can be combined but only if those who contributed them agree. Point of clarification may be asked about any points but can only be answered by the person who contributed the idea. These 'ground rules' need to be adhered to keep the focus.

At this point each group member has 10 votes they can put along side any of the suggestions. They can only use 4 votes at time (this means three rounds) and can spread their votes or place all four against the idea they like best.

After three rounds all their votes will have been used up.

This might be enough to do at one meeting. From what has been presented a group could be nominated (the group leaders?) draw the ideas together to draw up a Draft Vision. This could be later be shared with everyone who can then make suggestions as they see fit. Changes can be made but at some point the draft vision needs to be accepted and agreed actions taken to implement it. This could be part of the School Annual Development Plan or ongoing Strategic Plan. The process needs to be reviewed at a set date (before the beginning of a new year?).

The ideas suggested by the groups will provide phrases to develop a Vision Statement, ideas for School Values and also some basic Teaching and Learning Beliefs.

It is a useful idea to select out a key phase to represent the vision. This acts as a motto for the school. A Maori saying is one idea, or an idea related to the schools name, or a reference to a local geographical feature. Often a key phrase will be one of the suggestions. If not have small competition to think of one.

A group might be formed to develop a Values Statement and could review the values listed on page 10 of the Draft 2006 New Zealand Curriculum and, if felt necessary, changes made. Later on you might like to list the behaviors you want to encourage in your teachers (add to performance agreement), parents, and students (use for assessment) and to develop into charters for each

A similar group could develop a school Teaching and Learning Beliefs or Principles from idea suggested and could refer to the Principles on page 9 and the Key Competencies on page 11 and effective Pedagogy on pages 24 25.

Specific Teaching Beliefs would need to be drawn up by the teaching team to realize the vision, values and learning beliefs /principles. A brainstorming and 10: 4 voting process could be used by the teaching team as well. If possible teaching beliefs should be listed under five or so points for easy reference – one again this could be 'pulled together' by a small group to be presented back to the staff and, when agreed to, to the Board of Trustees. The beliefs then become the teacher’s performance agreement and the basis for continuing professional development.

This brainstorming and voting process is an ideal means to tap into the 'shared wisdom' of all involved.

Whatever is developed ought to be seen as a 'work in action', continually being reflected on, used as a basis for decision making, and monitored as part of the normal School Review process.

When finally agreed to it ought to be professionally designed and communicated to everyone involved in the school.


There are ideas and examples of school visions to be seen on our website.
Posted by Bruce Hammonds at 10:18 am

What a great plan for schools to follow Bruce. This would certainly ensure that teaching and learning became the focus for what happens in schools.
Bring on the real strategic planning.

I have taken part in the process I have outlined and was impressed how much it involved everyone.Far better than by using pen and paper surveys.

What is important, and yet missing, in our lives is the concept of joint governace. The term I like is Community Governance. Essentially it is a process of active dialogue in which people engage on the understanding that they put asside differnces and actually listen to other peoples point of view. It is possible in this situation to establish a set of beliefs/values/goals and objectives that most can agree to. Not only is the process of dialogue important but also an acceptance that along with the words comes a responsibilty to accept engagement that will require actions and reporting back on these actions! All to often you will get a situation where all agree with the outcomes but then leave the work to others. Schools are one of the best places to re-establish community governance simply because of the nature of the family and extended family relationships that make up a school. So why not envision the entire school community as well as the teaching staff?

The process I outlined was meant to involve members of the community -if the community aren't behind what is happening in 'their' ' schools any vision will not work.

Unfortunately parents have been sidelined so much over the years that they often don't involve themselves.

One idea is to invite about 18/20 parents randomly and do the dialogue process with them. This number is OK to get a cross section of views but every attempt should be taken to involve parents.

Schools do not involve parents well and teachers are also loath to give parents such 'power' - but if the power isn't shared then nothing will change.

In the early days of compulsory education in America parents refused to send their kids to school -they had to be taken under armed militia!

Those parents could see what was going to happen when their childen were institutionalized.

Home schooling and small comminity schools are growing in the USA in a move to get away from the 'factory' schools that are failing too many students.

Schools could be centres for community revival if there were shared governance as you suggest.