Education is about identity. 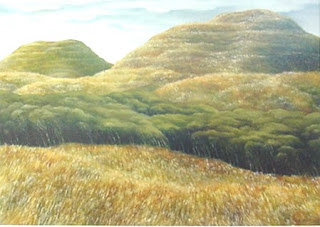 
A few years ago I listened to a radio discussion about what makes a 'kiwi' (a New Zealand identity).

One of the contributors told a story to make his point.He said he had a cousin who drove a tourist bus mainly taking Americans around. As he passed a pa site ( Maori fortification) he said to the tourists that his ancestor beat the British there, as they passed a second site he said another ancestor beat the British there as well - this went on all morning until finally an American tourist said, 'Say man, did the British ever beat the Maori?'.The bus driver replied quickly, 'Not while I'm driving the bus!'.

The listeners were left to make up their own interpretation but it was clear it was about the bus drivers pride in his own culture and as a story teller. And of course the message that whoever tells the story 'owns' the history. So it was all about identity and sense of personal voice. These are two things that are not often thought about in our school system busy 'teaching' students lots of things they often don't want to know about and in the process ignoring the students own experiences and culture.

Personalisation of learning would seem to provide the answer but it seems to mean different things to different people.To some it seem like just working with students as individuals to get them to learn what is being prescribed. For others, and this includes myself, it is placing the learners needs as central and doing everything to assist the students develop their own particular set of gifts and talents so as to develop their own unique learning identity.

'A classroom if it is to be truly successful must value and respect the ideas , viewpoints and interests of it's students' writes author Bill Clarkson in his book 'Unique Perspectives'. He continues, 'When students are genuinely engaged in their learning and pursuing things that interest them the way they respond to and express their learning will be unique.' He writes, 'What is at stake is crucial to the extent that it may determine whether or not the learner will be able to develop as an independent and creative thinking individual in control of their own identity and chosen path in life.'

This personalization is not what I see when I visit even the best of primary classes. All to often students are happily involved in developing ideas ( these days called 'intentions') given to them by their teachers ( to be assessed as 'achieved') rather than focusing on their own interpretations.

In a classroom really focused on developing each students learning identity I would expect to read personal writing around student self chosen themes - honest writing based on their experiences making full use of their sensory impressions and feelings. Instead I see writing tailored to fit into pre set criteria - and achieving the criteria seems more important than the power of the story itself! I would expect to see a range of observational and expressive art reflecting the individual style of each student - instead I see 'quality' art which all looks the same - once again restricted by pre set criteria and 'over teaching'. When it comes to student studies the same thing applies. Missing are studies 'emerging' from the students concerns and interests and, even in class studies, their questions, prior ideas, their particular points of views, their contributions to planning, presenting and evaluating their own ideas, are missing.

'Children', Bill Clarkson writes, can only be, 'expected to develop a strong sense of place, or real appreciation of where they live', if they are, ' able to investigate and learn about their neighbourhood, it's history, and natural environment'.

He writes, 'this requires a genuine desire to know and what a child thinks and why', and he says, the teachers role is, 'help children develop, clarify, modify and extend their ideas'. The interface between the students and teachers, he says, can be called an 'interactive dialogue'.

It seems if we really want personalized learning we will have to start listening to students stories and create an environment to allow students to express their real 'voice' and questions. At stake , Bill concludes his book , 'is development of the child as an independent, creative, thinking individual.'

There is nothing wrong with being a bus driver but one wonders what the driver could have been if he had experienced an education that valued him for who he might become that trying to make him into who he could never be by denying his culture and 'voice' in his own education?

If any one is interested in Bill's book I have a few copies available( $20 posted) Email me at bhammonds@clear.net.nz Full of practical examples of personal and investigatory writing.

There are lots of ideas about personal writing and interactive teaching on my site http://www.leading-learning.co.nz/
Posted by Bruce Hammonds at 11:21 am

Kids should drive their own 'buses' as you say.

'Personalisation' appears to be coming the big 'shift' in education, replacing ( or deepening?) the mass education dream of early last century? It is , as you say, more than 'individualisation', or 'customisation'. Bill Clarkson knows what he is talking about! It is about 'driving your own bus' but alwys thinking of others sharing the road.

The issue of a realistic identity for New Zealand in the 21stC is a vital one. We all need myths, or some sort of future vision beyond materialism, to sustain us.