What matters is creativity. 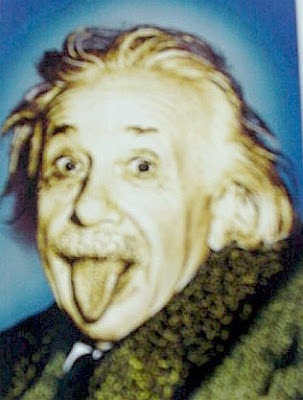 I think it is safe to say that there are plenty of intelligent people around these days but it is important to appreciate that intelligence and creativity are two different things.

Intelligent action leads to things being done well, to qualitative improvements, but does not always lead to facing up to real change - for this to happen you need to apply imagination and creativity. The trouble is our society and our schools seem to favour intelligence in the narrow sense and, as a result, creative individuals often find it hard to have their ideas listened to let alone accepted. I guess this has always been the case. The power of the 'status quo' has an inertia that is hard to overcome. And people who 'rock the boat' all to often get thrown off. Traditional and blind habit are hard to overcome as they are the very things that keep 'us' from falling apart - or at least keep those with the power in power!

The trouble is that as we enter, what some call the 'Second Renaissance' , or the Age of Creativity', what we need desperately are those with the courage to think differently about the problems we face before we are overwhelmed .

So while smart people are a dime a dozen what truly matters is creativity. As Albert Einstein said , 'Imagination is more important than knowledge.'

Einstein, along with other creative individuals , is worth a study to see what attributes we need to encourage if we really value the importance of new ideas. It is interesting to realize that a great number of creative individual, in a,wide range of fields, did not do well at school and have survived because they were driven by a passion that overcame all obstacles.

Einstein rebelled against rote learning and is was this attitude towards accepted authority that made into the genius he was. Today many students are quickly labelled with ADD ( Attention Deficit Disorder) or worse ODD ( Oppositional Defiance Disorder). As a result, since they can't apply their attention to often irrelevant and boring lessons, are seen behavioural problems. The worst cases are placed on Ritalin to keep them docile. It might be that schools are dysfunctional?

Our success as a nation will not depend on just on how well our students read and write and jump through the various achievement hurdles we set for them by their teachers, it will depend more on their passion for some aspect of learning ( their talents and gifts), their imagination and their creativity. And of course their courage, resilience and perseverance.

All of which Einstein had.

Einstein, contrary to popular myth, was not poor at maths at school but he was slow to learn to talk. This combined with cheeky rebelliousness towards authority led to one of his teachers sending him out of his class and another declaring he would never amount to much. Many successful people who failed school have had similar experiences! Later , at University, he alienated most of his professors and was the only one not to be offered a professorship. He struggled to find work, eventually finding a job in the Swiss Patent Office but it was this job that gave him time to challenge current thinking and develop his own theories.

Ironically these traits have made Einstein the patron saint of distracted students everywhere but they also made him the genius he was.

His cocky contempt for authority led him to question received wisdom. His slow verbal skills led him to thinking in pictures and to observe the wonders of the everyday phenomena that others took for granted. Schools it seem still fit those students with verbal rather than visual or artistic skills. For students with an intense curiosity and need to question must find schools impossible.

Einstein is reputed to have said, ,'Long live impudence, it is my guardian angel in the world.' Not an attribute we value these days.

If we are to value creativity, and to develop a generation of creative students, we have to ensure our schools nurture imagination and even rebelliousness. At least we need to ensure that every students desire to ask questions and exercise curiosity is never sidelined by a dull conformity and acceptance of authority.

These attributes are the well springs of genius and our survival in an Age of Creativity. Intelligence by itself will never be enough.
Posted by Bruce Hammonds at 1:51 pm

Very interesting observations! Some teachers labelled as negative or not "teamplayers" experience similar difficulties as they confront the mediocrity of their peers and colleagues.

I appreciate your point of view.

Sylvia Ashton Warner one of New Zealands most creative teachers said, 'You can always tell a creative teacher, she is the one lying in the coridoor with an arrow in her back, fired by one of her fellow teachers.'

The biggest danger to real creativity is, as you say, mediocrity, and that is a word that sums up a lot of the so called 'creative' teaching one sees today. Teachers have fallen into the trap of 'exemplars', imposed 'criteria' and obsessive 'feedback' - all of which, if used badly, kills the creativity of students. As well it presumes teachers actually know what creativity is!

Real creativity is always a rare event, in any area of life, and is, at first, impossible to assess. Creative people require a undying passion, a thick skin, protection and supportive friends to survive, until the others catch up.

Schools, particularly for older students, are nothing to do with real free ranging open ended creativity, although it does exists in some individual subject 'compartments'. Care, though, is taken to see it is kept in its place - to show to parents, at special 'cultural events, that life is not all bread and water! These events are as well, all too often, limited to self selected 'gifted' students.

Thanks 'compass point' - great to get feedback from the USA. Enjoyed visiting your site. I am planning to keep writing about creativity - real creativity is not so common in our schools.