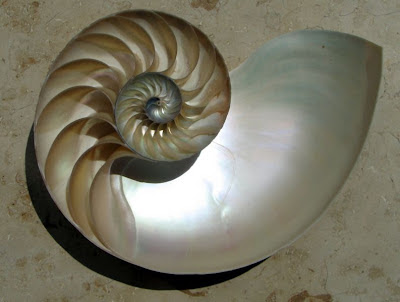 The shell of the nautilus is a symbol, or metaphor, for beauty and proportional perfection. First used on a New Zealand Curriculum in 1993 it has become a famliar symbol for New Zealand teachers. Or has it?

The ‘new’ New Zealand Curriculum introduced to schools in 2007 comes with a redesigned nautilus shell.

To introduce the ideas of the curriculum to students (and teachers) it might be worth giving thought to the reason for the selection of the image.

If it were possible to show students a nautilus shell (or a series of pictures) this might inspire some insightful thinking. We all seem to have a fascination for sea shells, most homes have a shell or two on display, and capitalizing on this fascination would result in an equally fascinating study at any level of learning.

The NZF states, on its inside cover: ‘In real life the nautilus is a marine animal with a spiral shell. The shell has as many as thirty chambers lined with nacre (mother- of- pearl).The nautilus creates a new chamber as it outgrows each existing one, the successive chambers forming what is known as a logarithmic spiral’ .This kind of spiral appears elsewhere in nature, for example, in sunflowers and cauliflowers, cyclones, and spiral galaxies.’ The nautilus (in Greek ‘sailor’) as survived relatively unchanged for 450 million years.

Even from such a brief summary creative teachers ought to be able to envisage a range of lines of inquiry covering a number of learning areas from natural history, mathematics to the development of aesthetic interpretations of shells.

The NZF continues: ‘Physician, writer, and poet Oliver Wendell Holmes (1809- 96) saw the spiral shell of the nautilus as a symbol of intellectual and spiritual growth. He suggested that people outgrew their protective shells and discarded them as they become no longer necessary; ‘One’s mind, once stretched by a new idea, never regains its original dimension’. It is as a metaphor for growth that the nautilus is used as a symbol for the New Zealand Curriculum.’

Sensitive teachers would easily be able to evoke poetic writing and descriptions of shells from their students after an opportunity to study then closely. Older students could ‘dig’ deeper into the meaning of Wendell Holmes’s poem he called ‘The Chambered Nautilus’

Holmes imagined the nautilus shell as a symbol of evolution; that in order to begin a new stage of in our growth, we have to think ‘outside the box’. This ‘outside the box thinking’ may be the real challenge for schools and teachers in implementing the NZF as we are always in danger of claiming that the chamber we are now in is the ultimate one. The spiral shape (itself a symbol of unfolding energy) suggests the shell can grow forever and that there is no final chamber; the nautilus must keep on building new chambers as long as it lives. It cannot go back to a previous one as it would no longer fit. It has no choice but to grow and move on. It is a symbol for renewal.

A shell study could start by having students complete close observation drawings of real shells, or from photos. Such an activity will spark student curiosity and will provide their minds time to think of ideas about shells and, also, to generate questions and queries they might have. Such an activity is intrinsically rewarding providing immediate feedback; the more you look, the more you see, the more you see the more interesting the object will become.

By encouraging looking carefully students will notice more nuanced details and some will become aware of interesting poetic thoughts and metaphors to share. Such close observational reflection is sound education practice and helps students construct their own knowledge.

From such ‘first’ questions and ‘prior ideas’ students could undertake individual or group research.

From observational drawing students could be encouraged to develop creative interpretations or designs based on shell ideas.

Teachers could introduce ideas from science, mathematics and literature to enrich their students' perceptions. Secondary teachers could share their individual subject knowledge to develop an integrated cross curricula study.

Such a study, not only provides an opportunity for students to make used of a range of frameworks (NZF Learning Areas, or ‘multiple intelligences’) to explore any object, but it also provides the inspiration to for students to express their interpretations using a variety of creative media.

The nautilus metaphor was a good choice.
Posted by Bruce Hammonds at 1:08 pm

It seems to me that too many primary teachers 'plan' for their students extensive integrated units and then achieve little in depth undestandinmg. Your blog shows how a simple study can achieve a depth of thought that would 'stretch' students minds.

Secondary schools , in contrast, are trapped in a few watertight compartments, each of considerable depth, which close students minds to integrated thinking.

I think you are right. All too often 'teacher's' units result in students completing teacher designed tasks not studying, in depth, issues felt important to them. When you read the results of, so called student research, the students real 'voice' is missing. It often seems activity for activities sake.

Secondary schools have a great opportunity to develop exciting programmes based on student concerns by making use of their combined subject knowledge to develop a depth of individual understnding.