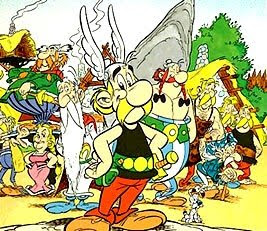 Asterix, a Gosginny and Udeno cartoon about a defiant tribe of Gauls resisting the might of the Roman Empire.

In recent book, 'Nature Via Nurture' by Matt Ridley, both, he writes, contribute to whoever we are to become; the emphasis is on 'nature via nurture' . The book is a great read but I was attracted by his thoughts about how the environment young people grow up in effects the development of each persons unique talents.

Children do not see themselves as apprentice adults, he writes, but rather they try to be as good as they can be whatever their age. What they want to do is to find a niche within their group of peers, conforming to expectations on one hand, while at the same time differentiating themselves on the other. Developing this balance is a continuing universal challenge for us all.

Anthropologists believe that ancestral human being reared their young in groups; their natural habitat being a mixed age creche. This is believed is a more natural habit than the more recent and much admired isolated nuclear family.

In early, or pre- industrial, cultures young children found themselves searching for appropriate roles in relation to their peers. Peer pressure ought not to be seen as a negative influence, as it often is, as it has a major effect on student behaviour and can be utilized positively. This search for identity amongst ones peers still underpins student behaviour in modern classrooms and, as such, it is one that we ,as teachers, ought to be more aware of.

Examining any young group, in the past, out of school, in families, or in the classroom, and you will see, says Ridley, 'a tough, a wit, a brain, a leader, a beauty'.'Each child soon realizes what he or she is good at and what he or she is bad at- compared with the others in the group. He then trains for for that role and not for others, acting in character, developing still further the talent he has and neglecting the talent he lacks. The tough get tougher, the wit gets funnier, and so on. By specialising in the role he has chosen, he becomes what he is good at.'

An awareness of this role differentiation occurs about the age of eight - before this age all young children believe they are artists, after eight certain 'artistic' individuals are nominated by their peers.

It would seem important, if this is the case, that children are given every opportunity to develop, amplify, or discover what talents they might be good at and to encourage more positive roles, if a learning disposition is to be nurtured. Small differences can be magnified by habit and acceptance. The teacher's role ought to be to develop a positive and challenging learning environment that continually widens the students' horizons, building on their innate propensities.

Ridley calls this the Asterisk theory of human personality. In the well known cartoon, about a Gaul village resisting the Roman Empire, there is a very neatly drawn set of roles.

The village comprises of a strong man ( Obelix), a chief ( Vitalstatisitix), a druid ( Gestafix), a bard ( Cacophenix), a blacksmith ( Fulliautomix), a fishmonger( Unhygenix) and a man with bright ideas ( Asterix). The harmony of the vilage owees something to the fact that each man respects the others talents - with the exception of Cacophonix, the bard whose songs are universally dreaded.

No human being is rich in all talents in the same way but all have potential talents to develop as has been explored by Howard Gardner in his theory of multiple intelligences.

All viable communities, including schools, and individual classrooms, thrive because of the respect of each others talents and a willingness to share and help each other; this trust and cooperation is to each others mutual benefit.

The trouble , according to Ridley, is that modern industrial society people are assigned jobs without respect for talent. Not surprising, since in school developed in an industrial era, one size had to fit all.

'Personalised learning' is an antidote to such a wasteful but efficient mass system.

We need, as in early human cultures, to take advantage of each persons natural talent as and reinforce nature with nurture ( by providing opportunity and focused practice), so each persons innate talent becomes a self fulfilling prophecy.

Given the right conditions we all get good at what we get good at- and avoid what we don't do so well. Children, when they experience success, in whatever area, have their appetite sharpened for that thing.

Any ability, from making music to playing golf, is a mixture of nature and nurture. Often all that is need is a slight aptitude and an appetite for endless practice. The skill of a mentor, or coach, makes a big difference to gaining success. Such success gains the respect of others - more so if the expertise is utilised for the common good .

Lessons in all this for creative schools and teachers?. Our society is full of, 'round pegs in square holes'.
Posted by Bruce Hammonds at 12:54 pm

The future is all about developing every learners talents - so far we haven't done such a great job! Maybe the problem lies at the top - a talent free zone full of academics who seem to enjoy stating the obvious ( 'Best Evidence Research') and patting themselves on the back?

Sorry should have said ruled by highly paid 'Academixs' who spout off but keep safely closeted in their ivory towers, well away from the action!