The artisty of the teacher 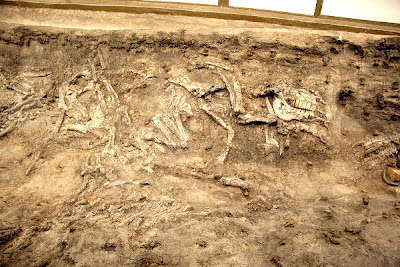 The grave of a Viking Chief buried with his horse and other valuables. Imagine the scene at the time!

It is not that common to see students writing that really deeply expresses their emotions and thoughts about events that may have happened in distant time or place.

All too often what is seen is matter of fact information written out without any real depth of thought.

Many years ago I was impressed with a book on children's language written by Harold and Connie Rosen, 'The Language of Primary School Children'. Such books are not so common these days which is a shame as there is a real need for teachers to help their students think deeply and to express their 'voice' with sincerity and feeling. When emotion and sensory impressions are are involved in any learning it will 'stick' forever. This is how the brain works.

Teacher artistry and sensitivity is required to enter into dialogue with the individual learners to help them develop in-depth thought. Lack of depth and understanding is all too commonly seen today in students' observational or scientific writing as well.

In the example below students have researched deeply and have been exposed to a range of resources about Viking life. An image that caught their attention, imagination, or sense of horror, was the thought of the killing the dead chief's horse.

The teacher appreciating the power involved in such a situation asked the students to write their thought about this event about this distant culture. The teacher was well aware of the the power of the theme of death and dying - a theme all too often ignored by schooling.

The thing to note is how the teacher helped the student 'forge through dialogue and revision' a powerful piece of writing.

The child's first attempt resulted in:

'The chieftain's two saddle horse and hound is killed by a dagger then put in with the chieftain.'

The child, after discussion, was then asked to imagine what it would be like to kill a horse.

The first revision resulted in the following:

'The chieftains saddle horse was killed and his dogs are held by a Viking then one of the other Viking gets the dagger and puts it one by one into the chieftain's animals, then a group of very strong vikings take over by lifting the animals and carrying them to the boat, then they are put into the front part of the ship and they remain in there.'

The teacher, after further discussion, asked what the vikings looked like, and to think about how big horses are, and the sounds they might have heard at the scene if they were there.

'The Viking did not lift the horse easily and clenched their teeth together half toppling over. It strained them but they were used to it. When the dagger killed the animals they lept and screamed loudly with pain and then the sound went suddenly and it died with its last cry.'


The student, now totally involved in the situation, made a final revision and called the piece 'the Horse Sacrifice'.

'It lay there dead, its skin pierced. Blood stained the clay, its legs rested, its eyes closed.It moved not once, its tail layed on its mighty legs. It was good horse, it ran fast, it obeyed every word.Its mighty legs ran swiftly on the on the soft earth. Then a group of very strong vikings lifted the horse to the ship and put it in the front part of the ship. A day of sadness had come, his great life was extinguished.'

Not bad for a nine year old.

As one teacher I used to work with used to say, 'It is about defining and refining'. Another believed strongly in, 'tapping into felt experiences'.

By slowing the pace of work and by encouraging reflective thought the learner has time to develop new associations and by means of this process to move away from cliche thoughts. And as a bonus the student gained a real insight into the creative process.

I once had young student who wrote, after half an hour, 'In the weekend my dad and I killed two pigs'. After reading the viking story above I knew my teaching task had just begun.

The power of teacher dialogue, to explore and deepen the thoughts of students, applies to all areas of learning. It only works however if teacher really value the unique 'voice' of their students. This is the key to the developing true personalised learning
Posted by Bruce Hammonds at 11:18 am

You are so right. Student research writing is very weak - no thanks, in some ways, to the use of the internet. Cutting and pasting rules. In an 'information age' this is is a concern - students shoud be taught to dig deeply and question things.

A great example of what is missing in our current predermined criteria and teaching intention approach. We are missing out on tapping the ideosyncratic creative 'voice' of our students.