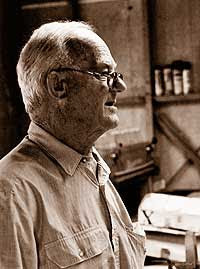 Elwyn Richardson - pioneer New Zealand creative teacher 1950-60s. Forget the research and current conformist 'best practice', go back and see what teachers like Elwyn did that we have forgotten about.

According to Kelvin Smythe, and I agree with him, creative 'teaching in its fundamentals has hardly changed, nor is it likely to change.' Kelvin has written widely about Elwyn Richardson, a pioneer New Zealand teacher from the 1950/60s on his site and, for those curious, it is well worth reading what he has to say.

While schools rush to get on board the 'new' New Zealand Curriculum Kelvin offers a critical and informed voice. Along with people like myself Kelvin believes strongly in the creativity of classroom teachers - creativity he feels that has been put at risk by the obsessive assessment requirements, and the demands of impossible standardized curriculums, imposed during the 90s. Ironically the Ministry is now 'rescuing' us from such demands( imposed by themselves) with their 'new' curriculum!

The four characteristics, according to Kelvin, of Elwyn's teaching were his:

Attentiveness and sensitivity to the responses of children.

His demand for children to be rigorous in their observations, thinking, and expression.

The way he linked thinking with imagination.

And his determination to work things out for himself.

I would add a fifth;

The immediate environment was seen as an important resource to explore leading into both artistic expression and scientific study.

Elwyn' curriculum 'emerged' out of a mix of student and environmental interests but the key to it was for students to be encouraged to express their 'voice' and create works of outstanding quality and diversity.

Elwyn, a biologist by training, saw his students as teaching him as much as he taught them.

Kelvin writes, as society becomes more technocratic, pressured, and impersonal, and less beguiling- there will be greater demand for teaching about creativity and expression.

As we leave the Industrial Age and enter, what some call 'The Age of Creativity', or the 'Second Renaissance, it will be important to make certain all all students have their personal skills and talents developed because these are the very things that will ensure they will be able to thrive in the future.

Kelvin makes the point that we do not have to go to America's Howard Gardner, and the like to seek inspiration so as to develop programmes that feature creative expression we have out own heritage and icons. Personally Howard Gardner is one American educator I really like as he challenges the traditional one dimensional academic approach to learning but I take Kelvin's point. All too often when visiting New Zealand classrooms you see evidence of all sorts of thinking processes but all too often little real quality work to show for it. Process and product are intertwined but sometimes you get the impression all students need is process - knowledge can be gained as required.

Elwyn's approach, when it was finally accepted by authorities as 'best practice', influenced a great many teachers throughout New Zealand and worldwide.

There is, writes Kelvin, a universality about Elwyn's creative approach and it does not preclude the use of information technology not available at the time to Elwyn. Elwyn was a great fan of the printing press as a means to share his students art , research ad language work.

We need to be careful with the current obsession with imposed 'best practice' and be more concerned about creating our own ever changing 'best practices'. By all means be 'informed' by research but not 'led'; we need to use professional judgement as to how value it is in your circumstances - research is never as objective as it claims to be and you ought to know your classroom best! As with Elwyn, we need to work things out for ourselves!

I know, from my own experience visiting school, such teachers still exist. Perhaps with 'new' curriculum giving 'permission' such teachers now have the opportunity to expand their creativity if they have the courage to take it.

What is really required is courageous and creative school leadership to create the conditions for both staff and students to develop their talents, gifts and passions.

Better still would be for groups of school to work together sharing the expertise of their own teachers.

If this were to be achieved then the work of pioneer teachers, such as Elwyn Richardson, would live on.
Posted by Bruce Hammonds at 12:55 pm

I worked with Kelvin many years back. I wonder if he would remember me.

I can' seem to find a web presence for is current work apart from his web site.

Shame he is not blogging.

I am sure he would Allanah.

Kelvin has regular postings on his website.Link on my blog.

It is great to be able to tap into his critical insight. Teachers need to be critical if they are to cope with all the imposed nonsense. See my blog about Lester Flockton.

Perhaps the most important aspect of "facilitated learning" is the parents/family support for the education process and the ability of the teacher to become significant to the the kid concerned. This significance is the aspect of teaching, and care for that matter! that fosters the kids natural resilience. We all know that to learn how to learn requires the establisnhment of skills that in the first instance may seem boring to a student, it is the aspect of significant connection to the teacher that enables the teacher to become a quality person in that students life. This, in turn requires the student to carry out work that initially they may see as dumb or boring until we see the end result, which is the ability to facilitate postive and creative learning owned by the student themselves!Initially they do this work to please the teacher and receive praise.Then they start to do extra work to please themselves! In as far as the NZ education system is concerned the long tail of underachievers (Mostly Maori and now Polynesian)points to a lack of significant connection especially in the secoundary system.

Bruce - I am really enjoying reading about the creative teachers and pioneers from the past. Thanks - JH
http://thecompasspoint.blogspot.com/

Thanks JH. What we are missing in our schools is an emphasis on the aesthetic and personal- based on the learners natural desire to ask questions, seek meanings and express ideas. Maybe the new curriculum will see a return to such humanistic 'personalised' teaching?

Anon.Thank you for your comments. I agree with much of what you say ( connection, support and relationships beween home and school and that the the techer needs to be seen as significnt by the students) but I don't agree with teaching skills first ( 'which kids see as dumb or boring'). Skills ought to be learnt during the process, as and when necessary, but they must never be boring or dumb. But I agree skills are important to achieve quality results. Without skills students learning power is lost