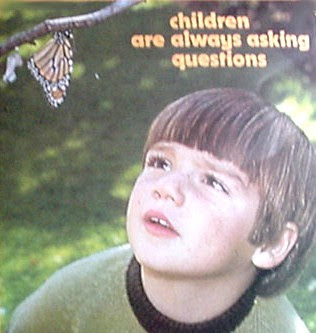 If children are aways asking questions then ought not our classrooms help them in their search for answers?


I recently came across an extract from an article called 'Children are Scientists' written in 1947 by Herbert Zim.

That we haven't yet created schools based on assisting students research their own questions and concerns just goes to show how much 'our' curriculums, what 'we' think is important for them to learn, has ignored the source of real motivation for students to learn.

No wonder many students become 'disengaged' - they were never 'engaged' in the first place. And to make it worse imposed curriculums now reach down to the very young. The situation is not helped by the pressure felt by parents to make certain their chiden succeed. There is no time for children to explore to satisfy their potentially ever expanding curiosity.

'That children are scientists is a truth worth repeating with emphasis. That they are also artists, musicians, and social beings we know. But young children particularly are more scientists than they are anything else.

The child starts to become a scientist with those basic reactions that first make him ( and her) aware of cause and effect.

To go further, all normal children possess curiosity about their environment, a quality that is essentially scientific. Children persistent questions,although sometimes motivated by a desire for security, are an outlet for curiosity which expresses itself in activity patterns as well as verbal...

Young children never hesitate to offer an explanation of even complicated phenomena.They may be completely in error but they develop a surprising logic in the hypothesis they set forth...It has been repeatedly suggested that scientists have made their great creative progress because some have been able to preserve and use these very qualities that we see so clearly in the young child.'

Just imagine a class that really values students questions and utilizes them to create an emerging, ever evolving, curriculum. Imagine teachers dedicated to helping their students research answers to their questions appropriate to their developmental level. Such a teacher would ever be on the alert to tap into students' natural curiosity,environmental events, as well as providing potentially stimulating experiences that might capture students' attention.

In such a classroom such creative teachers ( because teaching is in essence a creative act)would interact to help students 'dig deeply' into things that concern them. Such teachers would challenge their students to consider other possibilities always leaving the final choice to the students themselves. A wise teacher knows that students will change their minds when it makes sense to them.

In such classrooms students would be seen as 'scientists, artists, poets, and social beings'. They would see their students, as it is suggested in the 'new' New Zealand Curriculum, as 'active seekers, users and creators of their own knowledge'.

Maybe the time has come for teachers to throw away their curriculums and work along side the students to develop learning around what captures the students curiosity.

Too much teaching simply goes against the grain of the way students naturally learn. It would be easier to go with the flow.
Posted by Bruce Hammonds at 12:07 pm

Have you ever known of classes based on students' curiosity and creativity such as you have imagined?

Certainly not in the last couple of decades since the introduction of standardized curriculums and heavy assessment requirements. In earlier 'child centred' days there were lots of teachers who developed 'emergent' curriculums based on students questions and interests.

I agree with every sentiment expressed in your post except the one that says, "children are scientists".

They are no more scientists than they are lawyers or plumbers or playwrights or gymnasts. If you want to make a comparison and use the word 'scientist' as a metaphor then this is acceptable if it is defined as such.

In western society today the word 'scientist' is being used and abused and I would say that this is certainly a misuse of the word.

We have Māori Science and we have Christian Science and there is about as much Science in either of those disciplines as there is in the inferred skill of the children you are calling scientists.

I think we are in danger of putting far too much responsibility on the shoulders of a child to live up to these aspirations.

There is a difference, however, between what you refer to in the teacher and seeing the potential of the child to be a plumber or a lawyer or a medical doctor or a scientist. The fine teacher has faith in the learner that they will fulfil their potential whatever they aspire to become.

The trouble with saying that children are scientists, is that the teacher who believes this starts believing that what children do is what Science is all about. It is not.

Aspiring scientists who are learners have to realise the significance of what it is that they observe. It doesn't become Science just because it is observed.

Aspiring scientists have to question the validity of their observations and devise other ways to test that those are valid.

Aspiring scientists have to be able to make prediction based on their models and explanations and then make new observations form experiments to test their predictions.

While the child is indeed a wonderful being, the true teacher sees the potential in the child to become the plumber, the lawyer, the pianist, the doctor or the scientist.

Thanks for your thoughtful reply.I am happy to see young chidren as 'scientists', or young pro scientists, that is if science is defined as asking questions and searching for best answers at the time. And artists, musicians, doctors, dancers etc , depending on what they are doing. I didnt mean to infer that they were adult scientists. It was Jerome Bruner who said young children were like scientists working at the edge of their competency. Picasso said young children were artists and artists ( himself included) had to see as through the eyes of a child. Don't suppose it all really matters as long as we value the 'voice' of the students.

What an interesting blog and post! Recently I read about a research group here in the Netherlands who do research in order to learn more about the relation between playing and learning of children. They found that children learn by designing small experiments. Their learning can be enhanced by targeted interventions that stimulate this examining behaviour. In the interview I read with one of the researchers there is made reference to a book that is related to this: 'The Scientist in the Crib: Minds, Brains, And How Children Learn' by Alison Gopnik , Andrew N. Meltzoff, and Patricia K. Kuhl. It might be of interest to you as well.
Kind regards,
Suzanne

Thank you for your comment Suzanne.Great to get some feedback from the otherside of the world! I am going to track down the book you mentioned, it sounds really interesting. I aslo enjoyed exploring your blog as well.