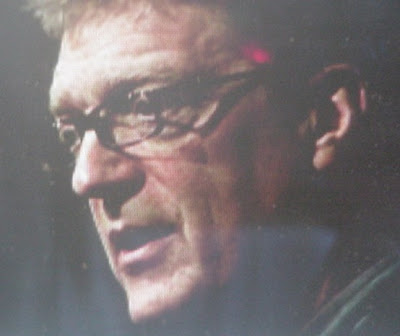 If you have never heard Sir Ken Robinson's short video check him out on google. Or visit his site Or visit previous blogs.

I came across an interview with creativity expert Sir Ken Robinson and couldn't resist listening to it as his 'voice' represents what education could be if it could escape from its 19th century straight jacket. His writings and presentations are all about the need to move us from an academic educational system, created to 'serve' the now defunct industrial revolution, to an interdisciplinary structure more suited to today's globally networked knowledge workers.

Considering the challenges we face it would seem a sensible idea.

Sir Ken big concern is that education ought to be all about developing the whole child's individual natural abilities, talents and uniqueness. He believes it does not do this at present and that, in many cases, 'it divorces people from their natural talent'.

He believes that creativity has been leached from the educational process. Education , he says, ought to be about enabling people to have life which has meaning and purpose for each student and also to allow them to contribute to their communities.

Most countries provides a very narrow form of education and it's getting narrower. This, he says, is not an argument against literacy maths, or science . These are very important even if, he says, schools do not teach them 'courageously', but the current emphasis pushes out other equally important disciplines.

The first thing Sir Ken would want to see is a more broadly based curriculum. This would include maths and technology, and so, on but you would do them in different ways. He would like more emphasis on project work, on discovery, but he would also like more art, music, dance and theatre. 'You'd be doing', he continues, 'interdisciplinary sessions, where you would be learning maths through theatre; you would be using maths as a way of enhancing learning and dance for example. So it would be a much more dynamic curriculum'.

'Secondly, it would be much more tailored, as you are getting older, to your particular interests, because people have very different talents and abilities.' In the traditional school setting many people are weaned away from the very talents that excite them.'I am sure', he says, people have had the experience of being pushed away from doing certain things like art or music because of a belief that these things aren't very useful for getting a job'. He makes the point that art today, for example, is very important with the current emphasis on industrial design, product innovation and the wide range of jobs in the creative industries.

Some things, he says, now taken for granted need to be challenged for example dividing the curriculum up and separating students by age, as this is often where the problem lies. He talks about students in lower grades who can outperform people several grades ahead and that he would like to see much more inter age learning. And he would like to see more adults involved in learning.


The problem education faces stems from systems invented in the 18th and 19th centuries to meet the needs of an industrial economy and, in many ways, were based on principles of industrialisation. They are all about a linear form of planning like a production line. It is, he continues, 'about conformity, about educating people in batches'. These intellectually impoverished schools, he believes, 'need to be revitalized'.

That schools ought to reflect today's personalised interconnected knowledge economy ought to be obvious to anyone involved in education. It is the schools that are the slow learners!

Sir Ken reflects that students beginning primary/elementary schooling today would be retiring about 2070 and that he doesn't know anybody who has the faintest idea of what the world will be like in 2010 let alone 2070. He compares this to when he was growing up in the 1950s and 60s when there was a reasonable expectation of what your working life might be like. About 80% of the work force were in manual work, a minority doing office work and a few eccentric people would go off and do creative work. And it was a reasonable expectation that if you got a job you'd have it as long as you needed it.

Things have dramatically changed but school remain the same. Good if only it was 1960!

There is no going back to basis unless, Sir Ken says, it means a more accurate sense of human capacity based on developing the talents of all learners. It is entirely possible to do this, he says, 'the best way to to prepare our kids for the future is to have them firing on all cylinders.To really know what they're good at and be confident they can do that'.

The two things that will help anyone develop their creative capacity, Sir Ken believes, are 'habits and habitats'.

By habits he means the routines we follow during the course of our daily lives; the more we do the same things, the more we think the same way. One way to develop creativity is do things differently to stimulate your imagination; to do things you wouldn't normally do. We need to open our minds to new possibilities and new experiences and do things we haven't done before because often being creative is finding a new 'medium'. When people are in their 'element' they love the things they do. Discovering each learners element has to be a priority for schools.

The second is our habitats. The environment we live and work in, the way we configure our buiding, effects who we relate to and in turn has a huge effect on how we think and how well we think. Redesigning our physical spaces redesigns, in turn, our physical reationships and can have a huge liberating effect on your whole creativity, he says.

It is a shame that schools, secondary schools in particular, have such fixed routines that ensure their students receive an outdated fragmented view of learning and in the process that deaden the human spirit.

Unless schools can break such counter productive habits and habitats they will remain educating their students for the wrong century - as we enter a new creative era this would be as disastrous as ignoring global warming, Sir Ken believes.

Currently most governments , according to to Sir Ken,' seem recklessly bent on making the situation worse with their imposed national reform programmes'. What governments need to do,he believes, is to create the conditions to allow school to develop the creative capacities of all their learners rather than enshrining literacy and numeracy at the neglect of other equally important things.

All we need is are governments that realize we need to redesign our schools to equip all students for the challenges of the 21stc.

Perhaps this is asking too much?
Posted by Bruce Hammonds at 9:17 am

It's part to do with control. The control is imposed as it is seen as the way to do things in the way that things should be done (whatever that is).

The other part is to do with saving money which is why elearning has been put on the agenda of most education authorities.

Of course, both these components are propaged through ignorance.

Control of what? They don't know.

I have seen the video and loved it!
I appreciated what he had to say and will visit his website. Thanks.

Great to hear from you both. Sir Ken's website didn't really impress me at first but I got used to it. You can view his videos there - but overall it is a bit light on content.

As you say Middle Earth national systems are about control and elearning only works when the system is transformed.Otherwise it is all P.R.O. and 'bling'.

Bruce, you have made my day!

John Cleese has a good video too - http://blog.core-ed.net/greg/2009/01/cleese-on-creativity-or-leadership.html

Thanks for the lead to John Cleese's vid! I have never seen that vid before, but watching it gave me déjà vu, for my comment above is exactly what the latter part of Cleese's vid is about.

Your quote from the vid is implicit!

Thanks Greg/Middle Earth for your your link to John Cleese. I enjoyed it as well - very droll.I note he was holding Guy Claxton's book in his hand -'Tortoise Brain and Hare Mind'!

Thanks for visiting Karen

Great post! One of our contributors at the TI-Teachers Lounge recently wrote a post that touches on the habits subject, in relation to standardized testing. She believes that recipes for success are being developed for these tests, which can hinder higher level thinking and creativity in the classroom. Like Mr. Robinson, she also believes incorporating technology in the classroom can engage students and encourage them to think critically and creatively. You can check out some of her thoughts at http://timath.com/blog/?p=442