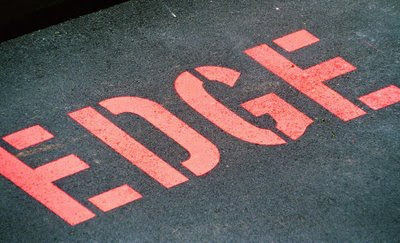 I recently read an American article outlining the transformation of an Australian middle school and thought the ideas worth sharing. The Australian school was selected as one being successful in a very difficult socio-economic situation. To me it provides insight into how education could evolve if only it could escape the conservatism academic pull of the past. The school motto ( vision) is 'Living on the Edge'. The school believes the 'edge is only the beginning' and that everybody involved needs to aim to be 'the best we can be'.


Education is difficult in disadvantaged situations where it is pretty obvious that the old ways are not working so it was great to read about a school that seems to be beating the odds. The approaches they have developed provide guidance for all schools but particularly middle and secondary schools.

And it is not that the ideas are even claimed to be new - the school involved just had both the leadership and the courage to put them into practice. Their approach is in opposition to the market driven imposed reforms of the past decades that have enhanced the advantages of the already privileged and failed to solve the growing problem of disengaged and alienated students.

The school concerned has 'reinvented' teaching and in the process transformed the educational opportunities for all their students.

It is the belief of the school involved that student disengagement cannot simply be blamed on out of school disadvantages ( deficit theory) and that the school environment has has strong effect on children's participation and sense of belonging. The school concerned decided not to focus on the 'relentless scrutiny of failure' and to go beyond 'blame the victim' approaches which lead to cycles of hopelessness and despair and, instead, accentuate 'evidence of promise', things going well, leading towards hope and optimism

A recent OECD Report (2003) states that the worldwide disaffection from school is not limited to a small minority (about 15%/20%) and that virtually all schools have problems associated with disaffection.

The American article suggests that all countries ought to be encouraging and studying successful schools that are experimenting with ways of reinventing themselves. This is certainly preferable to trying to solve the problem with such failing simplistic strategies as imposing National Standards.

The school involved, as stated, was situated in an area of high poverty, low income and unemployment with all the associated problems. Teachers in the school were 'living on the edge' as they attempted to ameliorate the the resulting distressing effects.Teachers in similar situations will know the feeling.

Now back to the school.

Visitors entering are all greeted by a personalised warm welcome - an introduction to the importance of relationships in the school.

In the 6-9 group 88 students and 4 adults make up the learning team. Each day starts with 'talking circle' time where students discuss their personal programmes( called 'self initiated learning').'Talking circles' start all sitting on the floor with a student chairperson and follow agreed rules. Attendance is taken and notes made of decisions. This is an attempt to involve students in controlling their own learning and a way to model respectful behaviour.

Learning plan are negotiated with learners.For example a group of boys want to explore their interest in fishing.To go ahead they have to draw up a concept map to outline learning possibilities, the resources they need, and where they hope to get their information from. Students are also expected to say where their study fits into the official curriculum of which they have a copy. Teachers help them define areas of study and identify important aspects from the various subject areas. Some of the areas identified include: fish anatomy and physiology, feeding habits, habitats, fishing grounds and predators. They also plan fish dissection which will involve acquiring necessary books and dissection equipment.

They then decide who is to do what and when and plan for their excursion which needs to be justified ( the school, bus only takes 8 students). The boys are used to all this planing and and move into action immediately.

This plan , although it starts with students interest, covers in depth the learning expected for students of this age.

What is going on is radically different than most schools. Missing is any notion of a conventional classroom and the teachers have almost become invisible. The adults in this environment are seen as resource people. Walls and corridors are missing and instead spaces have been created furnished with tables chairs and carpets. The environment exhibit students competed work, and colourful posters talk up important messages for students about rigor, expectations, possibilities and commitment to learning - words like 'courage', , 'teamwork', 'commitment' and 'challenge' are to be seen including the school motto , 'Live to the Edge and be the Best You Can'.


These are the sentiments to be found in the schools guiding principles and values.

In the year 6-9 learning area there is a large whiteboard with 30-40names on it indicting where students not present are were currently working, another indication of trust.

The principal has been the key to the development of the school beliefs but it has been a long journey. It was been important to get the students to admit when they don't know something so teachers can help them tailor a learning plan. Respectful relationships were crucial and the year starts with student and teacher team building activities where there is no formal teaching. At this bonding time students are asked, 'What enhances your learning and what distracts from it?' The major concern identified was lack of power. Also uncovered were issues they wanted to learn more about.

The principal felt she had two choices one to change things slowly the other total immersion in new ideas. The latter was course the school took. Three team were set up , a student team, a staff team, and a community team, to discuss how to enhance learning. One of the first things the school did was to audit the out of school decision students were already making; that they were applying 'key competencies' to achieve. The school also asked 'How many authentic decisions do students make in school?' This uncovered students were making important decisions out of school but not in school itself. If the core business of the school was to help students learn this had to be addressed. The same process was undertaken with the Management Committee. All this assisted the school community and students to think better of themselves.

The principal, at the request of staff, modeled student initiated learning by negotiating a study with students in classes to doubting teachers. Teachers were then encouraged to negotiate their own studies assisting developing individual learning plans with their students. Gradually the teachers took the ideas on board and eventually everybody began to dabble with it.


The key was to extend student interests along the lines of the fishing example mentioned earlier. Students also had to appreciate that they had to learn to cover official content expectations which were shared with them. Any special assistance students needed to achieve their plans were provided in small groups rather than to the whole class and to achieve this teachers have to interact with students to monitor and assist students. Teachers now enjoy working with students achieve their exciting projects. An integrated programme evolved as students interests crossed traditional subject barriers.

Along with relationship and empowering students raising expectation was vitally important as many of the students were accustomed to failing. Students attitudes changed dramatically as they began to see their learning as relevant to them, and they began to want to come to school.The students also appreciated the new role of their teachers as learning facilitators, teaching them how to learn, how to research, how to present their findings, rather than keeping them in order. Students dislike the lack of individuality of 'normal ' high schools and appreciate moves toward personalising the curriculum and the emphasis on achievement. the biggest problem the students identify is that students don't fail school , traditional schooling fails students; in traditional schools teachers are right and students wrong.

After five years all in the school are success orientated and innovation and creativity are highly valued by students teachers and the community; a sense of pride has evolved in this once failing school. The starting point was challenging the low expectations the students had of themselves which in turn was reinforced by their teachers and parents. Changing the entrenched teacher directed, content orientated view about teaching, was a real issue. Adults now 'steer' student learning acting as informed and supportive guides enlarging students areas of interests and relating them to the curriculum.

The process is far from complete but there has been a paradigm shift as student ownership of their own learning has become the norm. The locus of control in the learner, and the emphasis on relationships, has dramatically effected behaviour as students now see the consequences of not learning. Student voice, power sharing, decision making, learning how to negotiate learning, how to making best use of time,and the need to achieve their best work.

There is now a passion for learning that pervades the whole community. This is a school that is facing up to challenges that seem impossible, or simply ignored, by most schools. Underpinning this school is the moral courage needed to make a difference

All this in a school that was seen as underachieving!

If we are to avoid the 'race against catastrophe' and face up to the alarming evidence of disengagement and alienation of students, of schools not working for a growing number of their pupils, then we need to search and share the ideas of 'grassroots' schools that are making a difference.

We need schools that treat students as real people who need to feel a belonging to their schools and who feel that their interests and talents are recognised; schools that fire up the imagination of all their students.

Until this happens many students will make the decision not to go along with what is being offered.

The school referred to still has a long way to go and there is still a high level of tentativeness as they explore their way into the future but at least parents, students, and teachers are working together. With this in mind they have a good deal of assurance about where they are going as they jointly construct their own pathway into the future based on constantly reflecting on their experience of trying something.

It all began with a leap of faith.
Posted by Bruce Hammonds at 3:46 pm

It shows it can be done - but not by 'tinkering'. The key was the courageous leadership to make a total commitmemt to 'self initiated learning' and to learn through doing and reflection. Good stuff. Any Kiwi schools doing it?

There are schools trying innovative programmes but few , if any, really having a go at personalised learning as illustrated in the blog. Not even primary schools -except for personalised writing. I could be wrong? It is the way of the future -after all whose education is it?

The 'Aussie' school you write about has moved well away from any secondary school( or primary come to think of it) that I know!

All too simple for those who run our schools to comprehend I guess. Schools are not really learning organisations are they? Or, if they are, they are slow learners!

It was a report on a very innovative school but quite within the scope of any middle school/lower secondary school that wanted to really help its disengaged students. I know of some schools ( usually new schools) that are moving in similar directions.