Quotes from Tom Peters on education. 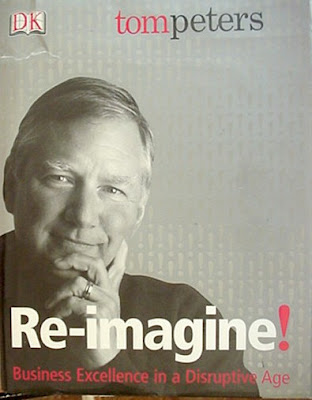 Tom Peter's book 'Re-Imagine' is well worth a read if you want to keep up with future trends. The following are few quotes to do with education that have caught Tom' attention. Tom thinks schools couldn't have been planned better to crush creativity than if they were planned to do so!

And Alvin Toffler writes 'Our education system is a second rate factory style organisation, pumping out obsolete information in obsolete ways.( Schools) are simply not connected to the future of the kids they're responsible for.'


'It is an inescapable reality that students learn at different rates in different ways.That creates the need for a schedule of sensitivity that not only teachers close to the particular student can devise - not some theory-driven, central office, computer-managed schedule.' writes educationalist Ted Sizer.

And Sizer says of secondary schools, ' We parade adolescents before snippets of time. Any one teacher will usually see more than 10 students and often more than a 100 a day. Such a system denies teachers the chance to know many students well, to learn how a particular student's mind works.

Howard Gardner writes, 'Students who receive honor grades in college level physics are frequently unable to solve basic problems encountered in a form slightly different from the the one in which they been formally instructed and tested.'

'Education , at best is ecstatic.At its best, its most unfettered, the moment of learning is a moment of delight.This essential and obvious truth is demonstrated for us every day by the baby and the preschool child...When joy is absent, the effectiveness of the learning process fails and fails until the human being is operating hesitantly, grudgingly, fearfully', writes George Leonard in his book 'Education and Ecstasy.

'During the first years of life, youngsters all over the world master a breathtaking array of competences wit little formal tutelage.' Howard Gardner.

George Polk writes in his book Montessori a Modern Approach, ' The goal of the child is to develop and he is intrinsically motivated with an intensity unequalled in all of creation.'....'He cannot stand still: he is impelled towards conquest...The child seeks no assistance in his work. He must accomplish it by himself...The essential thing is for the task to arouse such an interest that it engages the child's whole personality'.

And as Roger Schank in his book 'The Connoisseurs Guide to the Mind' writes, 'Actual content may not be the issue at all, since we are are really trying to impart the idea that one can deal with new areas of knowledge if one knows how to learn, how to find out about what is known, and how to abandon old ideas when they are worn out. This means teaching ways of developing good questions rather than memorizing known answers, an idea that traditional schools simply don't cotton on to at all, and that traditional education teaching methods are unprepared to handle.'

'I see it every day' writes Dennis Littky, ' kids who people have dismissed as' dumb in maths" or "uninterested in science" or " non readers" doing incredible things in those same exact areas because they were finally allowed to start something they were can already interested in.'

'Questions, questions, questions.It is all about questions...They disturb. They provoke.They exhilarate. They humiliate. They make you feel a little bit like you've at least temporarily lost your marbles. So much so that at times I'm positive that the ground is shaking and shifting under our feet. Welcome to Socrates Cafe', written by Christopher Perkins author of 'Socrates Cafe'.

The three most important letters: Why?

Isn't it time we began to question what is provided as schooling and stop blaming the students for their ability not to make sense of it all?
Posted by Bruce Hammonds at 2:48 pm

Sometimes it is important to listen to voices outside the walls of the school.

All too often those who work in schools are just too busy protecting their territory to make any real changes!!

You are right it is time to look hard at schools to see how they are personalising learning opportunities for all their students and not just the 'academic' ( where most teachers come from!)

I think youare right.Those in schools are only happy to 'tinker' with things. All too often they are trapped inside the structures they teach within. Most can't even see the cages. We need outsider views like Tom Peters to see alternatives or even to face up to reality.