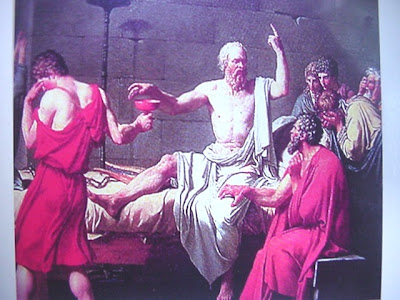 There have aways been individuals that have stood up against those who would take society in the wrong direction. Socrates is one such example. Due to the fact he questioned those in authority he was sentenced to death if he would not change his mind. Socrates would rather die than comply and, in those times, he was expected to kill himself, which he did. Today, in education, creative educationalists are in the same position although we need to fight rather than die. Kelvin Smythe is one individual who is apposing those in the Ministry who are corrupting the ideals of education . I am with him. Rather than taking digitalis he continues to write in opposition. So do I. Read his full article on his site.

With the distribution of the 2007 New Zealand Curriculum it looked as if we were at last leaving the technocratic nonsense of the previous decades. Then, just as it was looking good, the new government brings in the spectre of National Standards and, predictably, the Ministry and their contracted advisers all change their tune. Politics trumps integrity. We are now heading back to the past for solutions. As Kelvin writes, our system has been 'captured' and is in the process of being corrupted. Power has now been given to politicians, bureaucrats, and number bound academics, supported by the School Trustees Association and even some misguided principals acting like Judas sheep.

In all this the 'voice' of teachers and children are being ignored. And the fact that school failure is largely the result socio -economic causes is happily ignored by such people as John Hattie; schools are seen as the cause and the solution. And we wait to see Hattie's national assessment agenda unfold. The living example of Orwellian 'doublethink' is John Hattie . He appears to be both a critic and supporter of them. Hattie's concern, Kelvin writes, is not with national standards but that they are not his national standards.' Hattie, Kelvin continues, 'runs with the hares to hunt with the hounds'.

Standardisation is now the name of the game and ERO surveillance provides the fear necessary for schools to comply. Uniformity is to be valued over creativity. All professional development will come from officially approved sources - George Orwell's Big Brother is now in place. Forget the 'nanny state! The only 'advisory' help in the future will be approved and trained literacy and numeracy advisers armed with their 'cherry picked best practices' - reinforced of course by ERO with their checklists echoing government requirements. ERO will rule by capitalizing on principal insecurity. Kelvin suggests it needs to be renamed as the Uniformity Office, or the Imposition Office, or the No Alternative Office. Schools will be controlled by how how well they measure and account for a narrow slice of learning.It will be control first learning second. Schools can do whatever they like as long as it agrees with ERO; The ultimate Orwellian scenario. 'Schools' Kelvin says, 'have to believe in in what the education review office believes in, but also know that what the education review office believes in is mainly baloney'.

The National Standards will have devastating effect on the new curriculum but the Ministry seems to think they're compatible - after all their salaries are at stake. Kelvin , quoting George Orwell's '1984', writes that the Ministry is now involved in 'doublethink'. National Standards will 'stifle initiative, variety and creativity', writes Kelvin.

'Ministry best practice' Kelvin writes, 'means an imagination free teaching zone, skills means abilities stripped of the cognitive and the affective'. 'Competency based learning, performance based education, next step learning, mastery learning, criterion referenced education , feedback ( up, forward, sideways to the left now to the right)and benchmarking, to name few few - means have we gone crazy? and the qualitative academics of certainty are in control.' Hattie's 'visible learning' means only learning that can be measured, learning that can be divided up as exact next steps learning; learning that is like pieces of a jigsaw to be put together by the teacher. Learning that eschews the affective because it can't be measured; learning that is presented as efficient and modern'.

This is the jargon of scientific management thinking found wanting in the business world.The more valuable insights of creative teachers,past and present, is simply ignored. The best professional development is informal - teachers simply sharing good ideas. Kelvin writes that the source of big lies comes from the Orwellian 'academic quantitatives of certainty and their near fraudulent research ' which is replacing reality and teacher knowledge.

At a time when we ought to be acting creativity, valuing imagination, the divergent, and the exchanging of ideas, we are heading back to simplistic failed solutions of uniformity and bureaucratic control. Education is being corrupted. Space for alternative views are simply dismissed as mischievous by our Minister. George Orwell was right, if a bit early, in his prediction of state controlled thinking. In this big brother world ( the 'super nanny state') holistic eduction barely gets a look in.

It is not all bad news, writes Kelvin, there will always be people to challenge misguided official ideology - but they will not find it easy. Creative teachers, Kelvin writes, need to 'retain the idea that there is a better way. Hold on to the idea that you are only doing some things you do because you have to.'

The attitude of the minister and her bureaucrats, Kelvin writes is, 'derogatory, condescending, resentful and sometimes hostile. Teachers and principals are seen as obstructive to , and obstructive of, their evidence-based plans and certainties.' And of course their downplaying of socio economic issues impacting on schooling which 'lets the government off the hook' by making school 'scapegoats'.

Kelvin believes that things will get worse ( possibly caused by a combination of economic, social, moral, spiritual and environmental issues) as the full standards agenda unfolds. New ideas will be required and teachers and schools need to be ready.

As education is taken down the fragmented pathways devised by quantitative academics and control orientated bureaucrats, the narrow approach to learning that will result will become, Kelvin writes, 'increasingly unsatisfying for both teachers and students'.

Holistic creative and integrated education ideals will be needed. An education premised on developing the diverse talents of all students - a 'personalised' rather than a 'standardized' education. A education where the keeping alive the desire to learn will matter more than endlessly measuring and graphing literacy and numeracy achievements.

As the gap between the rich and the poor widens so will the school achievement gap. Poverty has a flow on effect on education. Current 'scientific management', academic 'expert' approaches, and the measurement based review office ( all left over from the failing industrial era) will eventually make things worse.

This is the corruption Kelvin writes about.

It is a corruption Kelvin continues, 'we are increasingly constrained from challenging or diverging from through fear, power disadvantage', or being too busy to notice. National standards are another diversion keeping teachers from facing the real challenges. Literacy and numeracy requirements have already distorted, or corrupted, and have become ends in themselves - the sole ways of measuring school success.

Those who still believe in creative education need to work away to keep the spirit of true education alive. Schools need to focus on making the best of the new curriculum. Most of all teachers need ,Kelvin concludes, to 'retain control of our professional lives'.
The challenge is to be ready, when the time is right, with well considered ideas.

Until then schools. 'need to do their best to slow down the decline by opposing the characteristics of 'scientific' management by exposing the myth of the academic expert, proposing alternative ways,and campaigning for a fairer society.

This blog should be compulsory reading for all NZ educationalists!

I'm with you Bruce and Kelvin and Mac!

Interestingly in yesterday's mail was a flyer inviting us to standards training. A list of advisers was included and their expertise included: Literacy, Numeracy, AtoL, Leading and Managing, ... you get the idea.

The NZC is a dead duck! No mention of teaching and learning apart from the evil twins of Literacy and Numeracy. In our school we call them English and Mathematics. A minor difference perhaps - a colleague told me recently that in some Maths PATs they did this year their kids bombed on anything that wasn't number - go figure!

Call literacy 'lanquage arts' - because that is what they are.

You are right Tom -it is standards 'training' ( indoctrination) not education.

Advisers 'trained' in Orwellian 'doublethink'! It is easy to see who is in control these days -and it isn't the teachers!

Big Brother is with us.

Great post, Bruce, as is Kelvin's article. Keep up the fight. I have been disturbed by the number of local colleagues who seem to be rolling over and working to get systems in place to report on standards. Can't they see the train coming down the track towards them?

For many it is simply going along with it to get along - the refuge of the conformist and the compromisers. Doing the wrong things well. And some are just too busy to see the train coming.

The trains left the station when Tomorrows Schools arrived! And for some it is all they know.

Courage is what we need - but is it in short supply?

My advice is do it badly ( enough to get by) and and get on with the important things. Like the new curriculum.

Yes, doing the absolute bare minimum is my goal. Fortunately the BOT agree with me, so that our focus remains on embedding inquiry learning in the school, in a 21st century context. As I pointed out to teachers the other day, we are nearly one-tenth of the way through this century, so the time to change is now! Sadly the politicians' desire to impose 19th century assessments on us just makes an extra hurdle to jump.

Doing enough to get by...

That will take a lot of courage and confidence. What if your school was performing below the NZ Standards?

ERO would toast you and you are in a supplementary review cycle!

From what I have read about overseas schools experience with testing( one step beyond the standards) is that the schools that have rich inquiry based programmes involving authentic reading , writing and maths are the ones that do the best. As far as I can see the standards are asking the same skills as an inquiry teacher wants. The trouble is that in some schools the inquiry aspect will be lost. That is if it was ever was in place.

Real inquiry based schools are rare beasts ! It is all about doing fewer things really well.

Allan Alach said...
This comment has been removed by a blog administrator.
11:54 am

Would it be possible to embed the standards into our school scheme and then choose enriching topics with which to learn about and develop skills and talents thereby meeting standards and staying true to creative teaching and inquiry learning?

I think you and Alan are both right - imbed them - but then if you were doing great inquiry work they would already be there!

Do what you are happy with but don't let them call the tune!

Correct standards means adopting the highest standards - Singapore textbooks are the best advancement in education we've seen in a century. Everything else is a big fat lie.

Singapore textbooks? What do you mean? Textbooks on innovation and creativity? Textbooks in a digital age?

What about homeschooling and online learning? Isn't that better?

I put together this blog about learning online http://alternative-learning.blogspot.com

Can people just opt out of the "standard" educational system there?

Good alternatives for the keen parents.