An inquiry based classroom 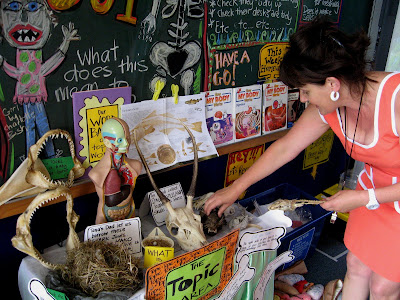 'How is your inquiry programme going?' seems to be a common question asked by principals these days.

Behind such a question seems the idea that inquiry is another programme to include in the school day along with literacy and numeracy.

Two things are wrong with this.

Firstly inquiry isn't a programme to simply be added to the daily programme rather it is a disposition ( their 'default' way of learning) that children are born with until it is 'flipped' by life experiences and by schooling.

Secondly the teachers I have admired over the years see inquiry as the basis for all learning - literacy and numeracy included. Today many teachers ( and schools) have allowed literacy and numeracy to all but 'gobble up' the entire school day. National Standards will further dissipate this missing inquiry dimension.


As the school year is drawing to a close I made the effort to make one last visit to a very creative teacher in local school to gather up a few photos.I almost arrived too late as the teacher, Deborah, was dismantling parts of her room. None the less I was able to take more photos in her room than many schools I have visited this year.

My visit reinforced three interrelated ideas that will hopefully become the alternative educational agenda for the new decade. An agenda to confront the 'big brother' top down National Standards demands of the Ministry of Education; a Ministry that has lost any educational integrity with its flip flops since the appointment of the new conservative government.

The first idea is to return to teachers the leadership role they deserve as idea developers ( not 'deliverers); the second is to to see the principals role as the creator of the conditions, the culture,and the agreed expectations for teachers to develop such ideas. The principal main role is to develop with all involved an agreed direction for the school - to define a vision and teaching beliefs for all to be accountable to.

This concept of 'parallel leadership', when combined with networking with other schools to share teacher strengths, makes the third idea. All combined the present a democratic educational agenda able to hold top down dictatorial mandates at bay.

For Deborah, the teacher I visited, there was no confusion over inquiry learning.It is just something she does. The room was full of interesting things for the class to 'inquire' into. She is a great example of what educationalist Jerome Bruner calls a teacher with the 'canny art of intellectual temptation'.

There were skeletons hanging around arising out of a study called 'Inside Out'. I just missed seeing a full size medical skeleton! Iam not sure where it came from but a body suit that children took turns to wear was popular - it had body parts velcroed for children to remove. This 'rich topic' had sparked (or 'generated') several lines of inquiry into a range of Learning Areas.I missed children exploring fish guts and the excitement of a fish eye, when cut into, squirting fluid across the room! This brings up the issue of planning. Inquiry learning is often going with the flow until study questions, or lines of inquiry, are defined. Predetermined planning and inquiry are contradictions - teacher artistry is required.

Bean plants climbed up the window wall with data being collected about rates of measurement and estimation of possible growth. Another maths display featured data about themselves. I was shown photos on the computer of the results of a study of mould that had 'emerged' and which developed into a major, if smelly, ( inquiry) study. The best inquiry classroom feature lots of 'emergent inquiries.

In the school foyer I saw clay animals that the children had created - the results of their 'inquiry' into clay . I was shown a 'wonder display' where children were encouraged to post things they were wondering about ( or 'inquiring') about . The wails were cover with art, language and science work - in particular an impressive spring display featuring - the centre piece being daffodils. There was also display based on parachute experiments following a school wide theme on transport( a helicopter had landed in the school grounds). I was also shown the results of studies arising out of a dead bird being brought to school -which encouraged a number of dead bird arriving at school.

I asked Deborah about her literacy programme and she replied that much of it related to developing ideas that contributed to the class inquiries. As for maths it was integrated where possible or there were mini math inquiry topics and she said the children also liked using text books as well.Variety, as ever, is the spice of life. The important thing, we agreed, is that children should see maths as another area to inquire into and get a 'feeling for'. Inquiry is about turning children on to learning - to ensure they become 'seekers, users,and creators of their own knowledge ' as it says in the New Zealand Curriculum. In other word 'life long learners' - or inquirers.

I am the first to admit that not all teachers are able to imitate Deborah's style but all teacher can move along a continuum toward a total inquiry based classroom. Other teacher might like more order and this is fine. Boundaries are important -even if only to break them.

Elwyn Richardson, New Zealand's pioneer creative inquiry based teacher ( he worked in the 1950s) classroom was once described as 'a community of scientists and artists' busy exploring their internal worlds and their immediate environment. Deborah continues this philosophy - integrating an electronic whiteboard and computers.

Teachers who plan one, or even two, enquiry studies a term have not really understood the concept of inquiry as a disposition. Such classrooms result in thin inquiry at best as literacy and numeracy still rule supreme. Not so with such teachers as Deborah. All the above inquiries are the result of one terms work!

Every school has 'stand out' teachers with skills to celebrate and share.

Such teachers are the real experts not the out of town consultants with PowerPoint's with step by step inquiry models to follow. We don't want our classrooms to be full of inquiry processes' and no real content which all too often seem to be the case. Nor do we want to become testers and educational accountants destroying the inquiry dispositions in our students , and ourselves, in the process.

It is all about inspiring each other to become 'seekers, users and creators of our own knowledge'; for us all to be 'inquirers'.
Posted by Bruce Hammonds at 10:09 am

Well beyond the comprehension, or experience, of any ERO reviewers; or many principals for that matter.

And well beyond any standardised testing.

How to share such insight is the challenge of shared leadership, as you say.

Sharing such inspirational teaching is important but there are also other teachers, perhaps not quite so creative, whose ideas are equally important to share -and possibly more understandable and thus 'do-able' .

The point is it only in the classroom where real ideas can be seen, and not from outside experts, or even principals, who have left the organised chaos of the classroom. The further away from the classroom the easier it all seems

Well beyond the comprehension, or experience, of any ERO reviewers; or many principals for that matter.
link exchange
Free English Essay

A transformation in human relations is key to transforming educational practice. IBL is more than a step-by-step process...well put. My work leads me to provide IBL workshops in the US, Hong Kong, and Singapore. Perhaps, we can chat over tea sometime. Check out my website at www.mininggems.org

What is IBL again?