Extreme views on Education -I think not! 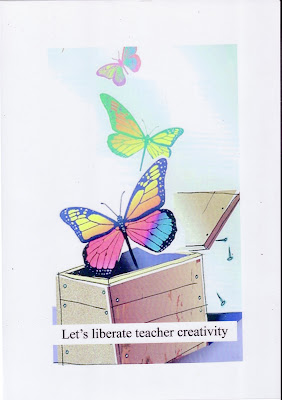 In a comment to my  Christmas blog Mr and Mrs Symonds , formally of Auckland and now living in Sydney, wrote that it was 'because of people like you we have taken our children to be educated in Australia'.  'Your views on education', they wrote, 'are extreme' and 'out of touch with what parents want of a modern education system'.

They began their comment by saying they were 'glad I was going from New Zealand education' and concluded with the phrase 'weird and creepy' - I presume they were referring to themselves? And I have no idea who they  include in the 'people like you' comment nor what they define as a 'modern education system' that parents like them want.

Below is a comment from a New Zealand teacher now working  in Australia. Is this the  'modern system' that parents like the Symonds want? It certainly reflects the agenda of the current government in New Zealand.

'We are right into national testing over here. There is now national testing of all year 3, 5, 7, and 9 students. It just used to be in the other states. Victoria used to be told that we were lagging behind the other states but now, low and behold, after national teaching we are one of the top states. We also have online testing in Numeracy and Maths with the results going to the Department. This is done 3x a year. Our reports are also put directly into the Department. Accountability is everything, don't worry about the teaching. We are told that it does not matter where the students start our job is to get them up to national average and they are trying to bring in performance based pay as well. Also pay incentives for expert teachers and principals to work in disadvantaged areas.’

Sounds very Eastern European to me - something Joseph Stalin would have been proud of or right-wing political American thinkers today. Hardly modern.

Here is what one American educationalist has written ( Glickman 2006)

Today, measuring the accomplishments of students, teachers, and schools by standardised test scores and handing out rewards and punishments for reaching or failing to reach state and federal standards has become commonplace.

In such a climate, we typically err too much on the side of avoiding failure by relying on externally approved " research based" programmes, teaching methods, and assessments that are officially prompted by state and federal governments ( through their agencies).

What we lose in the process is imagination.Failure cannot go unchallenged, but what we have today is our own failure to imagine new possibilities and the worth of what has already worked well*. There is no tragedy in reaching for the stars and falling short; the greatest tragedy in never reaching at all.'

Anyway the below are the 'extreme views' on learning I have been sharing (and will continue to do so) over the years.  I will leave it over to anyone who reads the blog to decide if they are  'weird and creepy' or 'not what parents want for a modern education'.

It is important to appreciate that students are  entering a new age of creativity ; an  era of knowledge creation - where the ability to continue learning, to  develop new ideas, even when confused, will be an important attribute.

I believe that a modern education system ought to focus on developing the talents and gifts of all students and not to judge their success on their test scores only in literacy and numeracy.

I believe that students future success depends on the power of their personal motivation realised :through making choices; achieving mastery; and in the process developing a powerful sense of personal autonomy. As part of gaining success students need to value personal effort and focused practice. These ideas are ignored by standardised testing. Effort and practice sound old fashioned but if neglected little learning will stick.

I believe that learning ought to based on helping students answer questions that engage them in realistic studies; studies that  call on whatever learning areas are necessary to solve the problem. And students also need to appreciate the power of collaborating with others by working in teams.

I believe that the role of the teachers is that of a creative learning coach who follow the advice of educationalist Jerome Bruner who said. 'teaching is the  canny art of intellectual temptation'. Teachers should help students construct their own learning  - and learning should be personalised to suit each learner.

I believe that teachers should ensure all  the various strategies and skills are in place ( including literacy and numeracy)  so students have every chance of success. This includes integrating modern information technology.

To achieve quality learning it is important for students to dig deeply into any learning challenge - to do fewer things well so as to develop the importance of personal excellence.

Can't see what is not 'modern' or is 'weird' in the above.
Posted by Bruce Hammonds at 5:41 pm

I find it hard to believe that Mr & Mrs Symonds actually exist. They have left New Zealand because of people like you??? That is truly bizarre.
Anyway, I liked your thoughts on education. Ta.

Bizarre is the word. Have a good holiday in preparation for next years government interference!

I think it's more maybe my anti National Party point of view that flipped them into such 'creepy' and 'weird' comments. Mind you I was equally against the previous Labour Government with their original NZ Curriculum Framework!

I really cant work out what the Symonds are on about? Nothing 'scary' or 'weird' in what you believe in Bruce - and it looks 'modern' to me. Maybe they just like the standardized approach to learning but there is nothing modern about that. Very traditional, almost Victorian.

Unfortunately many parents like the Symonds do exist out there, mostly, in my experience, they consider themselves to be just too busy to be involved in their children's education except to focus on test scores and harassing teachers. They generally do not believe it is their duty to teach their children anything that is what schools are for and they value an industrial model of schooling individuality in --> uniformity out. Unfortunately they seem to hold sway these days hence the "units of learning" and "standardised testing"

Spot on, Bruce. The future will show that you are right, even if the next few years will be a battle to save children's rights to a full and rich education. What did Rob Muldoon say about people who emigrated to Australia?

I feel you are right Lance. Some people just want simplistic solutions to complex problems - like measuring educational progress in a narrow range of learning ( literacy and numeracy). Just like in the 'good old days'! Uniforms, exams,pass/fail (as long as their kids don't fail)and being able to give back what the teacher taught them. A transmission standards based antiquated style of teaching.

Glad to have you back Allan - the next few years will be a battle between the false certainties of the past and the diversity and creativity required to thrive in an unpredictable future.

Hi Bruce - Maybe Mr and Mrs Symonds are aka Mrs & Mrs Banks or Key! I so enjoy your comments and often quote to parents and other teachers even though I own my preschool now after 30 years in primary teaching including teaching principal. It amazes me how our 3-5 year olds soak up knowledge, skills and manage to have a blast while doing so. My so called 'teaching' is limited to just 15 minutes a day with the 6 oldest children. I wish I could go back and run my new entrant ( and other classes) in a similar way. My concern with National Standards will be the push down effect that may come from schools or the ministry to have our preschoolers more ready for school. Playful learning is my new catch phrase around here. All the best for 2012 I am thankful you (and Kelvyn) are able to do the digging for the rest of us - I barely have to read my own paperwork!

We left New Zealand some years ago to. My children were 2 years behind on essential skills and eventually caught up. Eventually children have to have certain hard skills hammered into them. They were not even performing carrying operations on two-digit sums in 5th grade yet. My children were bored in New Zealand schools and thrived when presented with challenges after they left - "creativity" was essentially all the children in the class drawing the same pukeko or tuatara or whatever they were instructed to represent, no creativity involved there! New Zealand's self-reported and selective educational statistics would not hold up if all students were rigorously examined to determine the actual extent of their knowledge. On the other hand, I found their early grades just fantastic (kindy, 1st). The further you go, however, the worse it gets.