Standardization of America and democratic Finland. 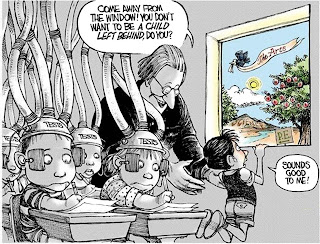 The cartoon sums up what is happening in education!


I  was sent links to a couple of interesting links recently by my friend Allan.

The first was written by veteran American educator Marion Brady who writes for the Washington Post and printed in the Florida Today.

Brady writes about the current test based education reform movement  saying that the  so-called education reforms is being put in place by business leaders and politicians who believe that current system had become soft and lax and that educators weren't motivated to do their best - what was needed was discipline, rigor, tighten the screws, clamp down.

Rigor in the American scene is cutting recess and replace with instruction. Cut the frills., cut art, cut music, cut everything except reading and math.And then turn the school day into a reading and maths drill and reading and math exercises , and get those scores up.

Brady writes that Linda Darling Hammond who was Obama's primary education adviser was seen as unacceptable to corporate interests because she didn't buy into the assumption that what was needed was rigor. As corporate interests wanted someone to sort out the unions. As a result non educators ate now responsible for setting polices - educators are excluded from the debate.

He says that any country that teaches it's kids only what standardized scored tests can measure is doomed.It puts a cap on education, a cap on intellectual performance that is far too low.

The only alternative if for teacher evaluation , because he says, teachers see kids every day, all day. They hear the dialogue, they can evaluate the intellectual processes that are taking place as kids try to solve problems and figure out answers to difficult questions.

Unfortunately, he says,  the general public have been convinced this is not acceptable.

And we are busy following the Americans and the English!!!

The second link came from the Guardian and compared the English International scores with Finland.

Finland seems the country of choice at the moment so it was interesting to see the English take on the subject.

In 2009 the UK's policy directors suffered a significant blow. The  OECD International PISA tests ranked UK well down the international league tables in reading maths and science scoring 25th in reading, 28th in maths and 16th  in science. ( New Zealand by the way places in the top 5 for such tests). To confuse the issue te UK is ranked 8th in the table for educational spending per pupil but had a 23rd position average overall.!!

Only one Western country has excelled in PISA ratings consistently over the years - Finland. Their sustained success has for many years prompted educationalists to consider how they have achieved this.

The reasons for Finland's success is complex but a number of interdependent complementary factors are involved including teaching is a prestigious career- teachers are highly trained paid and respected.

Teachers assessment are used to by schools to monitor progress and these are not graded, scored or compared; but instructed are descriptive and util zed in a formative manner to inform feedback and assessment for learning.Ironically the Finnish curriculum is far less 'academic' than you would expect  and the Finnish students do the least number of class hours per week in the developed world. Study's in Finland it no exams until the age of 17-19.

Great emphasis is placed on pupil and teacher trust and well being.Outdoor, practical learning opportunities and healthy related physical activity sessions are a regular feature in the curriculum; helping to maintain a healthy body and mind.

Finnish schools receive full autonomy, with head teachers and teachers experience considerable independence when developing their own individual curricula: suited to their settings. Combinations of alternative pedagogic approaches, rather than mrer instructional methods are utilized by the teachers. The pedagogical freedoms experienced facilitates greater creativity, pro-activity and innovation. ( The premise of the now sidelined 2007 New Zealand National Curriculum!!)

Finland's Minister of Educations philosophy has been to trust the professionals. The Finnish system prides itself on positively evolving with pupil's needs and interests at heart.  Professional Learning Communities are integral to the  sharing and spreading of good practices.

All students receive a free education from when the start school at seven until they complete university studies - receiving schools meals and resources on the way.

All classes contain a mixture of ability level pupils, with most classes containing two or more teachers who focus on those needing additional support. Many teachers also stay with a single class for many years, moving with them through the school. Many primary and secondary schools are combined avoiding unsettling transitions allowing a consistent ethos and common language to pervade. Study's address teachers by their Christian names , do not wear uniforms and are encouraged to relax in their surrounding.


The Finnish system is built on the idea that 'less can be more' and could appear counter intuitive to other countries in which standards an effectiveness are measured in standardization data.

It is worth remembering the Finland is a homogeneous society and lacks the corrosive competitive ethos of many Western countries but also that Finland ended WW2 exhausted after fighting Russia to a standstill and has developed economically since then by challenging outworn assumptions in education along with other areas.

New Zealand business oriented politicians and  policy makes are taking down the path being followed by the United States and England ( and Australia). Recently the Leader of the Opposition suggest Finley was a country we could do well to emulate.

With 4 million people, a high GDP and high well being, Finland is worth the attention.

Those with longer memories  will appreciate that the student centred  approach Finland has developed was at the heart of  the New Zealand Education system until the market led forces of  educational reforms of the 1980s.

In the meantime we blindly follow failed approaches of the USA and the UK - the new Secretary of Education comes to us from England having never been a teacher.

Time to take a new path - or to return to successes of the past - success that gave up our high rating on PISA tests!

Why do our politicians want to ape the US and the UK - as you say we were once world leaders ourselves - up with Finland almost.