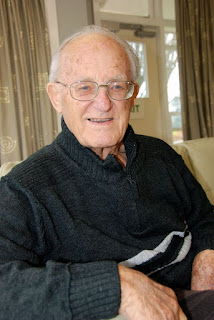 On December the 24th Elwyn Richardson, New Zealand pioneer creative teacher died. Richardson was born July 8, 1925.
Elwyn was an inspiration to teachers who were interested in a creative approach to learning. I first learnt about Elwyn in the early 60s, first by reputation, and then through his book ‘In the Early World’ published by the NZCER in 1964.
In the sixties there were a number of NZ teachers experimenting along the same lines as Elwyn. In the UK, there were also teachers interested in freeing up the traditional curriculum. In 1969, in the UK, the Plowden Report was published which gave ‘child centred’ education official approval. In the late 60s I worked with local teachers whowere integrating their programmes placing first hand experiences and thecreative arts central. At this time I made my first contact with Elwyn - the beginning of a long association.
A little background about Elwyn. He applied for the remote country position at Oruaiti School in 1949 largely because of its distinct fauna of sea life, but also because the sole-charge posting offered him the opportunity to work out his own ideas about teaching and learning alone. .
Elwyn’s educational philosophy was based on the belief that all real learning must be anchored in personal experience. It was this conviction that provided the foundation for his developmental approach to education. Central to this was his theory of integration, a personalised process whereby children moved from one expressive medium to another, between all subject areas. Richardson’s theory of integration was informed by his conception of artistic ability as a universal human attribute, his well-developed ideas about the nature of artistic development in children and a firm belief in the learning potential of every child.
At Oruaiti School Elwyn discarded the official syllabus and turned to the children’s lives and immediate environment for the basis of his curriculum. Using the children’s natural curiosity and interest, he taught them how to observe closely the world around them and to record their new discoveries and their own responses to these. From here, he developed a school programme that was anchored in the children’s surroundings and real lives. Through environmental studies the children learned the basis of scientific method, and brought these skills to bear on studies that spanned all subjects. His method was a revolt away from science as a separate subject to an integrated programme of arts and science.
Elwyn’s book ‘In the Early World’ was published by The New Zealand Council for Educational Research NZCER in 1964. The book tells the story of how his students became increasingly aware of their own capacity for personal expression, while collectively establishing a shared understanding of aesthetic values.


The book was well received by the New Zealand educational establishment and widely taken up as a text by teacher training colleges in New Zealand in the 1960s and 1970s. Joseph Featherstone former professor of education emeritus at Michigan State University, reviewed the book and stated, 'it may be the best book about teaching ever written.' Following Featherstone’s review Pantheon Books published a Canadian and an American edition simultaneously in 1969. The book was praised by international reviewers. British writer and musician R. W. B. Lewis wrote, 'Not only does this book point to a new direction in education, its very existence is a landmark in the recognition of human potential and dignity.' Over the next decade Richardson and his school became an international symbol of progressive education in New Zealand with a particular focus on arts and crafts.
A third edition witha new foreword and a twenty page appendix of children's art work has beenpublished by NZCER  June 2012.

I was invited to attend the opening in Auckland – it was to be my last contact with Elwyn.
In the forward to the first edition of Elwyn’s book John Melser wrote that the book, ‘gives a vivid picture of a school full of vitality in the pursuit of values deeply rooted in the children’s lives and capable of serving them lifelong’. ‘Oruaiti School’, Melser continues, ‘functioned as a community of artists and scientists who turned a frank and searching gaze on all that came within their gambit. Curiosity and emotional force led them to explore the natural world and the world of their feelings…..Studies and activities grew out of what preceded them. New techniques were discovered and skills practiced as each achievement set new standards.’
Elwyn’s role in achieving personal and artistic excellence was a delicate and encouraging one, always humbly ready to learn from the children. Elwyn has written elsewhere that ‘the children were his teachers as much as he was theirs’. The results were certainly not the standardization of product that one sees today. Believing in high standards  Elwyn  believed  each new creative product mattered as much as the process.
Elwyn, along with all the other creative teachers I have had the privilege of working with, responded to all children’s efforts and achievements with sincere interest and pride. His book is a testament to his love of children’s ideas and imagery and, the respect he gave their work, respect that was returned in kind to Elwyn. Elwyn gave his students Melser writes, ‘an opportunity to reach their full heights as artists, as craftsmen, as scientists, and as students’ in a ‘community of mutual respect’.
Unfortunately since 1986 the winds of change worldwide have sent school off in another direction towards standardised education -an approach that undermines the very creativity and diversity that New Zealand educators had gained world-wide respect for.  Unfortunately, in recent decades, 'experts' from outside the classroom have become the sources of ‘official’ knowledge and this has led to a reduction in the importance of those creative teachers. This is a shame.
It is time for schools to return to believing in the importance of creative teachers as the source of lasting change.  Teachers will need to work together (they now have the technology to do so) to articulate a set of beliefs for the new century - one thing that they could do is get behind the almost side tracked 2007 New Zealand National Curriculum.
The new edition has a hard hitting forward written by educationalist.  Gwenneth Phillips.
Gwenneth writes  that the book comes at an opportune time as the current government is finally showing its true 'market forces' neo liberal competitive ideology with its intention to introduce 'League Tables' based on National Standards data to encourage competitionn through students and school comparison.
Schools she believes now have a moral dilemma - to comply to such impositions that will narrow the curriculum and encourage teachers to teach to the tests and the side lining of the creative arts, or  to be creative. Ironically countries that have imposed such approaches are well behind New Zealand in international testing!
'Times have changed,’ Gwenneth writes,’ educational decision making has shifted from such innovative educators to non-teaching politicians and policy makers; and in the classroom from practicing teachers to academics.'
‘This new guard of decision makers' Gwenneth writes, ‘juggle political, fiscal and/or research agendas’. ‘Teachers’, she writes, 'have long struggled with the conflicting demands.....in particular the demands for accountability- based on the precise articulation of outcomes as well as their measurement. As a result, the basic tenants of our unique child-centred approach...have been compromised.....the child's creative power has been strangled and the child marginalised'.
One might add so has the creative power of teachers and creative schools.


'An old challenge has re-emerged. How can we put the lives of children and our trust in their creative power back into classroom practice?' And how can we develop trust in teachers to be creative in our present risk averse surveillance culture!
Gwenneth believes this new edition of Elwyn's book is both timely and important, for this challenge is at the heart of present debate. It presents a backdrop to current issues in education and to teachers' concerns - the narrowing of the curriculum, the setting of externally prescribed adult motivated progressions and outputs that neglect the developmental nature of learning'.
Elwyn's student's success was sustained by the knowledge and professional artistry of a caring teacher who esteemed the voice and thinking of the children. As Elwyn himself wrote, ' they were my teachers as I was theirs, and the basis was sincerity, without which, I am convinced, there can be no creative education.'
The ways of working captured in Elwyn’s book are 'in stark contrast to that have emerged in the last decades. Current ways are based clearly articulated and predetermined pathways. The children are forced to state goals and are evaluated through criteria and standards that conform not to their own understandings of themselves in the world, but by expectations dissected from the forms and structures of adult thinking.' These approaches, Gwenneth writes, 'are the antithesis of child centred approaches. They marginalise children and show little respect for their creative power to develop their own life-learning pathways'
The choice for schools is clear: Standardisation of learning or personalization that celebrates every student’s unique gift and talents.
Unfortunately many schools are well down this imposed formulaic 'best practices' approaches. Gwenneth writes, 'for many teachers, especially primary teachers, the knowledge and professional artistry of their child-centred practice has been usurped; the courage and tenacity of the pioneering spirit stifled; and the recognition and trust of the child's creative power has been undermined.'
'In The Early World, together with the stories of other early pioneers, tempered with new insights...has the power to inspire a '"new" guard of educational pioneers'. It is a book that 'celebrates the pioneering spirit of New Zealand teachers'
Creative teaching is not new it has just been side-tracked.
Elwyn remains as an inspiration of what can be achieved if we want to develop the talents and gifts of all students.
I recommend that all schools acquire a copy of the latest edition if only to show what could have been.
Posted by Bruce Hammonds at 2:54 pm

Such an inspiration. Thank you for this wonderful post Bruce.
Kind regards
Jody

Thankfully The Song of the Bird documentary is on YouTube. http://youtu.be/WYMdmvinFIM

The initial edition associated with Elwyn’s publication John Melser published the publication, ‘gives a brilliant graphic on the education packed with energy source inside goal associated with prices seriously grounded inside children’s life and capable of portion these lifelong’. Elwyn provides authored in other places of which ‘the children had been his or her lecturers as much as your dog has been theirs’. The outcome had been definitely not this standardization associated with supplement you recognizes these days. Believing around excessive benchmarks Elwyn thought each and every new inventive supplement mattered as much as accomplishing this.
Lecturers should have interaction (that they are in possession of this know-how to try and do and so) in order to state a collection associated with beliefs for your new one hundred year.
Thanks for sharing such a valuable information. It's remarkable!
http://educationinn.com/international-buisness-scholarship-at-birmingham-university-uk/