2013 saw the completion of my bush walk which now circles the house.

I bought the property in 1970 and took far too seriously from the previous owner a landscape gardener ( possibly the first landscape gardener in the province) that it was a 'wilderness garden'. As I was busy working as a school adviser the idea appealed.
﻿

I had originally seen the property in 1969 but was unable to put together the money to acquire it. I decided instead to travel to England to visit some creative child-centred schools I had read about.

One reason why I want put up this post is to share the garden with a very good friend I met in 1969 and who I have kept in touch with.
﻿﻿﻿
﻿
The property, once part of farmland close to the city of New Plymouth, was bought by Mrs V C Davies ( Duncan and Davies were a well known plant nursery based in the city). Mrs Davies added to the original coastal forest almost every native tree you can think of including several kauri.  In 1954' D and Ds' landscape gardener bought the land and built a small house  with a walking track down from the road. Later the house was added to and a drive established. The new owner then planted a wide range of introduced plants and established some tracks.

After removing some very large introduced trees and a out of control hydrangea hedge, planting smaller natives and spreading shade loving plants like hostas, plus bridges and duck-walks , the garden is now ( more or less) tamed. 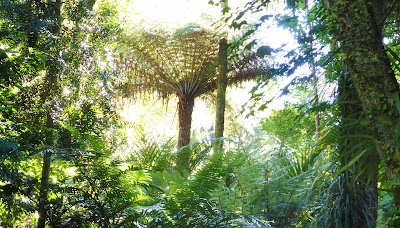 Wilderness now tamed.
Posted by Bruce Hammonds at 11:30 am

You have been a busy boy Bruce - all your own work? Very impressive!

Ichy and Scratchy have changed their jobs and become sophisti cats and they really love your garden it shows great purrrpuse as well as great sophistication and your philosophy is great! They hope you have a great Christmas
Ichy and Scratchy

Nice to have you back Itchy and Scratchy - got a new pad I hear! Purrrfect!

Not all my own work but far more than I used to do as an educator. Giving advice is easy! Did make the last track, 13 steps, all by my self - still recovering.

Wow, Bruce! It's impressive. Even Onaero wilderness can't compete. What are you doing for lunch tomorrow? We'll bring the food (as promised about this time last year!)About 1pm.??
Cheers
J and J

See you tomorrow J and J - I'll put on the coffee!!

Hi Suzy You will enjoy Vietnam - went there a few years ago. Great place. Love to show you around the bush walk!