I happened to listen to an interview on National Radio with Tanith Carey about the negative effects rise of the 'tiger parent'.

The book, although primarily aimed at parents, has a strong message for schools as well. Although written with the UK market in mind as we move along similar educational  ( more political) approaches it provides a warning for us in New Zealand.. In the UK children are not helped by  the 'increasingly narrow focus on targets and league tables in schools'.

As part of the current 'winner takes all society' , Tanith writes, there is less opportunity for children to learn through play and creative activities. Children are now 'constantly measured to assess their chances of success in every area'. Children in the UK are now  the most tested on earth and as a result many feel stress and anxiety ( as do their patents) they might fail worrying that in  a 'toxic' competitive environment not all can win..

Although  society has created this self centered environment Tanith writes  that this is not helped by 'pushy education ministers'. Couldn't but not think of our own minister in this respect!

Ambitious middle class parents feel the stress to ensure their children are 'winners' while at the same time children from economically deprived families has even less chance of success, through no fault of their own, - the 'achievement tail.'  At one end of the social scale  high- stakes testing is turbo charging an elite class of alpha children who have been on the hamster wheel from birth'  and at the other extreme children who have no chance of catching up. In the UK this has resulted in a 'two-tier education system with a huge achievement gap.' Sounds familiar?

It is obviously important, Tanith writes, that we must help children reach their potential but that this ought to be based on their individual strengths and not be set by 'the standards of schools intent on boosting their reputations on league tables - or the economic goals of governments'.

The competitive society is changing childhood.  Children are increasingly being seen as consumers of education  and in the process we are depriving 'kids of the experiences that create resilience and emotional balance'. Tanith  is asking parents ( and schools ) to   value childrens'  individual strengths and talents. Parents ( and schools) 'must tread the line between supporting our children and stifling them.' 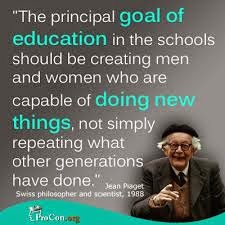 In her book Tanith explains how children have been seen over the ages.  In recent times it has been the influence of Swiss developmental psychologist Jean Piaget  that had made the most impact, According to Piaget ideas children should be viewed as 'little scientists' learning through open ended play but this has been supplanted  by an overriding need to get ahead - as seen by achievement on tests.

The beginning of this need to compete was sparked at first by the Japanese and later other Asian success in seen in international testing results.

The first 'tiger parents' were the 'kyoika mama'  - Japanese mothers who based their own worth by their children's success. Tanith  describes the downside of such intense pressure. It is now China that scares the West these days. Ironically both Japan, and later China , realising the  negative effect of the intense pressure to succeed,  are now encouraging their schools to focus on sparking children's curiosity.

Shanghai ( not China) in 2009 topped the PISA tests; Shanghai is an affluent city where 80% of the children go on to university but this has not been without its costs and like the Japanese the Chinese are calling their education system a failure.. They have found their children are lacking in initiative, self discipline,  a passion for learning for intrinsic reasons, and are looking to the West for answers. At the time we are moving into a standardized test  driven culture  sidelining  talent development and  creativity. in the process.

Tanith favours  another country that does well in international league tables - Finland.

Finland is a country where  schooling does not start until seven children are thirsty for knowledge and where there are no formal tests until the age of 16. It has taken Finland forty years to transform their system In the process they scrapped private education, streaming and school inspections. and  now students
work cooperatively in mixed sets in the classroom and,as a result, they have a culture which puts high value on the independence and individuality of pupils. As a result they have no 'achievement tail'.

In contrast in the West children have no time to work out their own strengths and, instead, are judged in  comparative contests ( literacy and numeracy) they didn't ask to compete in.  Parents  now try to give their children every opportunity to succeed after school leaving no room for children to play. At primary schools  children are tested and schools told that their reputation of teachers and schools rides on the results.

In the UK children's stress levels, anxiety and mental health is increasingly put at risk.

Parents are overly concerned with 'how their children do rather who their children are'. Children ( parents) now compete to gain access to kindergarten and  their children's progress is tracked by checklists and documented 'learning journeys'.

Here in New Zealand we haven't yet had official league tables as in the UK.

In the UK the schools are as pushy as parents. Sadly, writes Tanith,,' there is no a box to tick for learning for the sake of it' as schools become more about testing than teaching'. When children first enter school they are happily unaware of how they compare with their classmates' but , kids soon learn to measure their achievements not in their own right, but in comparison to others. The more the winners win they get rewarded and conversely the more the losers lose they get dispirited and give up.

Schools are turning up the temperature in this competitive winner/loser society. 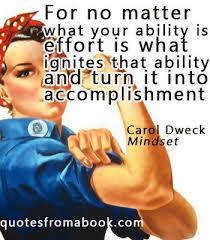 Even when teachers disguise their ability groups with various colours, or names of animals, children soon become aware who are the winners and losers.. What schools value is measured and as personal qualities and individual talents are not as measured the wrong values are passed on to the learners.

Tanith provides several chapters to help parents resist the pressure, both at home and at school, and recommends a 'benign neglect' style of parenting giving  children time to play/learn and to explore ' - encouraging their children to compare their progress with their previews efforts not with others. She suggests encouraging things of interest to them.   She also recommends the ideas of valuing effort and perseverance as against intelligence or talent -   psychology  professor Carol Dweck's 'growth mindset'.

Tanitb advises parents ( and I would add teachers)  to help children to 'find their spark - a skill, a talent or interest which your child is naturally good at, and which genuine excites them'....  'A spark always draws on an innate talent because kids naturally like to do what they are good at.' I can think of many creative teachers who would like the freedom to do exactly this. 'If a child cannot do something it is usually because they haven't had the chance to learn or practice'. We are talking about an 'opportunity' not an 'achievement gap!'

Tanith concludes her book with a plea for parents( and schools)  to resist herding children into two camps - academic and non academic and introduces readers to the multiple ideas intelligence of Howard Gardner; that there are multiple ways of 'being smart'.

She also reconnecting children with nature and give them plenty of opportunities for unstructured play and makes the important point that play and learning are not two different things. 'Studies show  that all subjects are best taught through real life experiences'.

She recommends that parents find  schools with 'truly progressive teaching in place'  Difficult in am
environment where schools are  increasingly obsessed with developing reputations based on their achievement levels in literacy and numeracy. Tanith worries that in schools continually assessing students that, for many, 'confidence in learning is easily shattered and can take a long time to rebuild'.

For teachers in New Zealand , where schools have not yet gone down the 'league table' path, it is not too late.

There was a time when New Zealand  primary schools had a lot in common with the developments now seem in Finnish schools 'where there is a commitment to think, not just what to learn'.

We have a curriculum that will do the trick for New Zealand schools but to be implemented National Standards need to seen in perspective. Time to get the curriculum of the shelf and start heading in the right direction again.

'We need to return to a childhood where children are  allowed to find the time to develop at their own pace through play and self discovery; and to move away  an education based on constant comparisons based on a narrow conception of intelligence.

It is not the parents fault  that society is organised along winner and loser lines nor 'the teachers fault  that they have to feed a monster
of an education system with high -flying exam results- or be considered failing themselves'. 'We must set standards', Tanith

writes, ' but they should be for effort and originality, not just attainment. Yes , we must help them reach their potential, but one that is consistent with their innate skills and personality.....there is point in seeking the same one size fits all.'.

Our future depends on developing the talents of all our children/students - not dividing them into winners and losers. 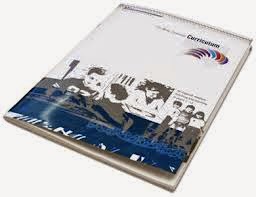 'We must set side our ideas of what our children are supposed to be- and let them be what they are' - or could be if we , both parents and teachers, gave them the opportunities.

Posted by Bruce Hammonds at 7:52 am