Creative education.Education Readings for teachers fighting for what's worth fighting for. Ideas to develop a school vision.

————————
Some of you may have noticed that I didn’t send out a readings list last week.
Sadly this was because Bruce Hammonds’ daughter Kathy, a nurse, lost her life in an accident following a day’s snowboarding on the mountain.

If you want to express your condolences to Bruce his email address is bhammonds@clear.net.nz
————————

Peggy Burrows, highly regarded principal of Rangiora High School, has been victimised in what seems to be a Ministry of Education hatchet job. Kelvin Smythe has taken up his keyboard to write the following two articles exposing this travesty. A very active Facebook page has also been set up to fight for justice for Peggy.

Another huge bureaucratic injustice
“It is another case of the education bureaucracy listening to the wrong people; believing them to be the worth listening to because, it seems, they want to believe teaching professionals aren’t. The government and education bureaucrats are doing inhumane things to professional educators as an expression, it is suggested, of a kind of perverted education policy.”
http://bit.ly/1NdyRS6

You are urged to sign the petition to support Peggy Burrows, principal, Rangiora High School
“From the response to an earlier posting by two people supporting the intervention two worrying but not uncommon themes made an appearance: anti-women (not capable of handling complex finances) and Peggy being too pro-Maori…”
http://bit.ly/1NI8DKH8

How to Master the Art of “Effective Surprise” and the 6 Essential Conditions for Creativity
The great Harvard psychologist Jerome Bruner had his 100th birthday last week. Here’s a Brainpickings article that discusses his thinking about creativity.
“There is something antic about creating, although the enterprise be serious. And there is a matching antic spirit that goes with writing about it, for if ever there was a silent process, it is the creative one. Antic and serious and silent. Yet there is good reason to inquire about creativity, a reason beyond practicality, for practicality is not a reason but a justification after the fact. The reason is the ancient search of the humanist for the excellence of man: the next creative act may bring man to a new dignity.”
http://bit.ly/1hf8gsb

Following on, here’s another Brainpickings article:

Happy 100th Birthday, Jerome Bruner: The Pioneering Psychologist on the Act of Discovery and the Key to True Learning

“Discovery … is in its essence a matter of rearranging or transforming evidence in such a way that one is enabled to go beyond the evidence so reassembled to new insights. It may well be that an additional fact or shred of evidence makes this larger transformation possible. But it is often not even dependent on new information.
http://bit.ly/1j4r27y 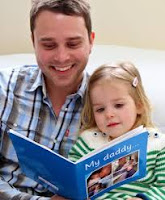 Why story time is better when dad’s reading the book
“Watching a father read to his child sends a very strong message that he is interested in spending time with his child and engages his child in one of the most rewarding and beneficial activities for children's development.”
http://bit.ly/1RbJQfH

The Joyful, Illiterate Kindergartners of Finland

Haven’t had a Finland story for a while so…
“The word “joy” caught me off guard—I’m certainly not used to hearing the word in conversations about education in America, where I received my training and taught for several years. But Holappa, detecting my surprise, reiterated that the country’s early-childhood education program indeed places a heavy emphasis on “joy,” which along with play is explicitly written into the curriculum as a learning concept.”
http://theatln.tc/1OD9TgJ

Science Shows Something Surprising About People Who Still Read Fiction

Many so-called ‘reformers’ have downgraded fiction and instead set standards for reading non-fiction books, on the basis that these will be more ‘use’ to children as they enter the workforce….
“Researchers calculated emotional transportation by having participants express how a story they read affected them emotionally on a five-point scale — for example, how the main character's success made them feel, and how sorry they felt for the characters.
In the study, empathy was only apparent in the groups of people who read fiction and who were emotionally transported. Meanwhile, those who were not transported demonstrated a decrease in empathy.”
http://bit.ly/1Llm2lP

Teacher Agency: Educators Moving from a Fixed to a Growth Mindset
“Educational psychology has focused on the concepts of learned helplessness and more currently growth-fixed mindsets as a way to explain how and why students give up in the classroom setting.  These ideas can also be applied to educators in this day of forced standardization, testing, scripted curriculum, and school initiatives.”
http://bit.ly/1Lbs7n7

Life-long, life-deep and life-wide learning
“In  a classroom, or within any group of learners, the reality is that each individual has a different learning experience, even while they all are instructed the same way. Fascinating, isn't it? We all bring into the learning situation our own learning history and cultural background, our life-long, life-wide and life-deep understanding what learning is. What we all need is support for our individual development, and empowering learning facilitation that helps us to learn even more.”
http://bit.ly/1jB8V8Q 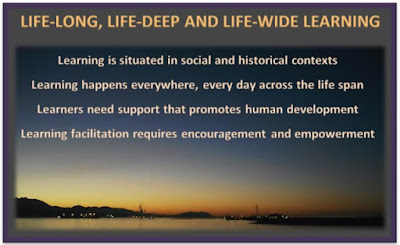 The Importance of Recreational Math
“In his final article for Scientific American, in 1998, Mr. Gardner lamented the “glacial” progress resulting from his efforts to have recreational math introduced into school curriculums “as a way to

interest young students in the wonders of mathematics.” Indeed, a paper this year in the Journal of Humanistic Mathematics points out that recreational math can be used to awaken mathematics-related “joy,” “satisfaction,” “excitement” and “curiosity” in students, which the educational policies of several countries (including China, India, Finland, Sweden, England, Singapore and Japan) call for in writing.”
http://nyti.ms/1X55eqF

Secret Teacher: brilliant eccentrics are a dying breed in education
“Over my 10 years in teaching, I have seen eccentric colleagues pushed, blinking and disorientated, into a new world of lesson observations, targets, data and appraisals. There are undoubtedly those who, as well as being eccentric, are rather lazy and probably not up to the job. But the problem is that many of these mavericks, who wouldn’t recognise a lesson plan if it bit them on the behind and couldn’t care less about student data or targets, are brilliant.”
http://bit.ly/1RbL2zK

'An education in the arts is limited to the economically privileged. It is an unjust waste of national talent’
This is so true.
“A good education should be a preparation for life. It requires the development of the whole child, not merely their intellect. It necessitates students becoming intrinsic learners with self-discipline and a genuine thirst for knowledge, rather than being goaded or corralled, which is what students may become with a single-minded focus on exam results. The value of arts and culture is important for all students.”
http://bit.ly/1GHLhwE There's no better feeling that seeing design concepts and sketches come to life before your eyes.  This is an idea schools could make use of? Real personalised portfolios of students’ ideas.
“I believe that the process of a project is just as important as the final product; it shows a journey and a connection between an initial idea and the physical design it ends up becoming. It's a transformation and a visual representation of the ability to do none other than create. The design process is a beautiful thing, and it's always been something that I've prided myself on in my work.”
http://bit.ly/1KakWaM

The power of visiting other schools 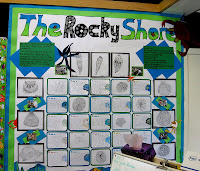 “Focused school visits are a powerful means to gain professional development and, in particular, to gain insights in to what other schools/teachers feel important. This is all the more necessary as schools are increasingly under pressure to distort their teaching programmes by the need to respond to the reactionary and politically inspired introduction of National Standards.”
http://bit.ly/1LuEr3b

A process to develop a School Vision
“The following is a simple but powerful process to 'tap the wisdom' of all involved but one that demands shared leadership, particularly by key people in the school – and of course total commitment by the principal. All involved must see the benefit of developing such a vision and be determined to see that it is reflected in the: values the school believes in (as seen by behaviours of students, teachers and parents); and the agreed teaching beliefs of the school.”

Posted by Bruce Hammonds at 1:31 pm

It is important to remember that technology based learning is only part of the whole picture at Tairua School. Half the day is spent on the basics, reading, writing, maths etc. They also have a focus on PE and outdoor activities such as swimming, Kayaking and Sailing.

Thanks anon. As I mentioned I do not have any real knowledge about the school. I do worry about half the day ( the morning) given over to the 'basics'. I would be interested how much such 'basics' contribute to the inquiry programme and if ability grouping is part of this? The outdoor activities sound great.