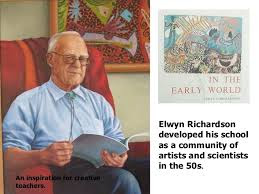 Returning to the early world of creative education
Elwyn Richardson 1925-2012
He toi whakairo he mana tangata – where there is artistic excellence there is human dignity.

Back to the future


There was a time when New Zealand  primary education was internationally recognised for placing the learner at the centre of learning. When education was driven by a belief in the creative power of the learners themselves; when learning was based on the internal and external lives of the 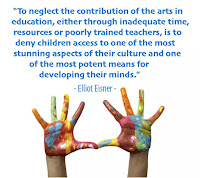 
But sinceTomorrows Schools things have changed.  Today schools have been distracted by assessment, achievement data and measurement by standards.  The evidence is becoming clear in our rush to towards achieving measurable results children’s curiosity has been eroded.


As part of this change educational decision making has shifted from innovative teachers to political imperatives and their non-teaching policy makers. Today ‘flexible learning environments’ and access to modern information technology are seen as the answer, associated with all the appropriate words: student agency, collaborative learning and teacher teamwork.


For all this what has been forgotten that it is the quality of the teacher that ensure such modern environments are conducive to learning; it’s the pedagogy, or teaching beliefs, that teachers hold is all important.


New Zealand’s earlier recognition was based on the writings of outlier Sylvia Ashton Warner, the developmental programmes led by junior school teachers , the leadership of the then Director of Education Dr  Clarence Beeby who created the environment for educational transformation and Dame Marie Clay.

And, of course, the ideas were not entirely new having their genesis in the writings of American Educator John Dewey..


Dr Beeby appointed Gordon Tovey to develop an art advisory service who were integralto the identifying and supporting creative teachers throughout the country and in the spreading of creative teaching ideas; an education where feeling and intellect, living and learning were inseparately intertwined.


Today we have come full circle and it time to put the lives of our children and our trust in their creative power back into classroom practice.


One teacher stands out as the best known exemplar of such teaching- Elwyn S Richardson. I wonder how many teachers today are even aware of the pioneer creative work achieved by Elwyn.

Thankfully he wrote, what many people still think was the best book ever on teaching and learning, ‘Inthe Early World’ first published in1964 and perceptively recently reprintedby the NZCER in 2012.


The book is timely indeed as essential elements of child centred practices have been diluted, even distorted, by those who have little understanding of how students learn and the reality of being a classroom teacher  and with their desire to assess and measure learning –  in the process narrowing the curriculum and the  side-lining  of the creative arts.


A community of scientists and Artists


Elwyn saw his classroom as a busy community of scientists and artists whose role with him as their guide to explore their natural world and the world of their feelings; students active in the process of seeing themselves as worthwhile individuals.


Before Tomorrows Schools it was creative teachers who were seen as the key to educational transformation. Today the power lies with the curriculum developers, accountability experts, and

leadership of principals. Today it is time to return the focus to identifying and sharing the ideas of creative teachers and for principals to see their role as creating the conditions for such teachers to have the confidence to return to centre stage.


The 2007 New Zealand Curriculum, having been side-lined by the previous government, now needs to be fully implemented.


Developing a meaningful curriculum based on curiosity.


Elwyn forged connections with the children’s lives and created a meaningful curriculum. He placed student curiosity at the heart of all that was done focussing on intriguing questions that motivated them to pursue avenues of inquiry naturally integrating the curriculum. He encouraged the freedom to explore, the opportunity to observe closely, and the discipline to record findings in various ways, He upheld the value of the arts and realised that one subject informs another; that scientific understanding is enhanced by the aesthetic, and vice versa.


Development of high standards of excellence

Like JohnDewey he did not allow just any activity to count as learning. He challenged children to explore, ask questions, try things out, consider alternatives, and craft and recraft to produce high quality work; art work worthy of exhibitions, science projects like those of real scientists, vivid poetry and other writing published in regular school magazines. This is teaching at its finest. Children like adults, enjoy the feelings of being stretched and achieving something they are proud of. At his school, Oruaiti in the far north, his pupils were afforded the dignity of being taken seriously as critics, writers, artists, scientists and thinkers.


Breaking away from teacher dominated approaches.


Elwyn’s book outlines his own story in breaking away from the then teacher dominated approach in the process learning to trust the creative power of the children.  In this respect he is both a teacher and a learner constantly, through child and error searching for the balance between being a teacher and being a learner. The book shows that he struggles with this dual role; ‘Am in over directing or am I under directing’ and he often abandons his own planning in favour of the teachable moment. In the end the children are triumphant and the learning is based on their own lives. Real satisfaction comes from losing oneself in a subject which evokes a depth of focus and appreciation giving children licence to bring who they are and what they cherish to their learning.


This is teaching as an art form; the artistry of the creative teacher.


The student’s work, which is a feature of Elwyn’s book underlies how values and excellence are formed in the process of creative achievement. Elwyn’s process is based in recognising small excellences in student’s work and through discussions developing community standards of excellence. Such minor excellences were seen as stepping stones for further thinking and in-depth expression.


Developing such standards of excellence is the professional artistry of a caring teacher who esteemed the voice and thinking of the children. This is in strong contrast to today where students are judged against adult standards and criteria that impinge on student’s individuality. Such current teacher dominated approaches are the antithesis of chid centred learning, all about conformity rather than creativity.


The work included in Elwyn’s book shows that his student’s took their work seriously; the
sensitive poetry, the careful observation of their immediate environment, the graphic print and ceramic work and dramatic experiences.  The book makes clear the process that the teachers introduced to develop quality personal achievements.


The process was a delicate one, with the teacher leading and directing but at the same time humbly ready to learn from the children. The idea that that the end product doesn’t matter –it’s only the process, is simple minded. Children will only grow in a classroom where high standards prevail and where their work will be tested by the critical insight of others. Each new achievement is a springboards for later leaps in imagination and understanding. In such a learning community students are perpetually challenged to achieve their creative powers and the work they create becomes a record of their achievements.


The patterns of work in Elwyn’s classroom was akin to being a science and art workshop with enough structure to provide students with the security necessary to be creative. Sometimes

patterns were free at other times more formal.


Elwyn’s book provides a way through the current compliance environment (for both teachers and students) that the past decades have imposed. Many teachers will not be aware of alternatives and, for them, the first step would be to acquire his book In the Early World and be inspired by the creativity of Elwyn’s teaching and his student’s creativity.


A slow transformation into a creative community


Every classroom can be transformed into a learning community and slowly more and more choices given back to the student’s as teachers gain confidence and student’s independent working skills. Going too fast might be counterproductive and every teachers needs to design their
own progress. A good time to experiment might be at the end of the term when you will have the time in the holidays to reflect on how it went and what you might do next time. And it is good advice to work slowly towards developing a truly creative classroom by the end of the school year. In this way you will be imitating the trial and error process that underpinned Elwyn’s development as a teacher. With time teachers will move towards the satisfaction of this kind of teaching.

To write the above I have unashamedly made use of phrases from the introduction Elwyn’s book Inthe Early World – particularly the forewords to the original and the recent edition and the preface to Elwyn Richardson and the early world of creative education in New Zealand by Margaret McDonald (NZCER 2016). For those interested in the historical development of creative education in NZ I recommend the later. 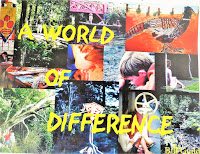 A group of teachers in Taranaki in the 70s developed ideas inspired by Elwyn’s writings and friendship. One teacher, Bill Guild, wrote a photo book of his student’s achievements A World of Difference a summary of is well worth a look. 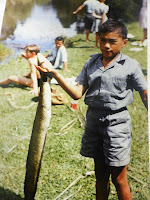 Posted by Bruce Hammonds at 1:27 pm