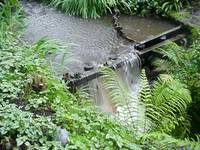 This small creek completely covered the dam a few minutes ago!

In a couple of days it will be New Year. Time to think about the future?

I have read a lot about a ‘Post Industrial Society’ but so far, if it does exist, it has not yet formed into a recognizable entity. The old 'Industrial Age' mind-set, like the dinosaurs before, them lumbers on, tinkering it's way into oblivion.

I also read that the Industrial Age was only named in hindsight after the machine technology had virtually transformed every aspect of life for good or bad. I guess the same will apply for the 'new age' we are entering. It may not take so long to coalesce as the information technology is far more powerful and immediate than anything ever experienced before.'

In the meantime we live in a half world blinded by consumerism in a me and you, ‘I’m all right Jack’, mentality. Politician’s world wide practice poll driven pragmatism which avoids real change for fear of losing votes and do their best to pretend they are in control.

It is pretty obvious that all institutions are in a state of perpetual crisis. Schools are failing, worldwide, approximately a third of their students – the simplistic answer naturally is more reading, writing and maths. The Justice system is no better and seems dedicated to locking up too many citizens. Health likewise is in always in trouble. In New Zealand a third of young children are said to live in poverty while at the same time we are rapidly moving to a society of older people. Mono-cultural, one color fits all, attitudes still rule. Add to this the environment under threat as we greedily fish, cut, dig and destroy whatever will make money for those in power.

All these systems with their genesis in the nineteenth century are failing.

We need to re-imagine the kind of world we want or we will get more of the same or things will just get worse.

Communism may have failed but Western winners and losers capitalism is no real long term answer. Democracy is also at risk – too many people no longer care enough to vote and leave things up to others.

Everything needs to be re-invented to suit a new age.

Globalization is unavoidable but it needs to be balanced by a renewed sense of community responsibility. The state ( our national politicians) needs to rethink it's role to one of creating the conditions to encourage diversity and creativity.

In the meantime tinkering with creaky systems seems to be the name of the game. It is a bit like Nero tinkering while Rome burns. It seems as society we are blinded by greed, consumerism, house prices, self satisfaction turning a blind eye to the growing list of problems.

Like the Emperor’s fine clothes we are blinded by own our own self satisfaction. There are voices pointing towards a different future but no one is listening. The majority, led by self preservation and reactionary editorials, seems to prefer to return to the good old days of the nineteen fifties.

If nothing else the disastrous tidal wave in Asia had shown that everything is connected and that, with focused intentions created by a terrible emergency, people can work together worldwide to solve problem for the good of those in need.

In Taranaki we are in the middle of a rain storm. If I had been as focused on thinking ahead to solve problems I could sort out, rather than thinking about things beyond my control, I would have cleaned out the guttering and the drains before the rain came! Like most other people my own action is only activated when an emergency strikes!

Posted by Bruce Hammonds at 2:43 pm