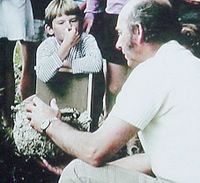 The serenity of magical teaching

When presenting to teachers I often ask if there are any beginning teachers in the audience? There usually are. I joke with them that their choice for the year is to ‘survive or die’ and that the key factor to survival is to be lucky enough to be in a school with a supportive leader.

For the more chronologically challenged I indicate that when they retire they also have two choices – to leave cynically or serene! Cynicism is understandable after coping with all the endless ‘top down’ fads and fashions, most of which disappear without trace only to reinvented in another decade! Those who leave serene though, in my experience, are the teachers who developed a strong belief system and only took from official developments what they wanted.

A friend of mine, Alan, sent me the following extract about teacher’s satisfaction and disenchantment in older teachers, from a book on teacher development:

So ‘tinkering’, together with an early concern for instructional efficiency…was one of the strongest predictors of ultimate satisfaction. Inversely heavy involvement in school-wide innovation was a fairly strong indicator of ‘disenchantment’ after 20 or 25 years of teaching. Tending to ones private garden, pedagogically speaking, seems to have more pay off in the long term than long term land reform, although the latter is perceived as stimulating and enriching, while it is happening.’

‘(Older teachers) ..warded off stagnation (not) by leaving the classroom but by drawing on what diversity there is – and there is plenty – within the bounds of classroom instruction’.

‘It had to do, simply, with the experience of achieving significant results in the classroom- with a long, almost magical string of years in which apathetic pupils came alive, classrooms buzzed with purposeful activity, relationships with pupils were intense, and performance levels were well above average’.

So it seems there is some truth in my anecdotes after all.

Central governments, and school leaders, have to work hard in the future to develop environments that really value teachers’ voices in school transformation – and to learn to share power, if teachers are to develop the necessary deep ownership required for lasting change.

Thanks Alan.
Posted by Bruce Hammonds at 11:57 am

Interesting, long may teachers have the freedom and initiative to 'tinker'.

It is very gratifying to conclude that the intrinsic job satisfaction of teaching seems to correlate so closely with the experiences of successful learning- as they should of course.

Having retired recently, the major satisfactions of doing the job reasonably well, and the pleasure and fascination of being directly involved in children’s learning remains. I also remain critical, not bitter, about the things that get in the road of this process.

Intrinsic motivation, for both teachers and learners, is the real driving force that makes learning and teaching fun.

Unfortunately a technocratic desire to prove everything results in learning being reduced to a number or a graph .

It has aways been a worry to me that the teaching profession has not been more critical of 'things that get in the way', or central demands for simplistic accountability.