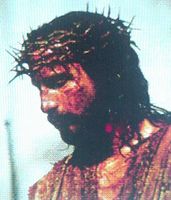 The Passion of Christ

I am not a religious person in the traditional sense but I have an admiration for the historical story of Jesus.

If we were to take away all the trapping and respectability that have been built around him since his death by the various churches, he was a revolutionary figure. Today many of the churches that have been established based on his story now represent elements of the traditional forces that Jesus in his day was so against.

I wonder today what Jesus would want to change; what unfairness and injustices would he ally himself with? He was never a person to be liked by those in power who control the lives of other people to suit their own material ends or ambitions. Who would be the poor, the sick and the persecuted today? Who would he be against?

Jesus was no respecter of proper channels, and his followers were a pretty mixed bunch. Today they would probably be all arrested for unruly behavior! Particularly if they were to criticize the unfairness of market forces and those who have acquired money, power and positions. These so called 'winners' seem to care little for those, who for whatever reasons, have little material wealth.

What I like about Jesus, and before him that other trouble maker Socrates, is that they did not believe in writing things down. They would make useless teachers today! Socrates believed in simply questioning everything and Jesus spread his messages through example, parables and stories, of which his follower had to make their own meanings. Both paid the price for their desire to change the world, both were punished by those in power, whose authority they were questioning, and both paid the ultimate price for their troubles.

Both had no choice. They both had to do what they believed in.

Today we need people with the same determination and integrity if we are to create a better world. Whatever we can’t leave it to the ‘secular priests’ who always know best what we want.

It is always the old democratic ‘bottom up’ freedom argument, against the ‘top down’ those who know always know best authorities. We know all about this in education – at any level – right down to each individual class. Who would want a Jesus or a Socrates in their class!

Today we desperately need people who lead with ideas rather than power or position; people who listen to the people. If anybody is willing they will have to be prepared to pay the price for their questioning, but it shouldn’t be as savage as what happened to Jesus.
Posted by Bruce Hammonds at 2:30 pm

I heard you once talk about Catholic priests, who were called 'Liberation Theologists', who defied the church to help people in need - seems we need them in education as well!
Reckon you do a pretty good job!
Take care!