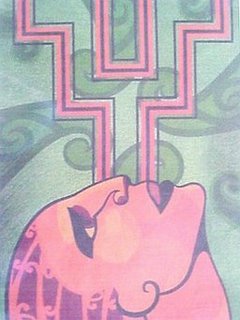 Time for some real questions and answers?

The tukutuku pattern 'poutama' is called the 'stairways to learning'. Too often schools are a pathway to failure.

The ‘official’, acting Chief Review Officer Mike Hollings, may well be right by pointing out that some primary schools fudge how well Maori students are achieving but to say that when Maori students get to year nine, these students fail because of poor teaching in primary school, is far too simplistic.

Holling's ‘argument’ is that if Maori students suddenly under perform at secondary school then it must be the fault of previous teaching. The answer, suggested by ERO, is for schools to introduce tests to measure and uncover poor performance and then to improve it.

The technocratic simplistic mindset of the last millennium lives on!

And of course opposition politicians jump on the bandwagon with calls for compulsory national testing. National testing is always a good vote winner – thank goodness it is not another ‘silly season’ election year.

Another well known conservative journalist (Frank Haden) added that primary schools should focus on numeracy and literacy and not waste time on the creative areas. What a barren and reactionary view of learning in an age of creativity and imagination; it is amazing that such dinosaur like view still gain attention.

Naturally a contrary view was expressed by the Primary Principals Federation president, who said, that testing would take time away from teaching – and he could have added, compounds the problem by narrowing the curriculum, as has happened in other countries.

The truth is, according to Lester Flockton (Otago University Educational Research Unit Director), that the identified lack of achievement is ‘grossly misleading’ as student achievement levels are improving in the primary area but are static at the secondary level.

You would have thought Hollings would have known about this? Flockton continued by saying, that children’s socio economic background was the strongest factor in educational achievement. This is the area politicians should focus on if they want to make a real difference but this would require them to take responsibity for ‘the fine mess we are in.’

The fact that 20% of our students leave our education system should surely make us question the system itself. Many Maori students achieve well in the right environments and we need to focus our energy on transforming our education system so as to develop such conditions for all students – and this transformation ought to include both primary and secondary levels.

Worldwide there is a loss of engagement of students at the year 9 and 10 level linked to low socio economic conditions, not ethnicity. Research in the UK (Cambridge University) indicates that 40% of students fail to make academic progress the year following the change to a secondary school. We have the same problem in NZ. Ministry of Education data indicates that suspensions and absenteeism increases dramatically in the early secondary years - and we know 20% of students leave secondary schooling with nothing to show for their time. As one 70s writer called his book, it is ‘Compulsory Mis-education.’

You would think that Mike Hollings would be better placing his energy in doing his best to transform our industrial aged mass education schools as it is the system that is so obviously failing.

There are no shortages of ideas to assist in this transformation but nothing will change until we all change our own ‘mindsets’ first. It would be great if such insight came from the top but Mike Hollings gives us little faith. The challenge of the future is to develop a personalized approach to learning to ensure all students leave formal schooling with ‘their reputation as learners intact’, their talents developed, and with a love of learning that will see them through whatever challenges life throws up at them.

Hollings could begin by reading the Ministry Of Education’s ‘Teachers Making a Difference’ for Maori Students – as should all school principals; or the Ministry’s ‘Best Practices’ findings. The former is the best thing I have read from the Ministry for ages but it was not all their own work!

As Russell Bishop says, ‘We’re risking turning out 40% of Maori students with no qualifications whatsoever. What we are risking in schools, and what we’re risking as a society, is too scary to contemplate.’

So let’s have some better thinking from ERO.

Perhaps they are part of the problem, but that is another story.
Posted by Bruce Hammonds at 11:36 am

Anything that takes initiative away from teachers is a problem - it is a form of intellectual sabotage. Being under pressure from too many masters causes stress and learnt helplessness.

One book I read calls this trying to comply to the ambiguous and relentless pressure from the centre (provided in the name of 'self management' and accountability) 'Corrosion Of Character'.

Always trying to guess what 'people' in authority want is stressful, and too many people lose track of their own core beliefs in the process.

It is amazing how authoritative people get when they are promoted to so called 'important' positions.The further away from the reality of a classroon the more important they think they sound.

They remind me of the old WW1 Generals whose orders to their young conscripts was to march into the enemies guns with fixed bayonets rather than run because they would only panic if they did.

As it turned out they all died! They would've been better off running.

There are no real 'experts' in Wellington.

Your comments as usual touch a raw nerve....which is great!
As a BOT member I have just come from our composite Yr 7-13 school Annual Prizegiving and it was so apparent that our 37% Maori roll were well represented in the awards received in years 7 and 8 with a dramatic decline from year 9 onwards. Anecdotal evidence at least backs up what you say. Perhaps Primary Teachers are at fault in some way, but I believe that the evidence will actually point to Secondary Teachers being the limiting factor in the success of our Maori students. I do not even believe that socio-economic factors will prove to be a factor. Take for example the children of refugee families; they excel in our schools because their parents demand of them a desire to learn. My observations point to apathy from parents and abysmal teaching strategies from our secondary teachers as the primary cause of failure in our schools, compounded of course by the inability of Ministry of Education staff in the curriculum and funding areas.

Thank you Bill for your comments. Your school ought to access the 'Teachers Making a Difference' video and booklet. Great Professional Development for your staff and BOT.

The booklet, although about Maori students, is equally applicable for all students. Check with the college of education in your area to access one.