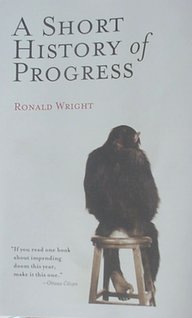 The myth of progress.

This book by Ronald Wright is one everyone should read.

After hearing the author discuss his ideas on National Radio (Canadian Massey Lectures) I was tempted to buy the book from Amazon; it was well worth it!

If you want the big picture about the history of human civilization, and a pessimist but realistic criticism of the myth that technological progress will solve our current problems, this is the book for you.

It is a mind changing read. Wright is a respected historical philosopher with an easy writing style with ‘a profound understanding of other cultures’.

His book is written around the three questions artist Paul Gauguin expressed in one his last major paintings: ‘Where do we come from? What are we? And where do we go from here?’ Gauguin, after fleeing from a depressing European industrial society, was in the end disenchanted himself with the ideal society he believed existed in the South Pacific.

But the questions he asked, Wright believes, are even more valid today. Where are we going is the key question and Wright believes the answers lies in the history of previous, now crumbled, civilizations. And he believes we will suffer the same fate unless we learn lessons from the past; he not hopeful.

History, as the cliché goes, repeats itself and each time with greater destructive impact. With our blind faith in progress ‘we’ believe thus will not happen to us. In earlier days a civilization could collapse without impacting greatly on other cultures. Today if Western civilization were to collapses the fate of humankind would be at risk. The planet will continue to evolve with us!

The problem is what Wright calls the ‘progress trap’ which, as a result of technological advances, cultures eventually consume all their resource and literally fall apart – victims of their own success.

Advanced technology, from the earliest days, is a double edged sword enabling man to grow and consume more than can be supported; that growth creates its own problems. Today resources are being consumed in a way, and technology so powerful, that there is a very real possibility that the 10000 year experiment of civilization could come to and end. ‘We are clever devils’, Wright quotes, ‘but seldom wise’.

Sustaining the world’s resources is the vital issue of the future. Wright believes we now have the means to share world resources wisely, to clean up pollution, to provide better health for all, and most importantly to set economic limits in line with natural ones.

This is he believes, ‘our last chance to get it right.’ But he is not altogether optimistic as we seem to have learnt little from the lessons of the past. He quotes that Hitler once gleefully exclaimed, ‘What luck for rulers that people do not think’ and Wright adds, ‘What can we do when rulers will not think’?

The current materialistic ‘Market Forces’ mentality is destroying the resources of the world and, as Wright explains in his book, every empire finally fails because it despoiled its environment. The simplest and clearest example of this, he writes about, is Easter Island where, in the process of erecting monumental carvings, they felled all their trees. Easter Island is an isolated metaphor for the price cultures pay for ‘progress’. With our advanced technology and greed , and our false hope that progress will solve all our current problems, all the worlds civilizations are now at risk.

There is hope, Wright says, but only if: we change our minds about the myth of progress; learn from the failures of earlier civilizations; and learn to protect the environment that sustains us. He writes that it is up to us develop a sustainability consciousnesses about our world so as ‘to shape it and look after it’.

Developing this consciousness ought to be the vital role of our education system?

A powerful read.
Posted by Bruce Hammonds at 1:58 pm

It is always easier to keep getting better at a bad job rather than having to face up to the hassle involved in starting new ideas badly. 'If something is worth doing it is worth doing badly' ( G K Chesterton).

Secondary schools are a good example of getting better at a bad game - just too much trouble to change even if they wanted to!

They believe in progress but not new thinking.

Wright is really talking about facing up to the 'big picture' - as was Bill Clinton in his talk at Auckland today about the oil crisis. I guess things only change when it is too late - the message of Wright's book?

Ronald Wright's book was central to a discussion held with Professor Peter Lloyd of Napier on National radio today.

Lloyd focused on the crisis that will emerge when oil resources run out ( oil has, or is about to, 'peak'). The other two problem he discussed were climatic change and world over-population.

Our problem, he believes is what he called 'collective amnesia', quoting Wright's book, which illustrated how early societies became victims of their own success, collapsing when their resources were despoiled.

Like Wright he is not optimistic about the future.

Our society is falling apart (todays news - 'more young people causing more violent crimes') but we choose to deny the seriousness of it - like Nero we prefer to fiddle while Rome burns and just build more prisons. How long before we have some serious talking about causes of problems and think of some real solutions rather than attacking the symptoms. Celia Lashlie is one realist who understands that these are young people alienated from their own society.

As ever we are to trapped by our individual and collective self interest to see futher than our noses - or pockets.

As always you make some good points Bruce. But isn't technological advancement essential to ensure that in time human civilization can seek out new and exciting planets. Like the saying goes 'nothing lasts forever!' Might seem very Star Trekish but hopefully some of our future generations will advance themselves to this level or we are all doomed.

Thanks for the commment 'aim2know' ( I enjoyed visiting your site to see your paintings! - almost as good as seeing them in real life!)

We seem to have blind faith that technology will 'save us' but I wouldn't bet on it this time! See if you can get the book I mention and give it a read.

It is not technology that is the problem but the wisdom to use it for sustainability. Wisdom is cheaper than searching for new worlds to mess up!