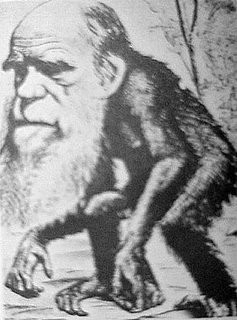 Charles Darwin is one individual that changed how we think about ourselves forever.

He hardly had an auspicious start in life which is reassuring for those who have yet to discover their destiny. Darwin however might not agree with the idea of destiny!

Having achieved little of note he joined the crew of the 'H M S 'Beagle' in his late twenties. During this journey he put together his thoughts that were later to be published as the ‘Origins of the Species.’ While other scientists were busy collecting and classifying things Darwin was more concerned with relationship between animals he observed and earlier forms.

What he worked out, based on his observation, has forever changed how we see human life. Up until this point the world was believed to have unfolded according to God’s plan but Darwin reduced mankind to just another successful species evolving from earlier ape like forms – and even more worrying that mankind was just another species that would continue to evolve by chance and mutation.

The thought of an accidental evolution, separate from all an guiding and powerful god, worried Darwin as well and he was reluctant to publish his findings for fear of ridicule. He finally published his seminal book before another naturalist (Wallace) published similar thoughts.

If you believed in Darwin’s theory then you had to believe that mankind (particularly Europeans) had no superior God given rights. To this day there are those who refuse to accept such ideas. Many American Schools have been forced to include in their 'science' teaching a pre –Darwinian alternative theory called ‘Intelligent Design’.

And as well, if you believe in Darwin, mankind does not have a guaranteed future having only been around a mere 10000 years – a mere blink in the history of our planet. Dinosaurs lasted longer!

Mankind is currently doing a great job of despoiling the resources of the planet we live on. Part of the myth of western civilization is a belief that progress will solve all problems. Today some believe in what is often called ‘social Darwinism, the rule of ‘tooth an claw’, based on survival of the fittest. Darwin’s theory favoured survival of the adaptable and the flexible, not the biggest and greediest. Successful species often arise from odd but successful mutants; strange, small, hairy manuals eventfully replaced the dinosaurs and some evolved into early humans.

Mankind has no guarantee of survival but the world will continue to evolve with or without them.This is Darwin's legacy.

We have the power to destroy the resources of the world and today this is a real possibility. As Thomas Huxley wrote many years ago ‘Where is the man that has so much that he is out of danger?’

A belief in progress may be our final undoing unless we develop new ecological mindsets to match Darwin’s insights. We have a lot to learn from the indigenous cultures that have learnt, through experience, to live in harmony with their environments.

New sustainability orientated mindsets will be needed; transformed schools based on developing such future focused students could be the solution.

So far it has been too much hoping for the best and not enough facing up to the worst.

We are running out of time.

A great site to study Darwin
Posted by Bruce Hammonds at 5:13 pm

Dinosaurs still rule education but creative kids are escaping into a new world beyond their teachers jaded imaginations.!

Traditional schools are still powerful dinosaurs oblivious to the oncoming meteor! And so far there are few true alternatives.

Schooling has taken the place of religion in our secular age - those on high decide who shall gain entry into the materialistic world.

Education ought to be about creating the condition to allow the talents of students ( and teachers) to evolve.

Darwin would be amused by our secondary schools frozen in a late Victorian Age - stumbling blindingly on to their inevitable fate like the dinosaurs before them.

Couldn't agree more with all the comments.