Bring back the Jesters! 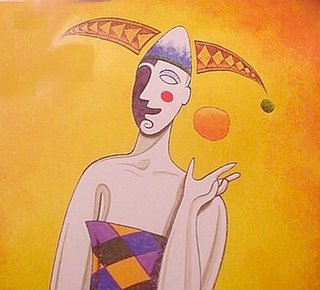 The idea was that the ‘official’ jester might actually play an important part in the company, just as mediaeval precursors had done in royal courts.

Modern boards of directors are a bit like mediaeval courts where no one questions the king or the senior courtiers because they have become far too important to challenge. And as long as they can’t possibly be wrong, they can continue doing the wrong things all the time and never know it.

The idea is worth spreading throughout all organizations to combat the blindness created by past success. It is one way to counteract the conformity which pervades top down management. Telling the truth is difficult in too many environments and as a result organizations fail to adapt to changing environments. As Oscar Wilde wrote, ‘Telling the truth makes you unpopular at the club’.

An official Jester is one way to counteract this conformist thinking which inhibits open creative thinking. I guess making use of de Bono’s seven hats is another way.

The jester at British Airways serves a serious role, as in medieval times, as a mouthpiece for unorthodox criticism couched as harmful jests. The corporate jester is not part of the reporting structure and can question management without fear of repercussion.

At the very least organizations need to have a ‘critical friend’ who is prepared to provide advice for organizations to think about and action only if it makes sense to them.

Hearing the truth might hurt temporarily but it is preferable to blindly heading down the wrong path towards oblivion.

Leadership and learning are both about listening.

Each one will show you a different perspective
Posted by Bruce Hammonds at 12:27 pm

All schools need to have their own jesters - people they can listen to and then make up their own minds whether to act or not. Advice is only advice if you can turn it down!

Schools are now self managed but look more alike than ever! Having to comply to endless Ministry requirements, and being 'reviewed' by ERO to see thay are 'on track', has limited their individuality and creativity. The Ministry has created a 'low trust' conformist environment. Hardly the environment we need for future survival.

The Ministry needs some jesters urgently to confront their mindless technocrats.