The 'new' or 'revised' NZ Curriculum? 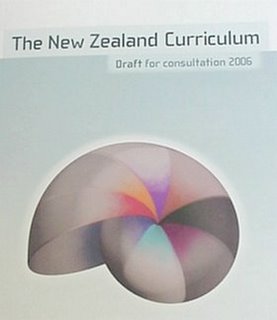 I was at a meeting recently when a Ministry ‘contracted’ employee pulled me up for giving credit to the ‘new’ NZ curriculum. She objected to my use of the word ‘new’ - ‘revised’, she informed me, is the correct title!

The ‘new’ or ‘revised’ curriculum has moved along way from the appalling 1992 NZ Curriculum Framework ( NZCF). The further away the better. A ‘senior’ Ministry Curriculum ‘Manager’ said recently on National radio that the original curriculum was 'good' but the ‘revised’ one is better. A real understatement – there is a world of difference. We are now back to where we should have been before politicians introduced the 92 model with little or no consultation with educationalists.

For over a decade schools have struggled to implement a document that had little to do with education and more to do with an imposed ideology of efficiency, accountability and competition. Supposedly to clarify what schools ought to ‘deliver’ it soon became obvious that it was so incoherent and complicated that it became itself a barrier to the very problems it was supposed to solve. But not before a number of creative teachers and schools had paid the price – either by trying to implement the impossible or by trying to hold on to their educational principles. In most cases professional integrity was compromised as most schools tried to do their best to ‘colonize’ the continually changing compliance expectations.

Not that original NZCF was ever ‘original’. An exchange UK lecturer at Massey College of Education (when I was their ‘Teaching Fellow’) showed us a copy of the earlier published UK National Curriculum. It was dark blue with a shell on the cover (a spiny murex) while ours was a lighter blue with a nautilus shell on the cover! On closer inspection the saving grace for the NZ version was that ‘we; had avoided national testing at ‘key stages’ and the associated league tables based on them. While working with the Bali International School I realize that the curriculum documents from the various countries or states all followed the same technocratic formula – learning areas, strands, levels and countless learning objectives, all to be taught and assessed. The insertion of a few Maori words could not disguise the lack of originality of ‘our’ curriculum statements. Since then the Ministry’s policy advisers have led us down several other UK ideas – numeracy and literacy initiatives, targets, and strategy planning. We even followed their ‘slim-lining’ of their ‘obese’ curriculums with our ‘stocktaking’ version.

So there is nothing original about the Ministry – a classic case of ‘group thinking’ leading to a false sense of consensus while all the time ignoring the ‘wisdom’ of the teaching profession.

As it became obvious to all that the ‘Emperor had no clothes’ a revision of the National Educational Guidelines (the NAGs), and then the NZCF was inevitable.

And along with this a softening of the hard line ‘name and shame’ of our Education Review Office (another UK idea) into an ‘assess and assist’ model.

The metamorphosis of the original ideology, with the publication of the ‘revised’ NZ Curriculum, is now almost complete.

Of course no one will admit that they were wrong in the first place but at least common sense seems to have prevailed even if those whose memories stretch back before the 90s will have feelings of ‘deju vu’.

Back to the ‘revised’ NZ Curriculum.

I don’t think it will evoke any great excitement, more a sense of collective relief. It legitimizes an approach that many innovative schools have already taken and for such schools it is a welcome ‘catch up’ document.

It reverses the order of the original curriculum. It begins with vision, principles, values, key competences (a ‘new’ version of essential skills), highly reduced learning areas (sending to the ‘shredder’ the eight separate curriculum statements), and finishes with effective pedagogy (a word ‘revived’ from an earlier era), designing school curriculums and planning and assessment. An ‘appendix’ is a remnant of the previous earlier incoherent learning objectives.

No argument about the vision, values and principles. The freedom of the ‘revised’ document for schools and their communities to set their own programmes, within national guidelines, is a welcome return to democratic ideals. ‘Key competencies’ are the new ‘buzz words’ but are little more than a reframing of the ‘learning how to learn and relate to people’ of earlier progressive educationalists such as John Dewey. The ‘key competencies' phrase comes from an OECD report and seems to relate more to the technocratic past than a creative future.

The current Learning Area Frameworks have been reduced to a pull out appendix for each area. And we now thankfully ‘design’ rather than ‘deliver’ a curriculum to the students. This is an important change in terminology and ideology.

There must have been some considerable discussion about ‘effective pedagogy’ as this page has changed the most from an earlier March 06 draft. I seem to feel a strong emphasis on ‘constructivist’ teaching has been lost in the process and if so this would be a shame.

What appalls me most of all is that ‘they’ have removed a phrase from the March draft – ‘encouraging a love of learning’. This phrase, to me, symbolized most dramatically the change of ideology from the previous technocratic NZCF.

If there are ‘fishhooks’ hidden in the ‘revised’ it is in the planning and assessing of learning outcomes. ‘Effective based teaching’ is the new Ministry mantra! How this is to be interpreted is open to question. The learning objectives ‘appendixes’ could have been even more reduced by defining the ‘foundation skills’ even further and leaving the learning area objectives open to greater teacher creativity. Appendixes are all too often unnecessary organs.

A requirement to assess students’ progress on ‘key competencies’ would seem problematic; such learning dispositions ( including the missing ‘love of learning’) are not easily measured and are best seen through student actions.

All in all, ‘new’ or revised’, the draft curriculum is a ‘giant step forward’ for the teaching profession. Schools will now have to ‘shred’ all those compliance documents that have kept them away from focusing on teaching and learning!

At last it is about teaching and about time!

What is missing is a real focus on developing the talents, passions and dreams of all students. Key competencies by themselves do not make a learner. Love of learning come from exploring things of interest – we all get better at what we get good at.

Developing students’ talents means more to me than helping all ‘young people reach their potential and developing the competencies they will need’. It seems to place the cart before the horse.

And where is the mention of personalizing learning that our Minister believes is the most radical change in education since the introduction of mass education of the 30s?

Let’s hope it makes the final document.
Posted by Bruce Hammonds at 3:28 pm

Dear Bruce,
The sense of collective relief is definitely out here. The curriculum offers schools who want to be curriculum leaders a huge opportunity. For those who want to do ‘same old’ they are missing out on what can be a spectacular change for their pupils and teachers. Staff now need time to soak the document up and go through the ‘dreams then themes’ stage. Staff need to sort their curriculum contexts into the ‘need to know, the nice to know and the who cares piles. By developing an authentic curriculum the challenge then is to focus on authentic assessment and cut the crap out. We have already benchmarked the Core Competencies for Year 1 to 8 pupils and are working on self assessment Rubrics (e.g. Self Management we have called “being an On-Task Learner”) that will feed into a school picture for reports to the BOT.
We have been working on this style of curriculum for a while now and children and teachers love it.
One of the fishhooks Bruce is learning a new language in an already crowded curric. Also what’s the story with Technology objectives not being in there? Is this a good or a bad sign?

Keep up the great work Bruce

Great to hear from you again amber-lee. Coudn't agree more with your comments.Schools now have a great opportunity to realize their own dreams - rather thah interpret other peoples nightmares!

Have you seen the social sciences objectives for level one - better if they had left them out.They are the same for all levels - lazy thinking?

I agree with your blog and the comments - the weakest part of the 'revised' NZC are the 'add ons' at the end. Need both greater focus in basic literacies and freeing up in the remaining learning areas..

Yes Bruce this is a wonderful opportunity for schools to actually involve their kids in the learning process.I trust there are enough principals out there who can leave the check box era and move their schools into learning communities.

Lets hope you are right!

So you worked out how to post comments - easy when you know how!

There wasn't so much wrong with the 'old' NZCF - it was all the overly complicated curriculum statements and assessment demands that went with it.

We will need to watch carefully to see that silly requirements do not ruin the intent of the 'revised' curriculum.

The 'fishhooks' lie hidden in the 'pull out' pages.

That the 'techno-rats' have removed 'love of learning', included in an earlier draft, says it all. Creeps!