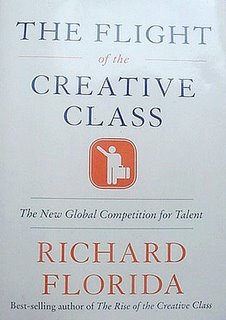 Richard Florida was the author of the groundbreaking ‘The Rise of the Creative Class’ makes it clear in his latest book that we are entering, what he calls ,the beginning of the 'Creative Era' – an era based on the need to develop the talent and imagination of all citizens. Roughly a quarter of all new jobs are in, what he calls, the 'creative industries' and the country that can realize and harness the talent of all it’s citizens, or attract others from anywhere in the world, will take the lead in the next century.

His new book begins by talking about how Peter Jackson attracted a diverse range of creative talents to Wellington, New Zealand, to create the ‘Lord of the Rings’ trilogy. The point Florida is making to Americans is that the films were not produced in Hollywood and that there is now a global competition for talent.

And, he writes, it is not good enough to develop the 30% of creative people – all people must be helped to develop creative dimension to their jobs otherwise we will create a class divide that will have consequences for us all.

Future success for any country will depend on 'mining' the creative capital of its citizens and education systems will have to be transformed to focus on developing the talents and love of learning of all its students. Every human being needs to be seen as creative and we need to value creativity above all else.

How can we attract creative people to our cities as Peter Jackson has done? Creativity is not driven by greed but by challenge and opportunity. The opportunity to apply imagination is the key to future success.

Schools hold a central place to develop the talent of all students required for a creative era and although America once was the creative centre of the West its past success has created complacency, and the effects of closing immigration and declining tolerance following 9/11 no longer guarantees its place at centre stage as talent finds new more accommodating, open, tolerant environments to gravitate to as Peter Jackson has shown.

The 'creative age 'focuses on cities rather than countries, Florida writes, with some cities becoming more ‘attractive’ than others. Cities that develop ways and means to educate attract and house creative people are wining the talent wars.

As mentioned schools will need to be transformed to develop the creativity of all students and not just the current 30% - currently no country has developed such a system. Most are still stuck in an industrialized ‘mindset’, all too often counter productive to realizing creativity of even its so called successful students. Student are being educated for a world that no longer exists.

1 Tap the full creative capabilities of everyone

2 Invest in creative infrastructure which means investing in creative education faculties for all students. Human creativity is the new capital.

4 Educate all people for a creative age – to develop creativity in whatever occupation they choose. Our future depends on smart creative kids.

5 Develop the competitive ‘attractiveness’ of our cities to draw in creative talent.

6 Develop a truly open, welcoming, secure and tolerant society that values the difference and diversity of a range of people.

7 Attract creative people from around the world.

Countries that will thrive in such an era will be open, caring, risk taking environments ,valuing entrepreneurship and experimentation.

New Zealand is well placed to take advantage of these ideas with the right leadership. We need more than a new creative class (this will only create class division) we need to create an inclusive creative country.

The creative era requires, writes Richard Florida, nothing more than a change of world view.’ Creativity’, he writes, ‘is not a tangible asset… we must think of creativity as a common good like liberty or security. It is something essential that belongs to all of us and must be always be nourished, renewed, and maintained – or it will slip away’
Posted by Bruce Hammonds at 4:43 pm

Would be wonderful if NZ were to become known as the creative country as well as environmentally aware.

What we need is for a collection of creative people to get together to design a school system to develop the creativity and talents of all students. We could start with Peter Jackson! The tecbnocrats have had their turn - their age of conformity, standardization and control is over.

Attracting, developing and keeping talent - and making full use of whatever talent an organistion can attract, is the future. This is the 'mindset' of the creative era! The new 'capital' is not raw material, or money, but between the ears!