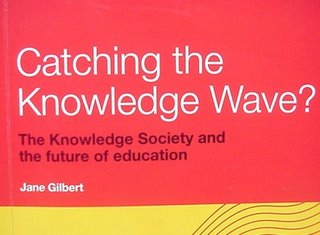 My most valuable learning experience this year was being able to listen to Jane Gilbert present at a Auckland school cluster group that met on Waiheke Island earlier this term.

I had been asked, along with Jane , to present my ideas about how to ensure students achieve quality in depth learning.The organiser of the cluster group had had a term off to investigate the use of ICT in primary schools but during his research had come to the conclusion that there was a lack of in-depth content study work to be seen - and,as well, ICT was not being used to the degree he had thought it might be.

I guess Jane and I come from different ends of the education spectrum - Jane is the chief researcher at the New Zealand Council for Education Research (NZCER) and I , in contrast, could at best be called a 'rugged amateur ' with a long experience in primary schools. It was reassuring however to find that our 'messages', or 'stories', were so complimentary. My 'message' was simple - teachers should select studies to extend students talents, value their creativity and to do fewer things well. Jane, in contrast, had spent several months researching the 'know edge wave ' concept and its application to education.

In Jane's well researched opinion the 'knowledge wave' has yet to hit schools with real force and when it does it will, like a tsunami, change the educational landscape forever. Schools , currently locked into an 19thC 'industrial aged mindset', focusing on ensuring students memorize content, will have to transform themselves into 21stC 'learning organisations' where students are able to create their own knowledge through action.

For primary schools the challenge will be to escape from being dominated by the 'Victorian' literacy and numeracy focus ( important but not enough) and a philosophy that says it is all about process rather than knowledge. Secondary schools , in contrast, will have to add 'process' to their approach to allow their students to create their own learning, making use of specialist knowledge as required. Jane sees knowledge not as a noun, or 'stuff to memorize and for teachers to transmit, but as a 'verb' - a process allowing each student to personalize learning.

If schools were to take her work seriously - and they should - they would transform themselves into 21stCorganisations ensuring that all students have their talents and passions developed. And, more importantly, schools would become centres of society transformation , contributing to New Zealand becoming a centre of innovation and creativity.

The other alternative is to for schools to become sidelined as students vote with their feet ( or rather with their web connected minds) to do their learning elsewhere.

The creative ones, Jane writes, already have.

All this is in line with the new thought behind the new draft NZ Curriculum. The centrality of the 'key competencies', in this document, and seeing students as active creators of their own knowledge - if understood properly, is about transforming schools as we know them. It certainly isn't just a bit of 'tinkering, or fine tuning' , that many schools I visit seem to think it is.

As I say - 'a must read book' if 'we' don't want to be washed over and lost in the knowledge wave.

I would suggest every educator ought to acquire Jane's book for holiday reading. Her book if it were a film , it says on the back cover, it would rate a 'M' with a 'caution that some readers may be disturbed by some scenes'.

I am re-reading mine!
Posted by Bruce Hammonds at 7:08 am

I think Jane and yourself are right. Teachers can only do so much and the emphasis today is on: literacy and numeracy, 'targets' ,collecting data ( 'evidence based teaching'), and teaching to pre -imagined criteria that litte time and energy is left for the fun of in depth content investigations - particularly those involving original research by both teachers and students.

The fun part of teaching - learning with the students - has gone.

Although I appreciate the need to develop in students 'key competencies' ( couldn't they think of a less mechanistic 2oth C phrase?) rather than than wasting time assessing each competency they ought to be integrated into, and assessed by, the quality of the task completed, individually or more often with others.

If this is not done creative teaching will be at risk!

The key competencies will only be important if they are integral to whatever current study/problem/issue the individual, group, or class is studying.

I can see a lot of energy being diverted from realistic studies into areas of assessing competencies.

This would be putting the cart before the horse!

To many teachers are just to busy to read such enlightened ideas - they cannot see the wood for the trees!