About learning from John Cleese 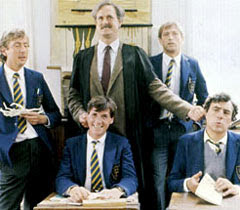 
John Cleese once spent ten enjoyable years, earlier in his life, as a history teacher but he says , 'today's educational trends which focus on specific metrics of accountability, represents a fundamental change in mindsets that demands some pretty outstanding creativity on the teachers part.'

Cleese writes that he has been interested in what makes people creative for over forty years. His first discovery about creativity was when he went to bed with a problem unsolved he would find that in the morning the solution had mysteriously arrived and, often, he couldn't remember what the problem had been in the first place. He thought this was, 'very strange.'

He then came upon research in the 30s about what makes people creative by Donald McKinnon, from Berkeley University, which found that most creative people had two characteristics . The first was a great facility for play.They would play with problems out of real curiosity not because they had to. And the second characteristic was they were prepared to ponder longer before resolving it. The more creative people had a 'childish capacity' to become timelessly absorbed in play when they were intrigued.

Cleese found this fascinating but counter intuitive as, he says, our current ethos dictates that the only real kind of thinking is quick, logical and purposeful. Any other kind being seen as sloppy, amateur, self indulgent and wasting time.

Cleese agrees that there is a time to do things quickly but feels hurrying has become a mind set. The assumption that the kind of thinking we should be using all the time is fast, purposeful, logical, computer type thinking is, in his, words, 'poppycock'

'We don't know where we get our ideas from', he writes, 'but it certainly isn't from our laptops.They just pop out of our heads somehow, from out of the blue.'

Cleese believes we all know this slower thinking works but we don't quite trust it so he was, 'overjoyed' to find a book 'Hare Brain, Tortoise Mind' by academic psychologist Guy Claxton. Claxton use the phrase 'hare brain' to to refer to the deliberate conscious thinking we do when we apply reason and logic to known data.'Tortoise mind', on the other hand, is more playful, leisurely, even dreamy. We ponder a problem rather than earnestly trying to solve it, by bearing it in mind as we watch the world go by.

Why Cleese asks, 'has the tortoise brain become neglected?' One reason he continues, is because the hare brain is articulate.It can explain itself because it is consciously aware of is own capacity. It can show the working as in a maths problem. The 'hare brain' can always justify itself.

Cleese believes we ought not to distrust the 'tortoise mind' because simply because it is not articulate, 'we must be willing to give it time to find ways to express itself before we let our articulate hare brain in to analyze it'.

He concludes by saying, 'when we are stuck, when we see we're just digging the same hole deeper, that's when we need to use our tortoise mind.I promise you, it will aways produce new ideas.'

Makes sense to me.

We can't measure or rationalize everything - certainly not the really important things. I have always believed that education is far to important to take seriously. Lets have some serious fun for a change.
Posted by Bruce Hammonds at 10:04 am

Wow! John Cleese was a history teacher! Wouldn't you love to be in his class, I know I would. This year I have been given time to step back from teaching and do some research as an Efellow in NZ. Something that keeps occurring to me, is that I now have the time to fully form a thought. I have the time to indulge my wonderings. Isn't this what we should be providing for our students too? When will we ever learn the lesson that less is more?
We keep losing good people from this profession, we lost John Cleese! Let's give creative people the time to be creative and therefore the time to help their students be creative too.

Greetings Jane. Thanks for taking the time to make a comment. Really appreciated.

Enjoy your time of reflection away from the 'pressure' of the classroom. I don't mean the natural pressure working to help your students make sense of their world and, in the process, developing their talents and curiosity, but pressure placed on schools by, what Cleese calls, 'the specific metrics of accountability'. Scroll back on my blogs and read my blog on 'accountabalism' - same idea.

And you are right , students do need to do less better - to do fewer things in depth. Too much skimming the surface of things ( not helped by students relying on information too easily downloaded off the net).

Creativity needs space from this obsession of narrow accountability and superficial learning. Compliance and creativity do not go hand in hand - it is one or the other.

I guess you belong to Edutopia www.edutopia.org ( where I found the Cleese article)? Perhaps, if you have time, the book 'The Triumph of the Airheads' might be worth a read. Haven't read it myself (yet) but have just listened to an interview with the author on National Radio.

This is what you can do when you have time!

I think you are right Jane. Rather than trying to develop fail-safe , or 'teacher proof' solutions, those who determine the direction of education should focus on finding, and sharing, the ideas of creative teachers. And then to think hard about the conditions required to encourage such teachers. Creative teachers are still around - just waiting for the right time to be fully appreciated.