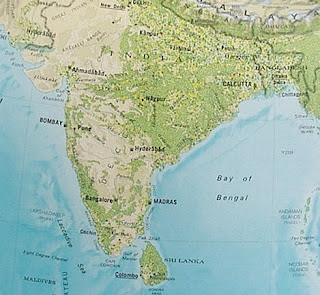 India - a country on the move.

India, writes Richard Hanzella ( President of the ascd) is a democratic country on the move (only China is growing faster). India is becoming an economic force to be reckoned with.

India, he says, may be a messy chaotic country but it is progressing on all fronts including education. Education is being seen as a way of developing an India with one 'voice'.

Rather than worrying about test scores and achievement data as in the West ( and NZ) Indian educators are most concerned with developing students who are able to face future challenges as active learners says Hanzella. India has a National Curriculum with interesting guiding principles : the need to connect knowledge to life outside school; an avoidance of rote methods; enriching curriculum challenges rather than textbooks; and nurturing an over-riding identity informed by caring concern within the democratic policy of the country.

The Indian framework is all about enhancing children's natural desire and strategies to learn. It is all about meaningful and inclusive learning respecting each learner, including a strong emphasis on the arts at all stages as an important way to build a sense of one's self.

Social justice and equality are seen as vital as is the ability to respond to new situations in a flexible and creative manner with predispositions towards participation in democratic processes.

I may look an impossible ask but, according to Hanzella, the Indian will is strong and the spirit engaged. He saw in all the diverse schools he visited similar goals being articulated.

He concludes by stating the Western emphasis on testing and achievement competence is taking us away from basic needs of learners. India's emphasis on learning, Hanzell writes, can encourage us all.

'When I was a child I had the freedom to make my own toys out of trifles and create my own games from imagination...One day in this paradise of our childhood, entered a temptation from the market world of the adult. A toy bought from an English shop was given to one of our companions; it was perfect, big and wonderfully life like. He became proud of his toy and less mindful of the game; he kept that expensive thing carefully away from us, glorying in his exclusive possession of it, feeling superior to his playmates whose toys were cheap....One thing he failed to realize in his excitement ....that this temptation obscured something a great deal more perfect than his toy, the revelation of the perfect child. The toy merely expressed his wealth, but not the child's creative spirit, not the child's generous joy in his play, his open invitation to all who were his companions to his play-world.'

Is this what we are missing in New Zealand - the joy of learning with others for its own sake? Of the importance of imagination and creativity - all impossible to measure but easy to see.

Perhaps the new 'buzz phrase' of 'personalising' learning will put us, in the materialistic West, back on the right track?

Posted by Bruce Hammonds at 2:01 pm

You do not expect the 'audit culture' minds of the Education Review Office to comprehend Tagore? And, as for the Ministry of Education, they are still trying to escape from a faulty technocratic curriculum of their own making to understand something as simple as encouraging imagination and a joy of learning! And, as for most school principals, they are so busy complying to imposed demands that they cannot see out of the box they have been trapped in.

What we need is a shift from gaining fragmented achievement qualifications to one of developing students' diverse talents. As we enter an age of creativity talent will be the only 'capital' that will count. Talent seems to have little to do with school achievement. The trouble is narrow achievement is measureable but imagination and talent can only be seen by what students can do - more an act of faith. Ask Peter Jackson.