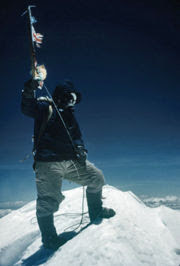 A State funeral was held today to celebrate the life and achievements of Sir Edmund Hillary.As one commentator said, it was not what Sir Ed would've wanted but it was what he deserved.

Sir Edmond's life represented what a person with a real enthusiasm, or passion, can achieve if ones mind it put to it. Discovering and amplifying such passions and talents ought to be the focus of any education system.

Unfortunately it is not as the focus on academic success almost blinds us celebrating any other form of human achievement.

Most of our talented citizens, those who make the new trails in any endeavour, all to often have less than fond memories of their secondary schooling. Many, of course, achieve their success in spite of a school experiences which neglected their natural interests but far to many do not with disastrous social consequences.

No country, especially one as small as New Zealand, can afford to sacrifice any of its human talent on the traditional alter of academic achievement.

Sir Edmund, in his own words, struggled at Auckland Grammar and gained very average marks. One of his physical education teachers despaired of him saying Hilary would not amount to much in his particular area!

Schools, to be fair, have never been good at spotting talent in their students other than in traditional conformist subject areas, and, possibly, rugby. Talent spotting is not their focus as their reputations depend on showing success in narrow academic fields.

Nothing wrong with this as long as an equal emphasis were to be placed on all the various forms of endeavour - the multiple intelligences, for example, of Howard Gardner.

And, even then, they must be careful not to pass premature judgement about their students' future success as was the case of Hillary's physical education teacher.

Hillary represented attributes just as important for future success as good exam marks. As he wrote, 'I was just an enthusiastic mountaineer with modest abilities who was willing to work hard and had the necessary imagination and determination.'

And, more than that, he had an empathy for others unusual in this current 'me first' world. Equally importantly he was able to express this empathy by helping others while still preserving the dignity of those being helped. 'I have never tried to impose projects on people...we responded ( to the expressed needs of the local people'). A lesson here for educationalists, politicians and bureaucrats, who always presume to know better.

Students' interests and talents should determine their educational and life pathways.

As Sir Edmund also wrote, 'It is not hard to find a man who will adventure for the sake of dream or one who who will search for the pleasure of searching and not for what he may find.'

Education ought to be about helping every learner find their own dream, no matter how small, and then to set about help them develop the skills and confidence to 'give it a go'.

Sir Edmund forgave good attempts that failed as part of the learning process - as long as what was learnt was made use of next time. He was a meticulous planner who quickly changed his plans as circumstances demanded.

He had a reputation, one of his friends said, that was, 'based on decency, kindness and a stylish simplicity' . And, as an adventure and trail blazer, one distrustful of unnecessary red tape or protocol.

I could think of no better memorial to Sir Ed than to gather partisan men and woman of similar directness, common sense and integrity to get together and to map out ( responding to peoples concerns as did Sir Edmund) future directions for our country.

What are the challenges we face as a country? The task is far too important to leave to political parties and big business.

We all need to be involved so as to build on the example Sir Edmund has left us.
Posted by Bruce Hammonds at 3:28 pm

What a creative response to Sir Ed Hillary's death.

I heard one woman being interviewd today saying, 'Ed Hillary was the dumbest in my primary class but he turned out to be the most famous'. She represents the view that school success somehow equals life success.

Nothing could be further than the truth!

Who are currenty seen as successful is still biased towards academic school success. Success ought to be widened to cater for the full range of human intelligences.