The power of the creative spirit. 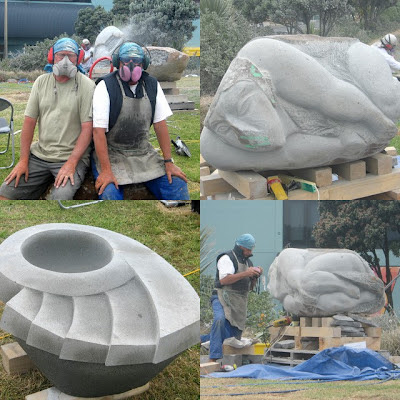 Two artists,one once a teacher now a full time artist, the other a teacher being creative during his vacation.

Every second year Te Kupenga invite artists to take part in a stone carving symposium along the waterfront of our city.

Over a period of two weeks each artist completes a couple or more pieces of work which are later auctioned.

I am always impressed with the creativity of all involved. The local volcanic andesite stone is very hard and it takes considerable effort, let alone artistic skill, to finally realise whatever each artist eventually creates.

Some artists, no doubt, have a fair idea of what they hope to achieve before they start while others work more intuitively; working in partnership with the stone to let the carving evolve.

If only creativity was the theme underpinning our society we could be more hopeful of developing a sustainable future.

It would seem obvious that if we want to develop the world as a more sustainable and fairer place then what we do need is creative thinking and to achieve this we need to focus on developing the creative talents in every person. Understanding the creative process and valuing the power of imagination would be, at the very least, needed by all if we are to thrive in the future.

The creative process is an elusive one and every artist brings to it their own way of working. Whatever approach is used great satisfaction is there to be gained by those who involve themselves.

If we appreciated the power of creativity in all area of life then we would have less conflict and violence in our society.

Just imagine if we had an education system that was based on recognising, developing, and amplifying the creative potential of every student in whatever area that they were attracted to. This is the very opposite of what happens in our current schools with their genesis in the mass production era of the last century. In our current system only the academic survive while many students leave feeling either a failure or unfulfilled.

It needn't be so.

If the school system valued the innate contributions of every student it would result in developing a positive learning identity for all rather than the academic few. Such a positive identity would contrast with the anti social, and often self destructive, means of expression that many alienated young people currently gain satisfaction from.

Maybe that is the real lesson to be learnt from watching the works of art slowly emerging through the creativity of the artists involved?

All children are born with creative spirit and a need to make and express meaning.

It is a shame that that so few do.
Posted by Bruce Hammonds at 3:57 pm

In the olden days those who failed school often, after a few bad decisions in life, ended up by splitting hard rocks!

If school is a place set up to ensure students learn then how come so many fail?
Who is failing - the school or the kids?

Identifying innate student talents and amplifying them has never been the role of the schools. If the future is about developing the gifts and talents of all students then there is no doubt in my mind - it is the schools who are failing. Ironically fostering and developing the innate talents of the young was the means of education in indigenous pre industrial cultures.