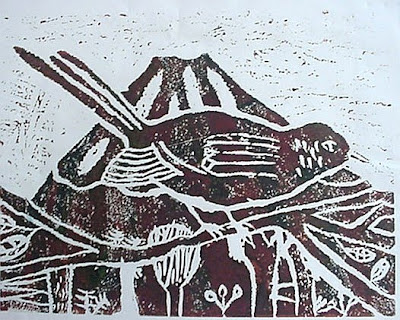 By the end of the year students had the skill to complete lino cuts of real quality - this one features a bird and Mount Taranaki. Completing such quality work will long be remembered by the children who complete them.

As I read through my diary entries there is a sense of things coming together without ever finally realizing a set daily programme as with my fellow teachers. Enough structure for both me and the thirty-eight children to positively get on with things and enough time to take advantage of ‘teachable moments’. It seems that I had avoided the over regulated approach of teachers of the time (ability grouping in reading and maths and a current study in the afternoon) and established a more learner centred environment.

The programme centred on valuing each learners personal interests (where possible) thoughts and feelings and the key to the programme was the current class study and in some times multiple studies. Building up each learner’s sense of self and to strengthen their intrinsic interests to get them to see it was their responsibility to learn and mine to assist them.

The class became a flexible mix of class themes and personalized learning and, building on my own area of expertise, based for regular small visits out into the immediate environment to take advantage of seasonal changes or things of interest. And most of the major studies involved field trips further afield as well.

A few ideas underpinned any success – ideas I had helped other teachers implement when I was an adviser. Making use of the environment for poetic language and art and for studies is one. A phrase we used a lot was 'slowing the pace’ so both teachers and students had the time to complete work of quality. Another was to ‘do fewer things well’ to avoid students always wanting to be first finished. Along with the teachers I had previously worked with students were helped to present their work so as to show continual qualitative improvements in their bookwork and study reports. Doing ones ‘personal best’ was another key phrase with children being expected to demonstrate ‘how this piece of work is is better than their previous effort and how might they improve it’.

One book became important to the children and was called their Personal Best book. This book arose because many children always wanted to share their stories with me every morning. I encouraged children to focus on a specific aspect and to really write how they felt about the experience. These pieces of writing were to be less than a page to focus on quality rather than length. This powerful form of writing satisfied many ‘non writer’ who could see the power in telling a good story. One piece of writing was crafted out each week and listed in the personal book – I helped those in difficulty slowly get worthwhile results. Such writing celebrated their personal, lives and identity. The secret to quality writing was to develop a classroom where children felt safe enough to express their personal thoughts.

Introducing focused illustrations in all their books also helped quieten the frenzy of the room. To achieve worthwhile illustrations we studied the different way artists illustrated school journals and came to the conclusion that good illustrations focus on a specific event and have a sense of action about them. We also studied journal poems in language time for the same reason and used extracts for writing practice in our language books. Finally even our maths book, featuring mostly interesting maths studies (such as maths patterns) featured illustration were possible.

This focus on doing things well provided lots of children’s work to display on the walls. Developing stimulating and celebrative room environments was another feature of the rooms of teachers I had previously worked with. Such displays always had challenging captions along with student work. Critics at the time called us the ‘pretty classroom brigade!’ Every new study was introduced by a teacher display which was then added to with finished pieces of children’s work. I taught the students simple design layout skills to help them improve their presentation. At the centre of all activity was the spirit of student inquiry – a belief that students learn best when involved in meaningful tasks is the key to real engagement and success.

Back to my diary which I might add concluded after a few months when it seemed I had managed to develop a ‘programme’ that satisfied all involved – from then on , if memory serves me right we tinkered around making minor changes until the year completed.

Most of the notes written showed the various topics undertaken. Major studies appeared to run for about four or five weeks interspersed with all sorts of, what we came to call, ‘mini studies’ or ‘one day wonders’. These ‘emergent’ studies were mostly completed in the language block. Major studies I noted at the time were based a study of Wild Flowers followed by a Museum visit centred on Colonial Times which led to an extensive integrated unit based on colonial architecture and looking at our own houses. At the same time the rooms featured the history of number and writing, patterns in maths and mini studies covering seasonal visits, a study of geckos (I had at the time a pet green nautilus elegans), monarchs and one student’s pet mice.

The success of the work undertaken was directly related to the range of inquiry, art language and presentation skills the children had been taught in those hectic early weeks and the sense of order and structure that had evolved.

My diary indicted that slowly I was getting on top of things and beginning to really enjoy the class. And, it seems, I was no longer as exhausted! Parents who visited to see their children were expressing interests in what we were trying to do. Quality inquiry work, language and the range of art on display did impress them.
Posted by Bruce Hammonds at 9:55 am

I can imagine it was quite a challenge to return to the classroon after being an adviser - more should do it! I am enjoying your reflections.Do you think the basic organisational patterns of clasrooms have changed that much?

My observations are that the basic structure have remained quite stable over the years - even ICT is fitted into existing programmes rather than creating new approaches such as personalised learning. Perhaps reading and maths ( now literacy and numeracy) are even more dominant and will get even more so with the introduction of the standards and only 'best practice' literacy and numeracy advisers to help. Little creativity ever entered the system through these avenues.

But the cry to 'engage' failing students will finally require creative programmes, and ICT will finally challenge the current linear book approach. This is not to say reading and maths are unimportant , they obviously are, but they need to be seen as 'foundation skills' and 'reframed ' to serve student inquiry and creativity. And there is nothing new in this for creative teachers. And the NZC is all about this but currently only the standards take the attention.