It is all about relationships. Bruce Hammonds teacher 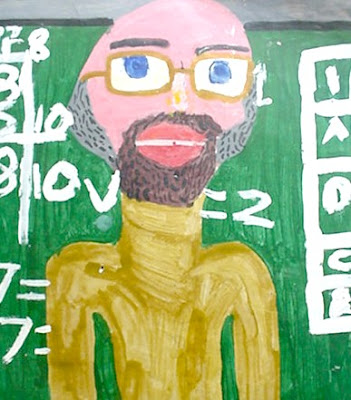 Only when students feel trust and have confidence in their teachers can they openly share their thoughts. Teaching is all about respect and relationship and to develop such things students need to feel their questions, thoughts and experiences are valued. Two things get in the way of this – teachers who see their role of ‘teaching’ children what 'they' think they need and predetermined curriculums that ignore the experiences of each learner.

Today curriculum, assessment, and ‘experts’ from outside the classroom are kings. During my teaching the curriculum ‘emerged’ or at least involved the students – if they weren’t interested it was difficult. Thankfully children are innately curious and are easily engaged. As Jerome Bruner has written, ‘teaching is the canny art of intellectual temptation’.

My first term was a learning experience and one of often regrets about my decision but by the end of the term sensible patterns had emerged. I had decided to ignore the ‘normal’ four ability grouped reading programme and the similar approach for maths. Reading was almost fully integrated with the current study using resource material I collected. Children were busy imagining a journey on one of the first ship as part of the colonial study. Maths data about passengers, ages, occupations, death rates, tonnage, distances, routes, etc were also involved. I targeted poor reader to hear them daily and always had some basic mathematical computation activities on the blackboards. I also made use of their own writing as basic reading material draw attention to such things as word attack and letter-word sound relationship.


I was determined not to be seen as failing in these basic areas –other areas I was fussy about was handwriting and spelling particularly in finished work. Such activities reassured students and their parents. By the end of the tern all students books showed real improvement which I happily shared with visiting parents.

But the main thing in the class was the range of investigative studies and the importance of the expressive arts both well displayed around the room for all to see.

I noted in my diary that ‘ I am certain that ability grouping over the years had reinforced attitudes of failure in many students particularly in maths, spelling and reading’ and, also noted, ‘that this is ironic as most teachers concentrate their efforts on such an approach to teaching’. I was determined to develop positive attitudes toward such areas.

I also developed for myself ‘a crash course in maths enough to comprehend and criticize what presently passes for maths ‘ which I felt only catered for the middle and high ability students. I decided to try to change students’ minds to what maths by making it fun and realistic and by integrating where possible. I found lots of excellent maths activities to assist me and the class and enjoyed our ‘new’ approach to maths. We called such maths ‘real’ maths and basic maths ‘practice’ maths.

The programme evolved and started with personal writing (and reading) followed by half the class on maths tasks the others on language tasks. This block also included whole class writing practice – usually poems or information that contributed to current studies. The afternoon the class worked in four study groups based rotating each day. One group with the teacher involved in a discussion, or an experiment, or learning a skill, one group working on their research, some doing another activity and another completing related art. Details of task were kept on the blackboard for students to refer to and so they could work independently. All these afternoon tasks (and many morning tasks) were all focused on presenting work to display or put in their books. Eventually each student took over a section in filing cabinet to develop their own learning folders to share with their parents.

Personal writing was an important part of the day. I noted that, ‘traditional subject teaching had done an efficient job of subverting children’s real interests and ignoring their feelings’. Poetic writing was developed through their narrative writing and by making use of incidental seasonal activities. One day two mynah birds fighting over a female outside the window took the class away from their maths to try to comprehend what was going on. Such ‘teachable moments’ were a regular feature of the room.

My diary notes that days do not away work out as planned but this is how it should be but class structures were important even if to move away from at times Children (and teachers) do need benign structures to keep them on task –and some children need more structure than others until they take responsibility for their own learning.

One thing of interest in my diary was my summing up of the abilities and attitudes of the girls and boys. On the main the girls had fewer problems and were good workers while quite a number of the boys exhibited failing attitudes and often poor behaviour. Maybe, I thought at the time, primary schools programmes seem to suit the girls? Certainly the boys took up more of my time. Another feature I noted was how much the home circumstances made such a difference to students learning – hardly an original observation but important none the less. Some homes reinforce school values, others seem neutral and others are counterproductive.

My diary finishes about the end of the term but I have few thoughts to add on reflection. I continued teaching for two more years before reluctantly returning to my advisory role.
Posted by Bruce Hammonds at 2:16 pm

So true - that trust is EVERYTHING!

Trust and mutual relationships of respect and the doing great things with kids.