The rebirth of education - a real Renaissance 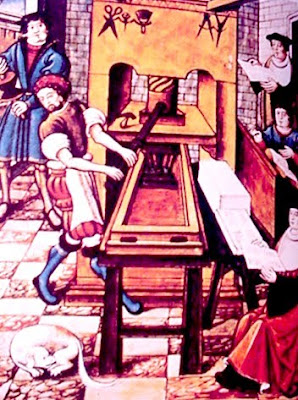 The invention, sometime around 1445, by Gutenberg of the printing press enabled books to be printed and contributed to the first Renaissance. The spread of books changed the face and conditions of things all over the world.The number of books produced in the fifty years following Gutenberg equalled the number produced by European scribes during the preceding 1000 years. By this means ideas were set free and a literacy culture challenged the prior religious oral culture, beginning the development of the scientific mind - the first Renaissance ( the rebirth)

I have also read the Renaissance was helped by rats. The great plague wiped out rich and poor in Europe, a third of the population, providing the impetus for new thinking as old systems of faith were seen as inadequate.

If the power of the printing press changed our world dramatically then the new communication technologies will even be more dramatic and even more mind changing. The old oral cultures and religious beliefs continued up until this day but the world was changed forever. The world, until now, revolved around rational linear book orientated thinkers. The world of schools.

There are some who say we are now entering a new age -'A Creative Age', or a 'Second Renaissance'. I am with them. Our current institutions, shaped by Industrial Age thinking, are no longer able to cope - they are all well past their 'use by date'. We now need new minds for the new millennium. New minds will be shaped by the new communication mediums - where ideas can from anyone, anywhere, any time. An age of inter connectivity and creativity - a new Renaissance.

It seems to me that if we are to revitalize our schools so as to engage all our students, and ultimately save our planet, it will require the death of education and its rebirth.

Our schools are not just in need of improvement. They are well and truly unable to engage all the students who enter their traditional gates. Schools, particularly secondary schools, were never designed to cope with all students. Our schools had their origins in an industrial mentality producing biddable workers for the mass production factories. The Three Rs ( the National Standards) filled the student's day. Mass or 'standardized' education.

What is now needed is a bold new planetary vision for the future - a sustainable ecological vision, a future based on tapping the creativity of all citizens .

We particularly need a powerful new vision for New Zealand; one that is more inspiring than ‘catching up with Australia.’

If we want to be recognised as a creative and innovative country, a country at the leading edge of change, then the most important asset we have is the talent and creativity of our citizens. Once such a vision has been defined then schools can follow the lead or better still be seen as leaders.

We could do worse than follow the lead of Singapore with their 'Thinking Schools Thinking Nation' motto. According to its Ministry of Education ‘thinking schools will be learning organisations in every sense, constantly challenging assumptions, and seeking better ways of doing things through participation, creativity and innovation….the spirit of learning should accompany our students even after they leave school…A Learning Nation envisions a national culture and social environment that promotes lifelong learning in our people.’

Singapore’s Education Minister explains that the big adjustment for their teachers is in the way ‘we educate our young to develop in them a willingness to keep learning, and an ability to experiment, innovate, and take risks’. Unfortunately these ideas that seem foreign to our own Minister.


New Zealand schools, if transformed, could make a significant contribution to developing our country’s capacity for creativity, imagination, and innovation. To achieve such qualities we need our education system to focus on developing the diverse creativity of all students, not just the academic students as at present.

In the meantime , like Nero, our Minister fiddles with delivering National Standards - some sort of educational castor oil.

If we do not want to suppress the creative genius of our students then we need to transform how we imagine our schools.

We need to move beyond current problem solving reforms. The future requires our schools to ensure all students leave ‘confident, connected life long learners’ as our revised curriculum asks . We need all students leaving school with courageous self images and positive learning identities with their gifts and talents developed.

Schooling as we know will have to change dramatically. Nurturing a deep engagement in the learning process will require teachers to challenge often unquestioned assumptions and structures. We now know enough to do this but only if we change our own minds first.

If we are to break through the limits imposed by the industrial age and reach towards what some are calling an Age of Ideas, or a Second Renaissance, then we need to explore new ideas.

Teachers need to stand back and take a fresh look at taken for granted assumptions. Without this ability they risk remaining locked in the habitual.

Whatever evolves needs to be built on the foundation of a solid pedagogy which reaches well beyond current formulaic ‘best practices’. We need to replace our teacher , assessment and curriculum dominated system with one premised on personalising learning. We need to move from idea that had their genesis in the first Renaissance to the emerging ideas of the Second. We are all entering an evolutionary ecological interconnected world.

Choices will have to be made. Courage will be required.

Thankfully there are plenty of inspirational ideas to call on.Ideas that many creative teachers have been working away 'underground' for decades. And thankfully there a number of schools are already well on the way.

All that is needed is the courage for other schools to leave their comfortable well trodden paths. The future demands we all make our own paths and if we do to leave tracks for others to follow. This is the spirit of the 'Creative Era' or the 'Second Renaissance'.

It is all about developing new minds for a new millennium.
Posted by Bruce Hammonds at 11:31 am

The rats might have contributed to the Rennaissance but today Mrs Tolley and her tame 'technorats' are destroying creativity - their time will come!

Schools are like the church - past their best days but hanging on to avoid grim death.

The following is not my idea but I can't remember whose in order to give credit:

Think about the possibilities if, instead of 'best' practices, we had 'permission' better still encouragement, to discover and use 'promising' practices.

To my mind, 'best' practice implies we have reached a finite ultimate in teaching and learning. That notion is ludicrous; we will never know it all. 'Promising' on the other hand implies ongoing noticing needs, searching for ways, trying them out, tweeking, building ... and noticing new needs.

This is the stuff of creative teaching and learning.

Not 'best practices' but 'promising practices'. Giving things a go and seeing what works for 'next time'. 'Next practices'; thats the secret of life - creativity - progress.