WRC Rugby is Over - applying success to our country. 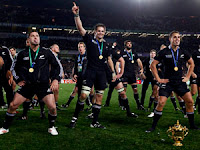 An article by Martin Hawes in the Sunday Times caught my attention.


Martin usually writes articles giving financial advice but in his latest contribution he reflects on the success of the World Rugby Cup and how its success might be applied to the wider picture of  the New Zealand economy.

The point he makes is that 'New Zealnders can do anything when we set our minds to it'. When we  have determined  and agreed somethings important nothing can stop us'. He then goes on to say 'it is a pity we don't get similarity determined about our economy. Wouldn't it be great', he continues, ' if we had consensus about future economic direction and went all out to become world betters at wealth as well as rugby? The result would be better education, better health and a better future'.

I would prefer that we widen the debate wider than the economy and wealth but the point is well made.  The next major even on the calendar are the elections but there has little debate about what it is we want New Zealand to be seen as in the future.

Hawes writes that  'there is no feeling that we are all in this together.At best we argue a bit about how we will spend the wealth we have, but little common resolve to create more of it.' As a result we 'continue our long term slide against other countries'.

Just imagine if some of the money and publicity of the World Cup were to have been spent on providing New Zealanders with some ideas of future alternatives to consider.It would have been possible to establish a range of conversations, using modern technology, to involve as many people  consider alterntives and , better still, to add their ideas to the mix.

Hawes writes that 'we have no unified dream or vision of better futures.' A vision he writes  is an 'image of what you want'.  Although Hawes's argument is centred on ensuring households have financial security his ideas apply to the wider scene.

Having such a vision drives our behaviour and if we are not clear on what maters then our actions will not result in positive outcomes. 'If you cannot decide what you want', he writes, ' then no amount of strategizing, planning or detail will help.' It is like planning a journey when you don't know if you if you're going to New York or Napier'.

'Having a vision is not only about having a mental vision of what success looks like but also what we want the wealth for'. Although he is referring to household financial success once again it applies to the wider picture.

'A vision of a future life gives the motivation' and he adds it always ' means giving something up today so you can have more tomorrow.That giving up needs a good reason and the vision is that reason....it gives it a purpose'.

It is important he writes 'to decide on what you want to achieve. This means taking time to think about about the life you want.' Once again this applies to New Zealand as a country. And it is important for everyone to be aligned behind what is decided. The trouble is in our combative political system too much time is spent running the other part down and it all becomes a either /or situation with many people not appreciating what it is we want as a country.

Hawes concludes his article by saying: ' If  New Zealand  displayed the same togetherness and sense of purpose we have put into the WRC party, we would have the best economy in the world.

As good as winning the world cup was the future of our country is more important.
Posted by Bruce Hammonds at 11:42 am

Couldn't agree more.The World Cup was wonderful but our future as a country is more important.As you say it would have been great if there had been more information about future possibilities for our country - it is too important to leave to the short term thinking of populist politicians.