Creativity not standardisation. The best book on creativity 'In The Early World' by Elwyn Richardson (reprinted 2012 )shows the way 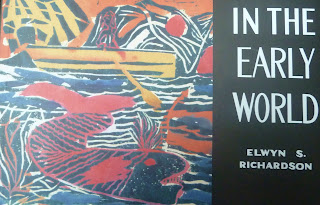 Last Friday I travelled to Auckland to the opening of a new edition of Elwyn Richardson's inspirational book 'In the Early World'. The book, as the new preface says, 'is a celebration of the creative power of children and celebrates the artistry of a sensitive teacher as he crafted a ' new' approach to teaching and learning'. The book 'offers at least a partial answer to the question now being asked again: How can we put the lives of children and our trust in their creative power back into classroom practice?'

Book available from the NZCER - order your copy now!

New Zealand teachers - share this posting with creative teachers you know as an antidote to National Standards and League Tables.

Earlier postings have featured the work of Elwyn Richardson so this blog is drawn from a new hard hitting forward written by educationalist.  Gwenneth Phillips  The original forward is also included and is worth read as well.

Elwyn's book comes at an opportune time as the current government is finally showing its true 'market forces' neo liberal competitive  ideology with its intention to introduce 'League Tables' based on National Standards data to encourage competition through students and school comparison.

Schools now have a moral dilemma - to comply to such impositions that, where introduced, have narrowed the curriculum, with teachers teaching to the tests ( national testing will be inevitable ) and the sidelining of untested areas of the curriculum such as the creative arts, or be creative. Ironically countries that have imposed such approaches are well behind New Zealand in international testing!

The choice is simple. Standardisation ( the 'McDonaldisation' of learning) or personalization that celebrates every students' unique gift and talents.

New Zealand  has had a long history of creative teaching and Gwenneth writes  that these 'teacher-pioneers became driven by the belief in the creative power of children.....laying the foundations for a child-centred approach, unique to New Zealand... Elwyn's creative approach is an exemplar of this work.' Through such an approach New Zealand schools have achieved highly on international testing.

'But....times have changed... educational decision making has shifted from such innovative educators to non teaching politicians and policy makers; and in the classroom from practicing teachers to academics.'

This new guard of decision makers' Gwenneth writes,  'juggle political, fiscal and/or research agendas' . 'Teachers' , she writes, 'have long struggled with the conflicting demands.....in particular the demands for accountability- based on the precise articulation of outcomes as well as their measurement. As a result, the basic tenants of of our unique child-centred approach...have been compromised.....the child's creative power has been strangled and the child marginalised'.

One might add so has the creative power of teachers and creative schools.

'An old challenge has re-emerged. How can we put the lives of children and our trust in their creative power back into classroom practice?' And  how can we develop trust in teachers to be creative in our present risk averse surveillance culture!

Gwenneth believes this new edition of Elwyn's book is both timely and important, for this challenge is at the heart of present debate. It presents a backdrop to current issues in education and to teachers' concerns - the narrowing of the curriculum, the setting of externally prescribed adult motivated progressions and outputs that neglect the developmental nature of learning'.

The book has two stories - the story of Elwyn an innovative teacher breaking away from a teacher dominated approach and learning to trust the creative power of children.

Elwyn 'dsicarded the official syllabus and turned to the children's lives and immediate environment for the basis of his curriculum. Using the children's natural curiosity and interest, Richardson taught them how to observe closely the world around them and to record their new discoveries and their own responses to these. From here, he developed a school programme that was anchored in the children's surroundings and real lives'.

'Through environmental study the children learned the basis of scientific method, and brought these  skills to bear on studies that spanned all subjects. His method was a revolt against the treatment of science as a separate subject in favour of an integrated programme of arts ands science.'

'The second story is told through the voices and imagery of the children's own work. This  story captures the universal experience of children " learning to be"- to be members of a caring and respectful community of artists, craftspeople, scientists, historians, inventors, reserachers'.

'Success in these stories were sustained by the knowledge and professional artistry of a caring teachers who esteemed the voice and thinking of the children.' As Elwyn himself writes, ' they were my teachers as I was theirs, and the basis was sincerity, without which, I am convinced, there can be no creative education.'

This second story is exemplified today in the all but sidelined 2007 New Zealand Curriculum  which asks teachers to see their students as active 'seekers, users and creators of their own knowledge'.

The way of working captured in Elwyn's book are 'in stark contrast to that have emerged in the last decades. Current ways are based clearly articulated and predetermined pathways.The children are forced to state goals and are evaluated through criteria and standards that conform not to their own understandings of themselves in the world, but by expectations dissected from the forms and structures of adult thinking.' These approaches Gwenneth writes, 'are the antithesis  of child centred approaches.They marginalise children and show little respect for their creative power to develop their own life-learning pathways'

Unfortunately many school are well down this imposed formulaic 'best practices' approaches . Gwenneth writes  , 'for many teachers, especially primary teachers, the knowledge and professional artistry of their child-centred practice has been usurped; the courage and tenacity of the pioneering spirit stifled; and the recognition and trust of the child's creative power has been undermined.'

The aesthetic quality of children's art work, the accuracy of their scientific observations and the quality of language in Elwyn's book 'should inspire and convince teachers'.

'In The Early World, together with the stories of other early pioneers, tempered with new insights...has the power to inspire a '"new" guard of educational pioneers'. It is a book that 'celebrates the pioneering spirit of New Zealand tecahers'.

Please share this blog with creative teachers - before it is too late.

It is hard to understand why, 50 years later, this message is still being ignored. I note Elwyn was at the ceremony, and i wonder what he thinks of the current debacle, a complete antithesis of his great work. I can't help feeling a degree of pessimism that this flame is dying. While national standards & league tables will be discarded in time, the damage, I fear, will have been done and the 'system' will be locked into 'achievement', 'effectiveness', 'good schools' and so on - a case of lesser evils rather than no evils. However Elwyn achieved great things in the climate of the time, so I guess that all is not lost as long as 'heretics' like you, Kelvin, and other like minded people keep promoting 'there is another way.'

You are so right Allan. Why the current government wants to follow failed neo liberal 'market forces' ideology is beyond me - I guess that is the power of an ideology - it blinds those who hold it to other ideas. Politicians should look towards Finland, Korea and Singapore that follow almost the opposite approach and successful schools and teachers in New Zealand. Our job as 'heretics" ( a person with an alternative point of view) is to encourage those few creative teachers and schools that still exist.