One rule for the rich it seems! 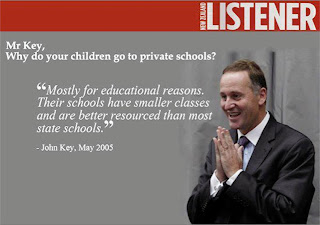 Private schools - their claim to success ( other than having wealthy clients) is small class sizes. Check out the schools the elite of the National Party go to. Lets the rest eat cake - or be crowded in classrooms.

I loved this letter in our local paper - The Daily News. ( Friday 1st June)


I think you you are all parents, so you will be aware of the fundamentals.

Kids are full on, regardless of their background, social standing, academic abilities, personalities or any other factors.

I have three sons of my own and I coach 11 girls for a netball team.

My netballers fizz with enthusiasm, but they also talk - often several of them at once - ask questions, don't listen, fidget and fuss.

Even if I buzzed with whizzy ideas, I might want to throttle a few. I know that because my own kids test my patience. In public they're model offspring. At home they bicker, argue, demand, sulk and exhaust.

It's funny, though, but when there's only one in the house or eve two, the dynamics change and they're easier to deal with.

They get much more time. You reckon, however, that putting more of them in a class won't affect teacher quality.It's  an odd proposition. You say there's evidence to back up the assertion but I'm cynical.

Even with the "best " teacher in the world, it's inconceivable that more kids. more noise, more demands., won't affect the quality of their tuition.

Then there is the associated bombshell - a change in staff ratios that will force intermediate schools to cut cooking, ICT, workshop technology and arts teachers.

Maybe, it won't be so dramatic.Now there's Governmental talk of schools losing a maximum of two teachers.Still, I'm baffled by the numbers and not the least reassured, because that's just an interim measure.In three years the fulls cuts will take effect.

I have an eleven year old at intermediate.He hasn't done tie cooking classes, but I'm waiting for the sparks to be kindled because he a little hopeless in the kitchen.. So far he's had a whirl at visual art and now is on to ICT.

Intermediate schools vow they will retain specialist technology teaching, although to do that class sizes will swell.

It wouldn't be overstating it to say I have grave fears for my two children yet to arrive. at intermediate school: the nine year old loves cooking and the five year old, a ferocious drawer. They'll arrive when classes are bulging.

Sure we could cook at home and we could draw, but really we are only one family.

What about the parents and caregivers loaded with financial worry, work stress, family issues and housing difficulties?

It's hard to clear head space for lighthearted kids time when you're plagued by problems.

So an immeasurable number of kids could miss out - either because their class is bursting or there are few specialist tech classes to break up the grind of the core subjects.

The other reality in this educational calamity is National Standards.

They were introduced, you said, to sweep up our purported tail of underachievement. There had to be a way of of measuring standards and pinpointing problems.

Why cut the hands- on subjects that might rouse those same underachievers?

When you are a parent, it's good to admit your mistakes.We grown ups get it wrong.Saying sorry can garner the kid's respect.

Mr Key, Mr Young and Ms Parata, you could do that. Say something like " We were desperately trying to save money, so we got the our officials to dream up something.Unfortunately, those officials last entered classrooms when inkwells sat on desks.Their ideas are stupid. We should not have listened.We're going to stick with an educational model that has worked for decades and save money instead by cutting ministerial perks.

" Sorry for our botch-up and lack of honesty".

And while you are at it , raise rather than punish teachers.

When I want my kids to really do something I ooze positivity.

The results are astounding.

What a supportive letter . I wish our polcy makers had such an insightful understanding of the realities of being a classroom teacher.

Outstanding comments. Clearly a parent who doesn't send her kids to a private school for smaller classes.
Insighful and supportive of the classroom teacher's task.

Kim Jon Key and Hekia the Parrot ( although she seems to have lost her masters voice) are following the corporate model. See last blog

ohh.. What a blog ! Amazing, I really support your view.Crowded classroom does not help in achieving education.