I remember the day when the first news came through that Darwin had been bombed. The Japs knew how to spoil my 14th birthday. We school kids mirrored the grim faces of our parents and teachers; another ‘Pearl Harbour’ was right on our door-step. Things were very, very serious. 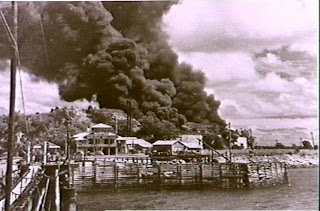 As far as almost all Australians knew, Darwin was bombed for a couple of more days after that ...and all was clear. It wasn’t until the end of the war, over three years later, that the Australian population learned that Darwin was bombed over fifty times, but the news was hidden for morale purposes. Someone somewhere controlled the supply of news.
Over one thousand primary school principals from Australia and New Zealand gathered in Melbourne on 18-21 Sept. 2012 to discuss issues attached to ‘LEADING LEARNING’. It was meant to be huge and it was. It was meant to be forthright and meaningful and it was. For those who attended, it was a huge event. For many, it was a once-in-a-life-timer.
The conference had been advertised and marketed with outstanding style for world to see, for the Australian and New Zealand public to learn more about the principal’s place in leading pupils through vital learning experiences during these tumultuous times; and press releases were made on Conference Eve and through the period. All sections of the media knew what the conference was about and where it was located.
For parents, grandparents like me, teachers, and for those interested in primary schooling, there was a promise of headlines in the daily press to inform us of the world’s best practices and what Australia and New Zealands’ pupils and parents could look forward to....especially the place of NAPLAN and ‘National Standards’ in the processes of leading learning in schools.
Things looked so promising. .
NOTHING IN ANY NEWSPAPER OR ON ANY TV OR RADIO NEWS. ABSOLUTELY NOTHING.
HOW COME ?
Should we imagine that a covert embargo on expert-based professional comment is an extension of the overt government control of professional opinion and action at the school level?
Too close to a conspiracy theory isn’t it....but ...it is weird, isn’t it? How?. Why?


Thank God for Google. Here you can find audio clips, abstracts, a full text or two on a well organised site. Click...
http://www.appa.asn.au/index.php/conference/2012-melbourne
I have listened to the learned presenters and authors on this site. An hour each spent on the provoking opinions, statistics and anecdotal evidence with Andy Hargreaves, Pasi Sahlberg, Kishore Mahbubani and Yong Zhao means four hours well spent....and to then read their books! Trust me. Their cogent, thoughtful views should be of enormous assistance to those principals and officials, whom we trust to Guide Our Nation’s School Kids Intelligently. One such person, a local keynote speaker, Tony Cook of the Department of Education etc., forewarned the unsure, however, with his well-presented, well-organised paper illustrating that Australia principals will be required to get their NAPLAN scores up to scratch according to the 2025 Gillard Goals. They will! He concluded his address, “ And if you have done that, then you will truly have helped to make the world a better place, and your contribution will have been an immeasurable one.” ?
Tony Cook’s viewpoint was unremarkably similar to that of Peter Garrett, the Australian Minister for Education and other things, who spoke of his government’s plans for the future. Peter boasted to our visitors:-
“We now have a national curriculum, national teacher standards and a national teacher performance and assessment framework.”
“And there is more to do – a second wave of reform is underway
“Between 2000 and 2009 our performance overall, declined relative to other countries.”
“ By Year 9, a student from the poorest quarter of Australian schools is, on average, up to three years of schooling behind a student from the wealthiest quarter of the population.”
“We are prepared to invest substantially more in our schools, but only if there is agreement from state governments to a National Plan for School Improvement. Our plan will help us to see Australia ranked as a top 5 country in the world in Reading, Science and Mathematics by 2025. The Gillard Government intends to continue to work in good faith with state and territory governments, the Catholic and Independent school sectors to deliver our plan. We have a once-in-a-generation opportunity to get this right. It is an objective that has escaped us as a nation in the past.”'
“I know it’s an objective that you share.”
It is fortunate for Peter that he was not present for all of the conference, because he prefers hard evidence from tests and tends to ignore child-oriented provocations. Testees are children and they have no feelings nor thoughts....can’t vote. Classrooms teachers don’t care....and Principals are on side....as he indicated. The presentations by world reputed thinkers would have made him feel uneasy. But then...
He’s on a roll. The objectives are shared with Australian principals [he said]. {Are they? That’s a worry.} 2025! Here come the heavies!


Preferring to trust the opinions and anecdotal evidence of experienced commentators, I went seeking through the papers to find some solutions for the needs of ignored present-day school children. I went looking deliberately for statements about leading-learning that might apply to NAPLAN [Aus.] and National Standards ]NZ] testing; and help such pedagogical purulence to be banned. The tests are so evil and nasty. I found a gem.

Paul Drummond Paul Drummond, President of NZPF, said directly to both NZ and Australian politicians...to their face :
”You have unravelled a first class schooling system [NZ has always been near the very top on PISA]; you have removed the right of every child to follow the richness of a sound curriculum along multiple pathways; you have not invested wisely; you have replaced collaboration with competition; your adoption of GERM principles has caused great sadness; your gimmickry [e.g. charter schools] is unprofessional. You have altered our children’s social future.”
He said to his colleague principals from both sides of the Tasman
: “ Our profession has been under siege. We share the despair of working in a system that is entirely political and not educational. Morale is low in both countries. It is such a difficult time in which to live. We are being used as political pawns. We need to strengthen our moral purpose and stress our professional ethics courageously and loud.”
“Let’s stay true to our moral compass.”
This was the most profound address of the conference. Listen to it carefully. My summary does not do it justice.


Some extracts and quotable quotes from other distinguished visitors ....
Kishore Mahbubani [Singapore]
“ The West’s domination has been an aberration in world history, and all aberrations come to an end. Now that the west is receding, the two western countries left in Asia are New Zealand and Australia. They will have a positive future but they will need different mental images.
“China is having a sputnik moment; the US needs one as well.”
“The most optimistic people in the world are young Asians.”
Andy Hargreaves [Boston College] 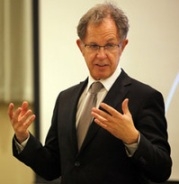 “Globally, we are poised on the edge of a great transformation of what teaching and learning will look like and how schools will appear to us. It will be the greatest change since our present industrial model of schools started in the 19th century.”
“The issue is about Professional Capital. We need to promote the concept widely – Capital includes social capital, human capital, natural capital. It you want a return, you need to make an investment.”
“We cannot replace teachers with technology
“We must be proud of who we are and what we do. Teaching is the most valued profession in the world. BE PROUD.”
”How does your government see you? Does it understand? Do politicians appreciate the joys of teaching and learning?”
How many years at the work-face does it take to become an efficient, experienced teacher?
“Unions need to become the agents of positive change as they used to be.”
Pasi Sahlberg [Finland]

“There has not been a miracle in the education system, in Finland.”
Equity rather than choice is the keynote of the system; co-operation rather than competition; individualisation rather that standardisation [the enemy of creativity].
“GERM Global Educational Reform Movement [market-based thinking about education]; competition [among schools], standardisation [setting standards and then measuring], school choice [private vs public], test-based accountability [high stakes testing] has become the way of thinking for a number of countries. Australia is hot and strong on this, as well as NZ.
GERM LEADING-LEARNING
Test core subjects only Teach broad & Creative Learning
Standardise – same skill for all Customise – ‘each one is different’
Encourage pre-test panic Each at own pace – NBT [No Blanket Tests]
Adopt ideas of corporate world CHILD as inspiration for change
Rant measurement numbers Share evaluation as part of learning
Drill and skill Look to future, play & dare to dream
“Does GERM work ? Maths results are declining in GERM countries. Finland’s results are up.”
“Students in Finland have less classroom time [190 days per year] and are given less homework, so they have more time to play [that’s what a kid’s job is – learning to understand how their mind and imagination and body work.”]
“When they take the PISA test at age 15, Finnish kids have had 4 fewer years of schooling all told than Australian and New Zealand kids. Finnish kids start school at age 7. Australia and New Zealand start at age 5.”
“People think that choice enhances equity and equality – it does the opposite. Highest performing countries combine quality with equity.
“Lessons from Finland:
Yong Zhao [Oregon]
“Where are we? How did we get in this mess? 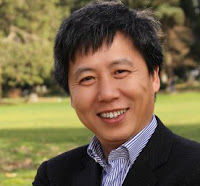 What do you want to do?
What kind of education do you want for your kids?”
“There’s a new middle class – the creative entrepreneurial class – filled with new ideas, confident, developmental, exerting leadership qualities with ease.
Global homogenisation is not the way to go. The drive for higher test scores does not produce confidence, energy nor passion to succeed. Why teach a fish to climb a tree?”


Fortunately for NZ and Australian politicians and testucators the Conference material has been kept secret and not made public!
Our children will be stuck with NAPLAN and National Standards.
Darwin will continue to be wrecked; and the public won't know.
Posted by Bruce Hammonds at 7:10 pm

Thanks for sharing Phil's ideas - it is great that he hasn't given up the fight for what is right in education. How could an independent press ignore such importnat presenters. Says something about the press - it seems to apply to our own press in NZ!