This a copy of Phil Cullen's blog,To find out who Phil is follow this link
Phil was very impressed with Paul's presentation and I thought it also worth sharing.


President of the New Zealand Principals’ Federation and co-host of the recent APPA-NZPF Melbourne Conference, Paul Drummond presented this forthright speech at the opening of the conference. There was no report of the conference nor the papers presented by distinguished guests, in any section of the Australian media. This blog provided extracts from Paul’s speech. Here is the original.
“Around the globe, particularly in the west, governments are adopting an economic agenda for education. That means increasing privatisation and reducing state support of quality public education.


Wherever the economic agenda has been implemented we can see common features of economic reform.
These include:
The economic agenda is not supported by any theory of learning or teaching, nor any theory of assessment and evaluation. Academics are as bewildered as we are about how this agenda can possibly be good for education. International experts tell us that top of the list for 21st century learning should be skills to encourage innovation, creativity, critical thinking and entrepreneurship. These are expansive concepts. They won't be achieved in a narrowly focussed high stakes environment.
Countries have tried these ‘standards’ systems before. We had one in New Zealand in the 1880s. Let’s take a stroll ---back...to the future!
Paul then presented illustrations of the ‘Standards regulations’ of 1878-9 and the responses to them. 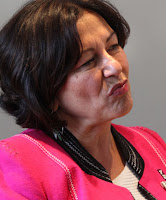 We could easily believe that our current Minister had raided the archives and just hauled out this 140-year-old plan and called it National Standards. The likeness to what we’ve got now is breath taking! And for what?
Right now, New Zealand enjoys a very high position amongst OECD countries for educational achievement in literacy and numeracy and science. Those countries still up there with us have not adopted an economic agenda for education. Finland, Singapore, the city of Shanghai and Korea have all resisted. So have we, until now.

Bruce, thank you for an excellent referral.

Thanks Ivon - I thought it worth sharing.

As you know, Bruce, Phil Cullen is a real gem and his blog and website are well worth exploring.

Thank goodness for people like Phil- he does a wonderful job of trying to open the eyes of Aussie teachers.