Back to basics - quality creative learning in art. The power of doing something well.


There have been times when I have felt that others have thought I was old fashioned.

When I was a principal in the late 80s a BOT member pushed hard for the school to buy computers  , which, at great expense, we did. Ironically the BOT member never inquired as to how they were being used. We just had to be seen to have them!!

My feeling was, that as powerful as they potentially were, they were being oversold and underused.

Even a previous 'silver bullet' of 'higher order thinking' ( HOT ),  or ' twenty first century thinking' skills, both approaches that valued learning processes above content, all too often results in 'thin learning'.

I relate back to wise words from Elwyn Richardson, New Zealand's creative pioneer teacher of the 50/60s who said 'a study without real content is a study at risk'.

When I visit classrooms today, or view videos and photo albums of modern learning environments,  I am appalled about The lack of evidence of in depth thinking and quality creative artifacts. Elwyn would despair.

I was discussing the issues above with a retired very creative teacher, recognized for the in-depth studies undertaken by his class, and a recently retired respected principal who, in schools he led. was recognized by the quality of the work the students completed.

The principal concerned mentioned that, in his opinion ( and mine) that classrooms are full of 'three quarter page kids' - students who never get around to finish whatever they set out to do. And I would add book work that show little qualitative improvement in content and design from February to December.

Early in my career I learnt from the Director of Art Education, the late Gordon Tovey, of the power of the completion of something worthwhile - in any area of learning or life.  That the product was just as important as the process - the process is a means to an end.

The same thing applies to learning ( and practicing) techniques and skill involved in any learning. Once again they are a means to an end and cannot be left to chance, or introduced once and never practiced in meaningful situations. Recent research has shown that it takes 10000 hours to develop real expertise in any field and that , as important as innate talent is, effort and practice are as, or more, important.

Going back to the thinking skills movement one of the important skills mentioned is the importance of effort, perseverance , 'grit' or 'stick-ability'. All too often students bring to their classwork the idea of 'first finished is best'. Classes are full of  students who give up too easily, or students who have come to believe they don't have the ability to achieve or don't even try. All too often such demeaning attitudes have been created by the consequences of ability grouping or lack of focused 'catch up' help.

All the above ideas point out the vital role of the teacher to assist all students work towards their potential - to ensure that all students have the ability to 'seek, use and create their own knowledge', as it wisely says in the 2007 New Zealand Curriculum. If teachers do not do this then students will leave as one writer has written 'wounded by school'.

One book that inspired me when I was a teacher was a very 'strange' ( and now out of print) book called 'The Unfolding of Artistic Ability' (1961) with, very appropriately, an introduction by John Dewey.

Although it dealt with artistic ability its message applies to any area of learning. This book, particularly through illustrations , shows the amazing artistic development of all sorts of individuals - so called 'mental defectives', borstal boys, retired people - all were able to achieve amazing artistic results.

One example, David, illustrates the unfolding of such achievement.

David was a 20 year old 'delinquent'  in a reform school with an IQ of 76   lacking in self confidence and social skills.

He was asked to draw whatever he liked and drew a horse  which could have been done by an 8 year old boy. He liked horses but dismissed his effort as  'it's no good'. Never the less he was stimulated to try again and this second drawing showed improvement and David expressed how he might  improve his next effort.

After four weeks he was aware of his progress and was keen to make his next effort even better. The discovery that he was able to perform unexpected tasks gave him courage to continue. 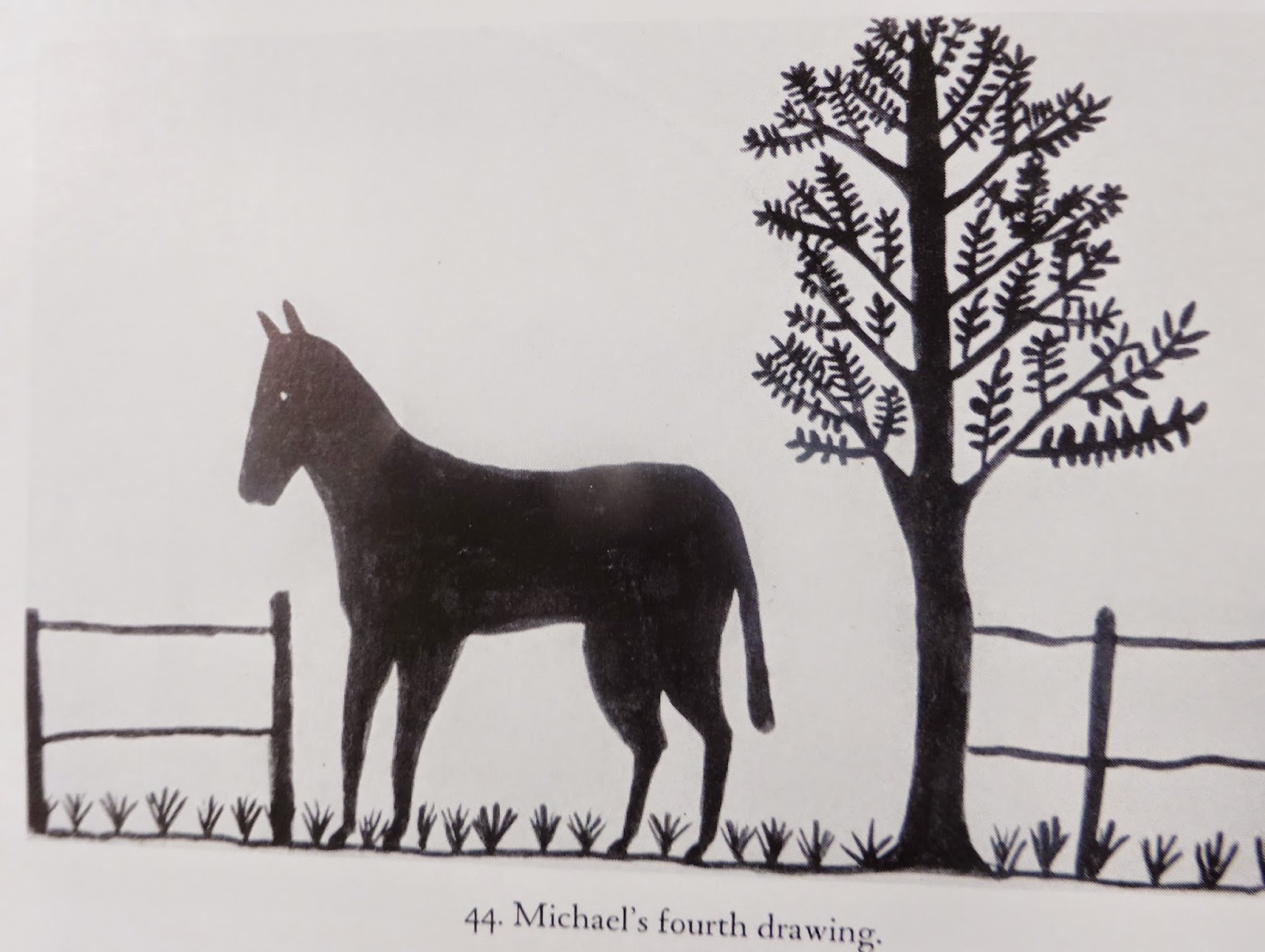 After several months of improving his ability  he became involved in  perfecting a clay relief of a horse. This relief involved him in a lot of decision making and judgment. -  he was now determined to make his own decisions. There was nothing to be seen of his previous passive and timid approach. The task kept him busy for a week.

With incremental success, and encouragement, David gained both courage, energy and self confidence -  an example of the 'unfolding of natural growth of his inherent abilities'. 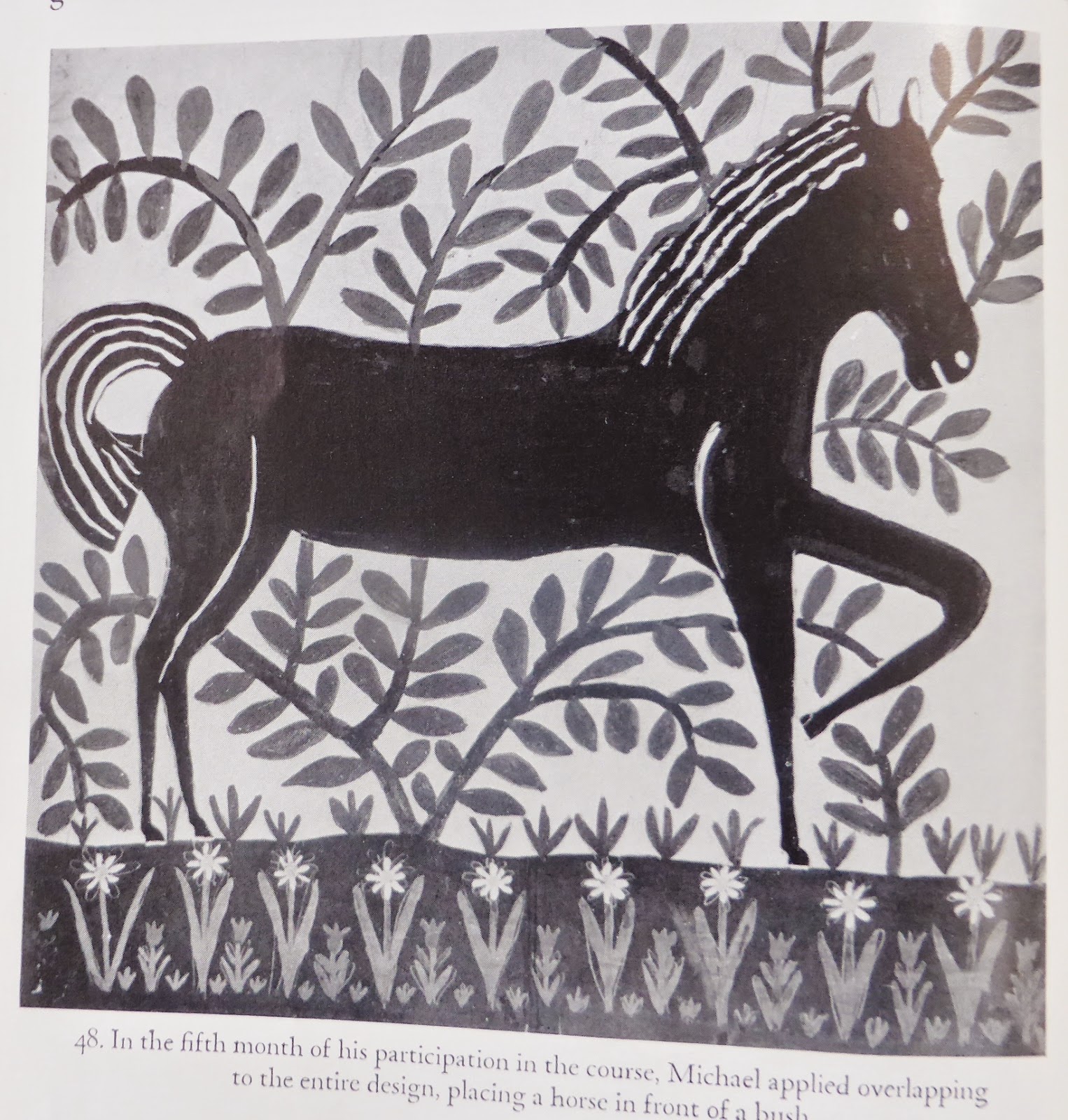 After seven months David achieved his last work a horse modeled in clay and cast in artificial stone. It is worth comparing this with his first efforts.

In my class, and later as an adviser and principal, I determined to apply the lessons gained from the book. 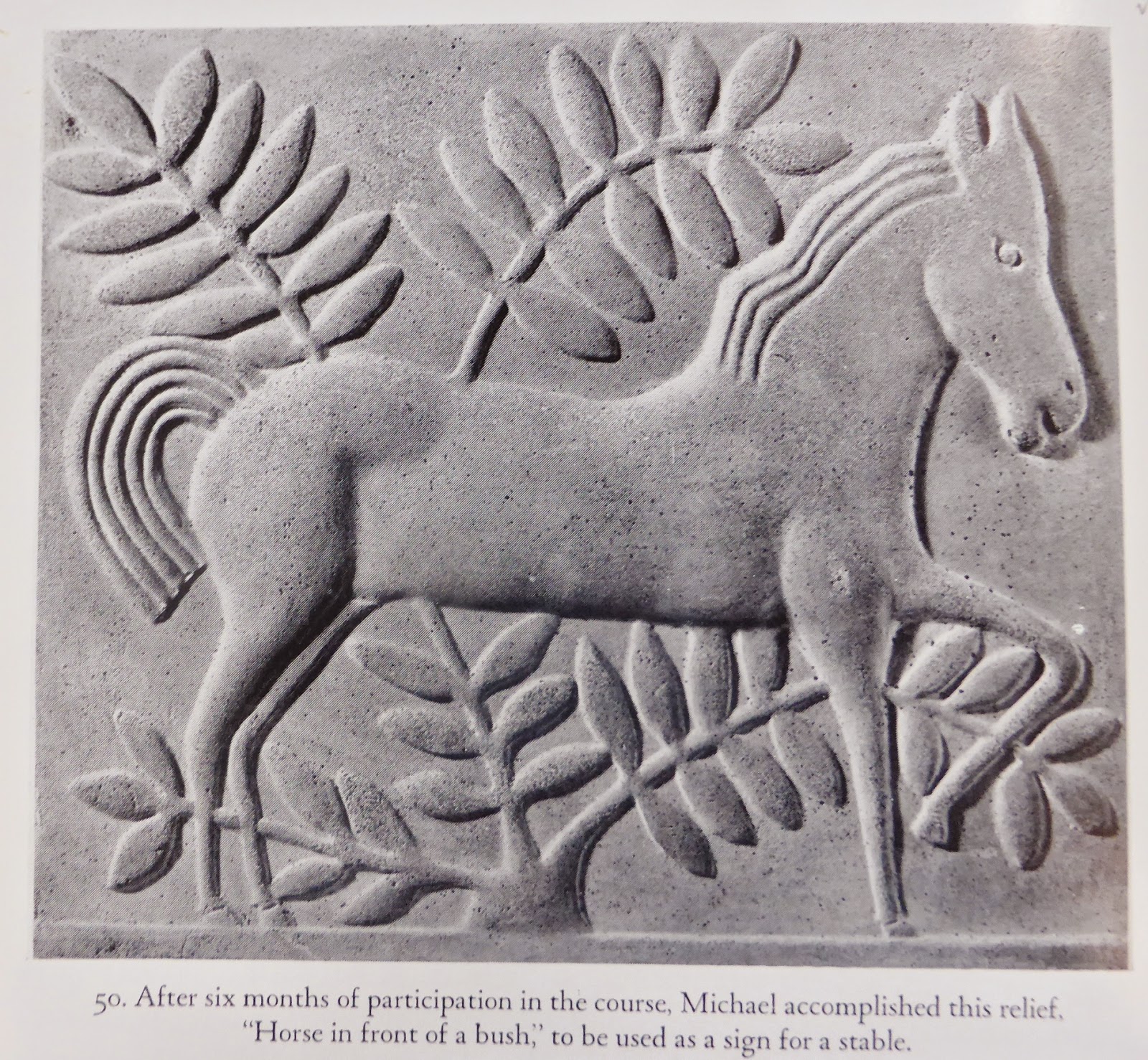 Children's book work ( or any work involving content and presentation) should show continual qualitative improvement - as should their belief in their ability.  One of the best books to show aesthetic improvement was the handwriting book - in which we included short poems and small illustrations.

We introduced the concept of' personal best' - encouraging children to set their own future improvements in their work. This applied to all activities across all aspects of the curriculum. Seeing is believing both for the students and their parents. Room environments were seen as  a  'message system' - exhibiting well displayed science, research, language and art work. Rooms reflected the quality of work seen exhibited at science, maths, technology or art fairs. 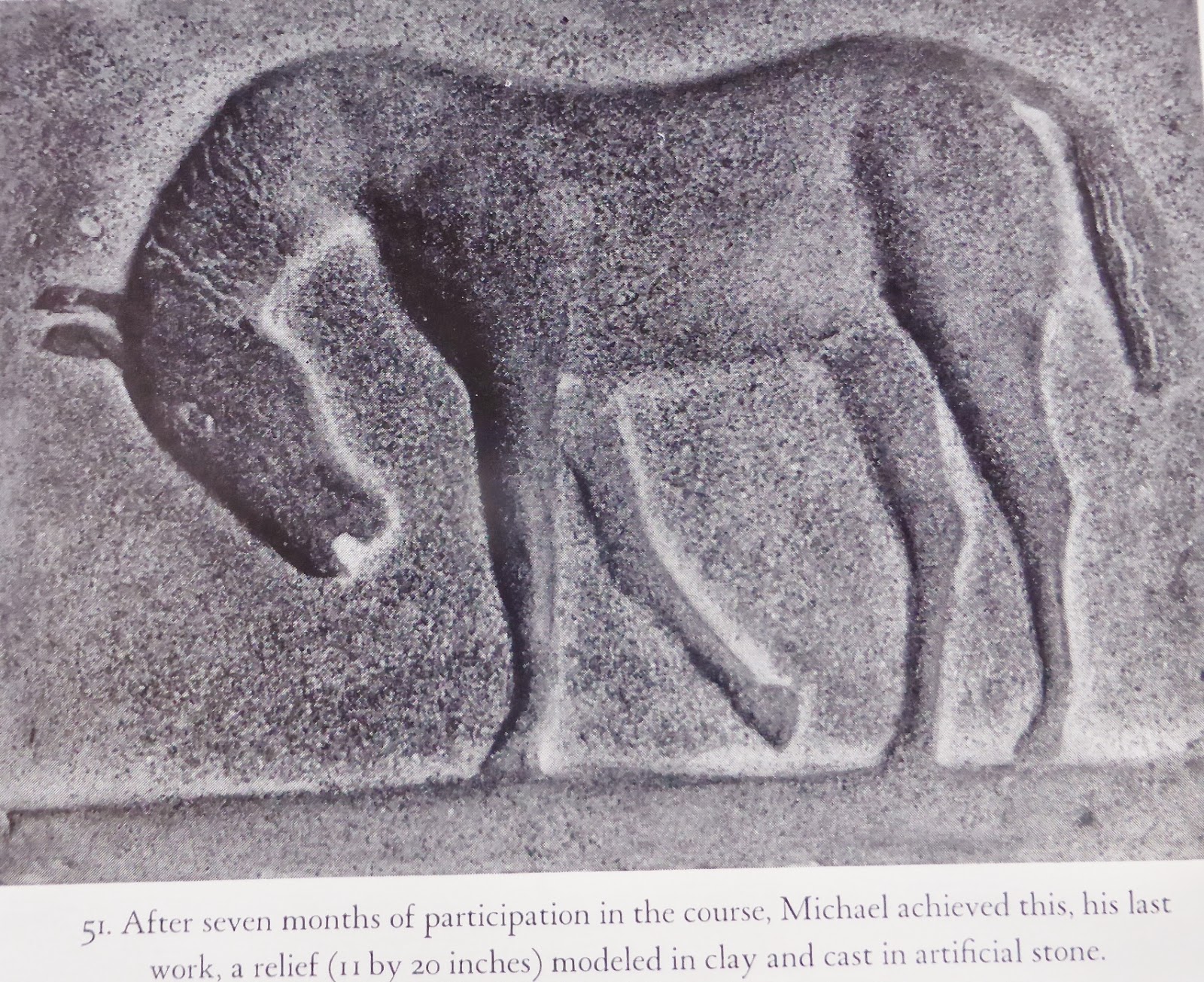 Teachers helped students 'slow the pace' of their work to avoid the 'first finished best' desire.

This slowing the pace to develop deep thinking applies also to language as well - check this link 'death of a Viking chief'.

Teachers implemented the idea of 'doing fewer things well'; focusing on in-depth student understanding. Later the Japanese idea of Kaizen  was introduced - the importance of incremental improvement. Students were encouraged to reflect how is this piece of work better than their previous effort and what will they improve next time?

Quality results were only one part of the equation - the work created also need to show the 'voice', 'identity', or idiosyncrasy of the learner.

As students move through the school system their work should show greater and greater variety . All too often my classroom visits ( and viewing on my computer of modern classrooms) shows just the opposite - formulaic , so called 'best practice', conformist teaching devoid of real creativity.

Experience of excellence comes from:
'Mastering at least one thing supremely well. It can be anything – music, mechanics, motorcycle racing. If you don’t go deep into something, you don’t know what extraordinary performance is. You get satisfied with ordinary performance. And if you have never experienced it yourself, it’s hard to be a role model. Without an experience of excellence, you won’t appreciate the quality in others.’
Harry Davis University of Chicago.

Ideas  rather old fashioned maybe  but as relevant as ever even in a modern learning environment?

How would David fare in your school or class? 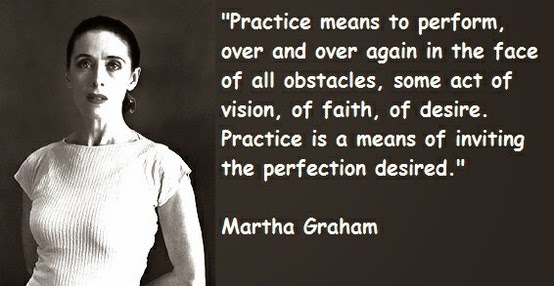 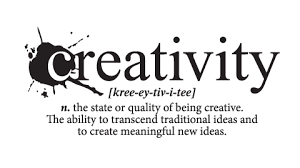 Posted by Bruce Hammonds at 1:01 pm

Inspiring stuff Bruce. Many thanks - and old fashioned or not still important. If you are going to do something do it well and improve over time. A lot of 'thin' learning around in our schools!

I believe the secret to get students engaged in learning is to help them do something really well - something beyond their expectations.

Equally important is to value the individual style/creativity or 'voice' of each student.

Obviously the arts are an ideal area as so many students ( past the age of 7) begin to believe they can't do art and good teaching can reverse this self doubt - see David in the blog.

The ideas of improving beyond expectation can be done in any area of life with the right environment/conditions and subtle help.

Appropriate practice is vital as is an appreciation of effort - by such means students develop the 'growth mindset' that Carol Dweck writes about.

Anybody who has succeeded in the arts, sport or anything knows this.

I can imagine teaching teams putting such simple ideas into practice - helpers need to have an in-depth appreciation of whatever activity is involved. I see teachers as creative coaches knowing when to help and when to stand back and observe. This is the artistry of a creative teacher.

Now put such a team of teachers in a 'modern learning environment and it would be magic!

Couldn't agree more. Keep up the good work Bruce. We need your point of view